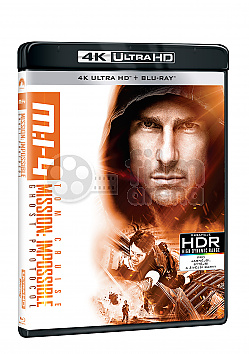 In the fourth installment of the Mission Impossible series, Ethan Hunt and a new team race against time to track down Hendricks, a dangerous terrorist who has gained access to Russian nuclear launch codes and is planning a strike on the United States. An attempt by the team to stop him at the Kremlin ends in a disaster, with an explosion causing severe damage to the Kremlin and the IMF being implicated in the bombing, forcing the President to invoke Ghost Protocol, under which the IMF is disavowed, and will be offered no help or backup in any form. Undaunted, Ethan and his team chase Hendricks to Dubai, and from there to Mumbai, but several spectacular action sequences later, they might still be too late to stop a disaster.

On assignment in Budapest to intercept a courier working for a person of interest code-named "Cobalt", IMF agent Trevor Hanaway is killed by an assassin named Moreau. Hanaway's team leader, Jane Carter, and newly promoted field agent Benji Dunn extract Ethan Hunt and Hunt's source Bogdan from a Moscow prison. Hunt is recruited to lead Carter and Dunn to infiltrate the secret Moscow Kremlin archives and locate files identifying Cobalt. Halfways through the mission, someone broadcasts across the IMF frequency, alerting the Russians to Hunt's team. Although Hunt, Dunn and Carter escape, a bomb destroys the Kremlin and Russian agent Sidorov accuses Hunt of masterminding the attack.

The IMF extracts Hunt from Moscow. The Russians have called the attack an undeclared act of war and the US president activates "Ghost Protocol", a black operation contingency that disavows the entire IMF. Hunt and team are to take the blame for the attack, but will be allowed to escape from government custody so that they may operate to track down Cobalt. Before Hunt can escape, the IMF's secretary is killed by Russian security forces led by Sidorov, leaving Hunt and intelligence analyst William Brandt to find their own way out. The team identifies Cobalt as Kurt Hendricks, a Swedish-born Russian nuclear strategist who believes the weak must die for the strong to survive, and so plans to start a nuclear war to start the next stage of human evolution. Hendricks bombed the Kremlin and acquired a Russian nuclear launch-control device, and now needs its codes from the Budapest courier in order to launch a nuclear missile at America.

The exchange between Moreau and Hendricks's right-hand man, Wistrom, is due to take place at the Burj Khalifa in Dubai. There, Hunt's team-members separately convince Moreau and Wistrom that they have made the exchange with one another. However, Moreau identifies Brandt as an agent. While Hunt chases Wistrom only to realize Wistrom is actually Hendricks in disguise as Hendricks escapes with the codes Carter detains Moreau. Moreau attempts to kill the inexperienced Dunn, and Carter throws her out a window to her death. Brandt accuses Carter of compromising the mission for revenge against Moreau, but Hunt accuses Brandt of keeping secrets from them, as he has displayed fighting skills atypical of an analyst. While Hunt seeks more information from Bogdan, Brandt admits he was assigned as security detail to Hunt and his wife Julia while on assignment. Julia was killed by a Serbian hit squad, prompting Ethan to pursue and kill them before he was caught by the Russians and sent to prison.

Bogdan and his arms-dealer cousin inform Hunt that Hendricks will be in Mumbai. Hendricks facilitated the sale of a defunct Soviet military satellite to Indian telecommunications entrepreneur Brij Nath (Anil Kapoor), which could be used to transmit the order to fire a missile. While Brandt and Dunn infiltrate the server room to take the satellite offline, Carter gets Nath to reveal the satellite override code. But Hendricks has anticipated Hunt's plan and takes Nath's servers offline before sending a signal from a television broadcasting tower to a Russian nuclear submarine in the Pacific. The submarine fires on San Francisco. Hunt pursues Hendricks and the launch device while the other team-members attempt to bring the broadcast station back online. Hunt and Hendricks fight over the launch-control device before Hendricks jumps to his death with it to ensure the launch. Dunn kills Wistrom, allowing Brandt to restore power to the station and enabling Hunt to deactivate the missile. He is confronted by Sidorov, who sees Hunt has stopped the missile, proving the IMF is innocent in the Kremlin bombing.

The team reconvenes weeks later. Hunt issues them new assignments. Brandt refuses to accept the mission, but Hunt reveals that Julia's death was staged, as he knew he could not protect her and used her death as a pretext to infiltrate a Russian prison and get close to Bogdan, an IMF source on Hendricks. Relieved of his guilt, Brandt accepts his mission while Hunt watches Julia from afar. They share a smile before he goes off on his next mission.