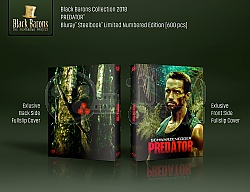 - WWA generic single disc SteelBook
- Blu-ray with two versions of the movie in 3D and 2D
- optional 4K UHD disc (if the customer accepts 4K UHD disc for an additional charge of 399CZK, the disk will be added to the steelbook / the customer can reject the 4K UHD disk in the basket and keep only the 3D / 2D  Blu-ray disk in the steebook)
- Exclusive FullSlip with an attractive finish
- Exclusive collector's cards
- Exclusive 36-page booklet
- Exclusive outer sticker indicating serial number of the edition
- Exclusive numbered hologram sticker.

This edition will not be available for free sale due to the full capacity of pre-orders. For those who are interested in this edition, we recommend that you click on the I WANT TO BUY button until it is hidden.

A team of commandos on a mission in a Central American jungle find themselves hunted by an extraterrestrial warrior.