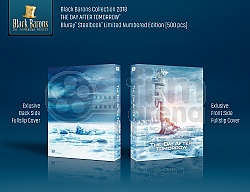 The Day After Tomorrow / Blu-ray SteelBook

we kindly inform you that the pre-order and reservation capacity of premium edition BLACK BARONS #13 THE DAY AFTER TOMORROW has been completely refilled and this edition will not be available for free sale.

Thank you for your orders and interest.

As Paleoclimatologist named Jack Hall is in Antartica, he discovers that a huge ice sheet has sheared off. But what he does not know is that this event will trigger a massive climate shift that will affect the world population. Meanwhile, his son Sam is with friends in New York to attend an event. There they discover that it has been raining non-stop for the past 3 weeks, and after a series of weather-related disasters begin to occur over the world, everybody realizes the world is entering a new Ice Age and the world population begins trying to evacuate to the warmer climates of the south. Jack makes a daring attempt to rescue his son and his friends who are stuck in New York and who have managed to survive not only a massive wave but also freezing cold temperatures that could possibly kill them.

The Day After Tomorrow

Jack Hall (Dennis Quaid) is a paleoclimatologist who is on an expedition in Antarctica with two colleagues, Frank (Jay O. Sanders) and Jason (Dash Mihok), drilling for ice core samples on the Larsen Ice Shelf for the NOAA when the ice shelf breaks off from the rest of the continent, and Jack almost falls to his death. Jack presents his findings on global warming at a United Nations conference in New Delhi. Jack found that 10,000 years ago, a global warming changed the earth's climate into the Ice Age. Jack says that it could happen again in maybe 100 to 1,000 years from now if we don't stop polluting the atmosphere. Most of the diplomats, including the Vice President of the United States (Kenneth Welsh), are unconvinced by Jack's theory. At the conference, Jack meets Professor Terry Rapson (Ian Holm) of the Hedland Climate Research Centre in Scotland, who is keeping track of the world's ocean currents. Terry tells Jack that the melting of the polar ice caps has poured fresh water into the oceans and diluted the salt level, which has caused the temperature of the ocean currents to drop 13 degrees.

Two buoys in the North Atlantic simultaneously show a massive drop in the ocean temperature, and Rapson concludes that melting of the polar ice has begun disrupting the North Atlantic current. He calls Jack, whose paleoclimatological weather model holds reconstructional data of the climate change that caused the first Ice Age, to predict what will happen. Jack believed that the events would not happen for a hundred or a thousand years, but he, Frank, Jason, and NASA's meteorologist Janet Tokada (Tamlyn Tomita) build a forecast model with his, Rapson's, and Tokada's data.

All over Earth, the climate system changes for the worst. Tokyo is hit by softball size hail; it begins to snow in New Delhi; and Los Angeles is destroyed by a group of huge F5 tornadoes that hit all at the same time.The U.S. President (Perry King), authorizes the FAA to suspend air traffic over the United States due to severe turbulence. As three RAF helicopters fly to evacuate the British Royal Family from their castle in Scotland, they enter the eye of a very massive hurricane-like superstorm blizzard, that causes a temperature drop of -150 F that freezes their fuel lines and rotors, causing them to crash down and quickly freeze to death.

Meanwhile, Jack's son, Sam, (Jake Gyllenhaal) is in New York City for an academic competition with his friends Brian and Laura (Arjay Smith and Emmy Rossum), where they also befriend a student named J.D. During the competition, the weather becomes massively violent with intense winds and flooding rains. Sam calls his father, making a promise to be on the next train home. Unfortunately, the storm worsens, forcing subways and Grand Central Station to close.

As the storm worsens in Manhattan, a storm surge almost 40 feet (about half the height of the Statue of Liberty) impacts the island, causing major flooding. Sam and his friends are able to seek refuge in the New York Public Library.

Survivors in the Northern United States are forced to flee south, with some Americans illegally crossing the border into Mexico. After advising the Executive Office of the President of the United States to evacuate half the country, Jack sets off for Manhattan to find his son, accompanied by Frank and Jason. Their truck crashes into a snow-covered tractor-trailer just past Philadelphia, so the group continues on snowshoes. During the journey, Frank falls through the glass roof of a snowbound shopping mall. As Jason and Jack try to pull Frank up, the glass under them continues to crack; Frank sacrifices himself by cutting the rope and he dies.

The U.S. President's helicopter is caught in the superstorm, killing everyone on board, leaving the U.S. Vice President in charge.

Inside the library, Sam advises everyone of his father's instruction to stay indoors. Few listen, and the small group that remains burns books to keep warm and breaks the library's vending machine for food. Laura is afflicted with blood poisoning, so Sam, Brian, and J.D. must search for penicillin in a Russian cargo ship that drifted inland, and are attacked by escaped wolves from the New York Zoo. Just then, the eye of the North American superstorm begins to pass over the city with its -150 F instant freeze temperatures, and the entire New York City skyline begins to freeze solid, buildings and air alike. The three return to the library with medicine, food, and supplies, making it to safety.

During the deep freeze, Jack and Jason take shelter in an abandoned Wendy's restaurant, then resume their journey after the storm dissipates, finally arriving in New York City. They find the library buried in snow, but find Sam's group alive and are rescued by U.S. Army soldiers flying UH-60 Blackhawk helicopters.

In Mexico, the new President orders search and rescue teams to look for other survivors, having been given hope by the survival of Sam's group. The movie concludes with two astronauts looking down at Earth from the International Space Station, showing most of the northern hemisphere covered in ice, including all of the United States north of the southern states, and a major reduction in pollution.