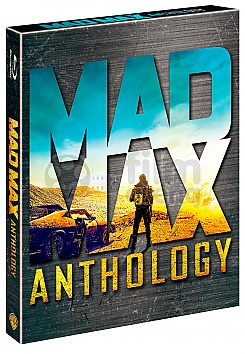 A vision of an apocalyptic future set in the wastelands of Australia. Total social decay is just around the corner in this spectacular cheap budget gang orientated road movie, where the cops do their best to lay down the law and the outlaw gangs try their hardest to defy the system.

Leather clad Max Rockatansky husband, father and cop turns judge, juror and executioner after his best friend, wife and baby are killed. Here we see the final days of normality of a man who had everything to live for, and his slip into the abyss of madness. Mad Max is the antihero on the road to vengeance and oblivion.

A former Australian policeman now living in the post-apocalyptic Australian outback as a warrior agrees to help a community of survivors living in a gasoline refinery to defend them and their gasoline supplies from evil barbarian warriors.

Bartertown is a city on the edge of a desert that has managed to retain some technology if no civilization. Max has his supplies stolen and must seek shelter there in a post apocalyptic world where all machines have begun to break down and barbarians hold what is left. He becomes involved in a power struggle in this third Mad Max film where he must first survive the town, survive the desert and then rescue the innocent children he has discovered.

An apocalyptic story set in the furthest reaches of our planet, in a stark desert landscape where humanity is broken, and almost everyone is crazed fighting for the necessities of life. Within this world exist two rebels on the run who just might be able to restore order. There's Max, a man of action and a man of few words, who seeks peace of mind following the loss of his wife and child in the aftermath of the chaos. And Furiosa, a woman of action and a woman who believes her path to survival may be achieved if she can make it across the desert back to her childhood homeland.

The film is set in the near future of a bleak, dystopian and impoverished Australia that is facing a breakdown of civil order primarily due to widespread oil shortages. (This is not explained in this film but in the sequel, Mad Max 2: The Road Warrior.) Central to the plot is a poorly-funded national police unit called the Main Force Patrol (MFP, derogatorily called "The Bronze" by their enemies), which struggles to protect the Outback's few remaining townspeople from violent motorcycle gangs. The MFP's "top pursuit man" is a young police officer, Max Rockatansky (Mel Gibson), badge number MFP4073.

Nightrider's gang, which is led by Toecutter (Hugh Keays-Byrne), plans to avenge Nightrider's death by killing MFP officers. Meanwhile, they vandalize property, steal fuel, and terrorize the citizenry. While chewing up a town where the the Nightrider's remains arrived by train, the gang brutalizes a civilian couple that tried escaping to the road; the couple is overtaken, then both of them are raped and the car is wrecked. Max and his close friend and fellow officer, Jim Goose (Steve Bisley), are informed about the incident and go to the crime scene. They find Toecutter's young proteg, Johnny the Boy (Tim Burns), and the girl of the couple in the middle of the wreckage. Johnny's drug-fueled rantings reveal him as a member of Nightrider's gang; Goose looks on Johnny with particular disdain, as his leg was broken during the Nightrider pursuit. However, they do not kill Johnny, but arrest him and drag him away in chains.

Johnny is held at the MFP's dilapidated Halls of Justice pending a visit from the Court. However, when the attorneys arrive, Johnny is ordered released: the judge has set Johnny free because no witnesses showed up for the trial. (Without the testimony of witnesses, no charges could be filed; the courts declared "no contest" for the case.) A shocked Goose attacks Johnny and must be physically restrained; both Goose and Johnny shout threats of revenge at each other. The second-in-command of the biker group, Bubba Zanetti (Geoff Parry) arrives at the courthouse to pick up Johnny, on orders from the Toecutter. Bubba does so begrudgingly, because he hates Johnny for his rowdiness and lack of style, and hates the Toecutter's favoritism towards Johnny.

Shortly thereafter, Johnny the Boy sabotages Goose's MFP motorcycle while Goose is attending a show at the Sugartown Cabaret. His rear wheel locks up at high speed the next day, throwing Goose from the bike; Goose, however, survives without even suffering "road rash". Goose borrows a ute to haul his bike back to civilization. Unfortunately, Johnny throws a brake drum through the ute's windshield, causing Goose to roll the vehicle over, Gas leaks from the fuel tank, soaking the ground around the truck; Johnny, at the belligerent urging of the Toecutter himself, then burns Goose alive in the wreckage. Goose survives, but after seeing his charred body in the hospital's burn ward, Max becomes angry and disillusioned with the police force and resigns from the MFP with no intention of returning. He takes a road trip with his wife and infant son in the relatively peaceful coastal area north of their home.

While on holiday, Max's wife, Jessie, (played by Joanne Samuel) runs into Toecutter's gang, who harass her. She escapes, but the gang manages to track her to the home where she and Max are staying. While attempting to escape from the gang again, Jessie and her son are run down by the gang, who leave their crushed bodies in the middle of the road. Max arrives too late to intervene. His son is pronounced dead on the scene, while his wife suffers massive injuries. (It is revealed in Mad Max 2: The Road Warrior that she later died from her injuries.)

Filled with obsessive rage, Max once again dons his police outfit, straps on his sawn-off shotgun, and steals a supercharged black Pursuit Special to pursue the gang. He methodically hunts down and kills the gang members: several gang members are forced off a bridge at high speed while others spill their bikes; Max shoots Bubba off his cycle with his shotgun (Bubba shoots Max in the leg with a pistol first, though, giving Max a limp that is consistent throughout the series, then runs over his exposed arm). Max struggles back into his car and pursues the Toecutter into a forbidden area. Max forces the gang's leader into the path of a speeding tractor trailer and he crushed in a head-on collision.

Max later finds Johnny the Boy taking the boots off a dead driver at the scene of a crash. Johnny desperately tries to convince Max that the man was dead when he found him and that his drug addiction has made him mentally unbalanced. Max doesn't listen and handcuffs Johnny's ankle to the wrecked, overturned vehicle with a ruptured petrol tank. Max lights a crude time-delay fuse and gives Johnny a hacksaw, leaving him the choice of sawing through either the handcuffs (which will take 10 minutes) or his ankle (which will take 5 minutes), and then drives off into the desolate outback, ignoring Johnny's frantic ramblings. The camera shows Max's car from the front, with a large and fiery explosion in the distance behind it, leaving Johnny's fate unknown. Max blankly continues to drive in a rainstorm into the Outback, a shell of his former self.