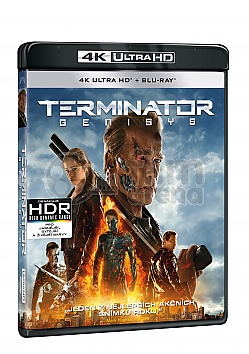 When John Connor (Jason Clarke), leader of the human resistance, sends Sgt. Kyle Reese (Jai Courtney) back to 1984 to protect Sarah Connor (Emilia Clarke) and safeguard the future, an unexpected turn of events creates a fractured time-line. Now, Sgt. Reese finds himself in a new and unfamiliar version of the past, where he is faced with unlikely allies, including the Guardian (Arnold Schwarzenegger), dangerous new enemies, and an unexpected new mission: To reset the future...

In the year 2029, John Connor (Jason Clarke), leader of the human Resistance against Skynet launches a massive final offensive on Los Angeles. He is notified by his unit, Tech-Com, that Skynet will attack on two fronts in the past and future, thereby changing warfare forever. Connor sets up two attack forces, one to strike at Skynet's main defense grid in Colorado, and a second one, led by John and his trusted lieutenant Kyle Reese (Jai Courtney), to destroy Skynet's main weapon, a time machine hidden at a remote storage facility.

Before the Resistance can reach the time machine, Skynet sends a T-800 terminator back in time to 1984 to kill John's mother, Sarah Connor. Reese volunteers to go back in time in order to protect her and ensure John's existence. Moments before Kyle disappears, he witnesses a cyborg posing as a Resistance soldier suddenly attack John. As Reese floats in the machine's magnetic field, he receives fragments of memories belonging to an alternate 12-year-old version of himself (Bryant Prince) with a young Sarah, including a cryptic warning of events that will happen in 2017.

Both Reese and the original T-800 arrives in 1984 Los Angeles. The T-800 materializes near a garbage truck, and goes to the Griffith Park Observatory, where it confronts three punks and demands their clothes, as before in the first film. All seems to go just like it happened in the first film, that is, until a new, much more aged T-800 (Arnold Schwarzenegger) appears to confront the original. The three punks run away just as the two cyborgs engage in a one on one brawl, with the younger one gaining the upper hand. However, just as the younger T-800 is about to finish the older one off, a sniper allied with the T-800 shoots it from the observatory's roof, disabling its onboard computer.

Meanwhile, Reese materializes in a back alleyway. He steals a pair of pants from a homeless man. Moments later, a police car arrives and its officer chases Reese into the alleyway. Reese corners the officer, taking his revolver and demanding to know the date and year, just like before in the first film. Much to Kyle's astonishment, the cop reveals that he knows Reese was to arrive at that precise time. Reese fires several shots at the officer, revealing that it is a T-1000 terminator. The shots stall the T-1000 long enough for Reese to escape into a nearby department store, where he grabs some new clothing. While fleeing, he inadvertently runs into two officers, Garber and O'Brien, who subdue and handcuff him.

Garber and O'Brien lead Kyle away in handcuffs, failing to see the T-1000 emerge from a dressing mirror. It impales Officer Garber through the back. Kyle and O'Brien manage to take cover behind another counter. Just when it seems like their luck is about to run out, an armored van driven by Sarah Connor (Emilia Clarke) bursts through the storefront, and knocks the T-1000 out of the way. She then empties a Desert Eagle pistol into it, stalling it long enough for Reese to get into the truck with her ("Come with me if you want to live!!"), and then drives off.

As they drive, Kyle finds out that the original timeline has been altered: Sarah already knows about Skynet, Judgment Day, and his role as her protector.Furthermore, Kyle learns that the T-800 sent from 2029 was already dispatched by Sarah and the new Terminator, who is now known as "The Guardian" (or as Sarah sometimes calls him, "Pops"). As Kyle is taking in the new revelations, the T-1000 attacks the vehicle. The Guardian and Sarah plan to lure the T-1000 into a trap from an abandoned factory. From there, the T-1000 disables the Guardian and re-activates the fallen T-800. The T-1000 then pursues Sarah while Kyle fends off the T-800. After destroying its flesh, Kyle finally destroys the T-800 by blasting its head off. Moments later, Sarah finds herself in a chamber beneath an acid bath set up as a trap for the T-1000, when she's approached by two Kyles. Unsure which Kyle is the actual Kyle and which one is the T-1000, she takes a lucky guess and shoots one of them in the foot. By sheer luck, it's the T-1000, which morphs back into its cop form. After yelling to the real Kyle to run, Sarah fires at the ceiling, unleashing an acid bath on the T-1000. The terminator is mostly melted, although it takes some assistance from the Guardian to do so (and not without damaging the flesh on the Guardian's right arm).

Sarah then explains to Kyle that the Guardian was sent to protect her from the T-1000 back in 1973, where the Terminator's arrival had caused a fractured timeline that differs from Kyle's. After saving Sarah, the Guardian began training her to face her destiny. The Guardian has built a time machine similar to Skynet's and Sarah plans to use it with Kyle to travel to 1997 to change the events that would lead to Skynet's initial attack on humanity. However, Kyle, convinced that the future has changed because of his new memories, persuades Sarah and the Guardian that they should travel to 2017 instead. He believes that Skynet will begin its attack on that year of the altered timeline; Kyle and Sarah time-travel while their Guardian spends the next 33 years preparing for their arrival.

In 2017, Kyle and Sarah materialize in the middle of a busy highway and are apprehended by police. The Guardian watches from a distance and follows them to a hospital. While being treated for injuries, Sarah and Kyle learn about "Genisys", a soon-to-be-unveiled operating system that will be used on every computer system worldwide: they realize that it is Skynet's precursor. She and Kyle are then rescued by what appears to be John Connor. As he leads the pair to a parking garage, the Guardian appears and shoots John, revealing "John" to be a nanomachine hybrid. John has been converted into a T-3000, and explains that shortly after Kyle was sent back, he was infected by a T-5000, and was subsequently transformed. His mission here is to ensure that Cyberdyne would receive Skynet's technology and secure its rise. The T-3000 John tries to convince Sarah and Kyle to join the machines and end the conflict, but they refuse. After a brief battle, the T-3000 is temporarily incapacitated with an MRI machine.

The Guardian takes Kyle and Sarah to a safe house in southern Marin County, where they make final preparations to destroy the Cyberdyne's Genisys mainframe before it comes online. The T-3000 pursues them to the Golden Gate Bridge, where Kyle, Sarah, and the Guardian are all taken into police custody. While awaiting interrogation, the trio is freed by O'Brien, (J. K. Simmons), who discovers that Kyle and Sarah are time-travelers, and the officer that Kyle and Sarah saved from the T-800's attack back in 1984. The three hijack a helicopter on the rooftop and head toward the Cyberdyne's San Francisco headquarters, with the T-3000 in close pursuit. During the airborne chase, the Guardian dive bombs into the T-3000's helicopter, causing it to crash.

Emerging from the helicopter crash, the T-3000 enters the Cyberdyne complex and advances the countdown mechanism from 13 hours to 15 minutes. As Genisys begins to gain sentience, the Guardian, Kyle and Sarah plant bombs at key points in the facility while holding off the T-3000. After a lengthy battle, the T-3000 reveals its true self before easily defeating the Guardian, only to be attacked by Sarah and Kyle. With not much time left, Sarah and Kyle escape while the Guardian traps the T-3000 in the magnetic field of the prototype time machine, where T-3000 manages to throw the Guardian into a vat of mimetic polyalloy liquid just beneath the magnetic field. Kyle and Sarah manage to reach a bunker beneath the facility moments before the time machine explodes, setting off the bombs, and preventing Genisys from coming online. The explosion also kills off the T-3000, destroying it once and for all. The Guardian, now upgraded with mimetic polyalloy components that the T-1000 usually has, appears and helps them find a way out of the debris.

Later, the trio travel to young Kyle Reese's home, where they repeat the warning about Genisys to young Kyle, ensuring the events leading to their arrival. Sarah is relieved believing that she is now free to choose what to do with her future. She decides to stay with Kyle.

In a post-credits scene, it is revealed that the Genisys system core was located in a hidden subterranean chamber and has survived the explosion.