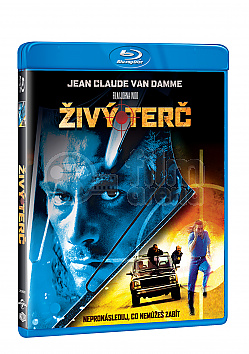 Natasha Binder comes to New Orleans looking for her father, who has gone missing. In doing so, she meets a very hard man called Chance. He helps her find out that her father was killed by an organisation who sell the opportunity to hunt human prey. They are taking advantage of a police strike in New Orleans. Will the Muscles from Brussels win through?

The film opens with a man being chased by a gang of armed men near New Orleans. One armed man in particular, carrying a hi-tech crossbow, seems intent on killing the man himself. The man being chased reaches the river and runs across a wooden boat dock but is shot twice by the man with the crossbow. One of the bolts hits him in the chest, piercing his military dog tags and he falls between the slats and into the water. His body is pulled from the river and one of the gang chasing him, Pik Van Cleaf, cuts a money belt from around his waist. The gang's leader, Emile Fouchon, asks the man hunting the victim if the experience lived up to his expectations and the man says it has.

A young woman, Natascha "Nat" Binder, arrives in town from Detroit, looking for her father, the man who was killed by the hunters. She searches for him at local missions and soup kitchens; her father was an unemployed manual laborer who was also a US Army veteran. Binder is unable to find out anything and goes to the French Quarter. At a seedy diner, she pays for her breakfast and is careless about concealing the money she has in her wallet, which is seen by several rough-looking goons. When she goes outside to her car, they attack her with the intention of robbing and raping her on the street. A man named Chance Boudreaux, who was also in the diner, beats them all severely, demonstrating high skill in hand-to-hand combat and martial arts. He tells Binder that she needs to be more careful in New Orleans. Binder asks him to be her escort while she searches for her father. Chance turns her down, saying he's a stevedore and will have to leave on a ship soon.

On the New Orleans docks, Chance is being told he can't work unless he pays his back union dues. Natascha arrives, looking for him and tells him she'll pay him to help her find her father. Chance accepts.

Chance suggests they talk to the police, however Binder is reluctant since she already reported her father's disappearance and the police seemed unwilling to do very much. Chance and Binder talk to a homicide detective, Marie Mitchell, who only has scattered evidence to work with, however, Nat's father's remains have been discovered in a burnt out warehouse. Because he was homeless, it is assumed that he'd been squatting and was the victim of an unfortunate accident when the place burned down. Chance goes there and finds one of her father's dog tags; curiously, there is a hole in it which could only have been made by a sharp weapon. Chance takes them back to Mitchell and Nat and tells them that Binder's death was not accidental and he was definitely shot by a sharp, edged weapon.

One of the men who knew Nat's father as a veteran and from the homeless missions, Elijah Roper, reveals that Binder had been passing out fliers for a sleazy local brothel owner, Randal Poe. Poe had also been working secretly with Fouchon and Pik, recruiting destitute men for their business: the two give rich men the chance to hunt human beings in various locations around the world for a price tag of $500,000. New Orleans has been their most recent base. Because the police have found Binder's body and are investigating his death as homicide, Emile and Pik go to Poe's office and torture him in order to find out how much Poe told the police. Pik uses a pair of scissors to cut off one of Poe's earlobes and threatens to kill him if he's forced to come back. Chance later drops in on Poe while he's getting a massage and works him over for information about Nat's father. Chance finds out that the city coroner, Morton, is covering up the murders committed by Fouchon and his men.

Fouchon and Pik drop in on Binder at his home, where he's burning medical records. He'd previously informed Fouchon that Mitchell had ordered Binder's body to be re-examined. The doctor looks through the spyhole in his front door and is immediately shot by Pik. Fouchon tells Pik that, due to the increased police investigation, they'll conduct one last hunt in New Orleans and leave for Eastern Europe where they can work for years under a lower profile.

Poe, having employed Roper for some time, asks him if he wants to work for a $10,000 salary. Roper accepts. Meanwhile, Fouchon and Pik meet with another client, demanding payment for the game up front and arranging for a human quarry. Roper meets with Fouchon and Pik at an abandoned train yard, is given the $10,000 in cash in a money belt and is given a head start, just like Nat's father was. He is hunted through a cemetery, bullied in every direction by Fouchon, his crew and the client. Roper is able to hide briefly and attacks his would-be killer, seizing the man's automatic rifle and shooting him. He shoots briefly at Fouchon's crew and runs when the rifle is empty. Fouchon approaches his client, and kills him, knowing he already has the man's fee in the bank. His goons continue the chase, finally cornering Roper on a busy street in the city. Roper tries to get someone to help him but most people avoid him because he's homeless. Roper is finally gunned down by Fouchon's crew. Pik retrieves the belt containing the money.

Chance and Nat meet again with Det. Mitchell. They are informed of Roper's disappearance and go to the French Quarter to talk to Poe. Poe, while packing to leave town, is met by Pik who kills him with a shotgun. While on the street, they are attacked by Pik and several of Fouchon's thugs. Mitchell is hit and killed by gunfire. Chance commandeers a motorcycle from one of the thugs he incapacitates and he and Nat take off, Pik in pursuit. They make it to a highway overpass where Chance unloads Nat. He races back towards one of the pursuing SUVs, jumping off the bike, over the roof of the truck and landing safely behind it. He opens fire with a pistol, igniting the gas tank and the truck explodes. Still being chased by Fouchon's crew, Chance and Nat leap over the side of the overpass and land in a cargo car of a moving train. Fouchon tells Pik they'll hunt Chance through the bayou and that he should get more men to join them.

Chance and Nat make their way through the bayou. At one point, Chance catches a rattlesnake that was going to bite Nat. He bites the rattles off the snake's tail and plants it in a tree, creating a booby trap. Not long after, one of Fouchon's henchmen triggers the trap and the snake bites him on the face. Fouchon and Pik realize that Boudreaux will be a formidable quarry.

Chance and Nat evade Fouchon's crew and retreat to Chance's Uncle Douvee's farm in the bayou. Chance gets the shotgun he'd been keeping at Douvee's and tells his uncle about his plan to lead them to the Mardi Gras Graveyard, an abandoned factory where the floats used in the Mardi Gras parade in New Orleans are stored. Chance rides out on horseback while Nat stays with Douvee. When Fouchon and his men arrive at Douvee's, they trigger another booby trap that blows up Douvee's cabin and kills several of them. Douvee sends Nat to contact the sheriff, while he rides after Chance.

Chance leads Pik to the Mardi Gras Graveyard. Chance uses the factory to hide and attack Fouchon's men. In the large warehouse used to store the floats, Chance takes out several more of Fouchon's men. Chance and Pik find themselves in a standoff that Chance wins when he shoots Pik dead. Nat and Douvee catch up and help Chance take out several more of Fouchon's party. Douvee is wounded, non-fatally, and Fouchon finds Nat and holds her hostage, forcing Chance to drop his shotgun. The two fight hand-to-hand for several minutes until Chance, using a grenade, beats Fouchon down. He drops the grenade in Fouchon's pants and headbutts him back. Fouchon fumbles for the grenade, even managing to remove the fuse, however it goes off before he can render it useless and he's killed. Chance reunites with Nat and Douvee and the three leave.