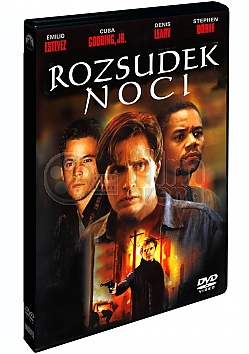 Four pals are on their way to a boxing match, but gets stuck in heavy traffic. To get to the boxing match in time they take the first exit they find to find another way to the venue. As they are driving around lost in gang-land they get stuck and witness a brutal murder. The killer wants no witnesses and tries to kill them too. The four pals get away the first time, but the killer is soon back on their tail again while they are trying to find help in the middle of nowhere.

Frank Wyatt (Emilio Estevez) leaves his wife and baby daughter at home for a night out with his friends to see a professional boxing match in modern Chicago. Frank is joined by Mike Peterson (Cuba Gooding Jr.) and Ray Cochran (Jeremy Piven) who shows up in a lavish RV Ray is "testing out" for his business. When another friend of the guys cancels Frank invites his brother John (Stephen Dorff), and they all head to the city for the boxing match.

Stuck in a traffic jam en-route, John gets into a fight with another driver. Frustrated by the delay, Ray decides to save time by getting off the crowded expressway and search for a shortcut through a poor, residential neighborhood. The four friends are alarmed when they run over something. John, Mike and Frank get out to investigate, and find a man named Teddy (Michael DeLorenzo) lying in the street hurt, and they take him back into the RV. Ray gathers up all the liquor and empty liquor bottles and tosses them to erase any evidence that the guys had been drinking. Upon examining Teddy for injuries they found that he had been shot, and with a paperbag of money in his possession. Mike hears a police car, which the group sees drive through the intersection ahead a few seconds later. Frank jumps into the driver's seat and begins pursuing the squad car.

Unable to catch up to the police, their vehicle is suddenly struck by a car. The impact forces them into a narrow alleyway, leaving the RV damaged, stuck between two brick walls, and unable to start. Moments after the crash three unknown men drag Teddy out of the RV through the back window. The psychotic and ruthless leader of the gang, Fallon (Denis Leary), arrives in the vehicle that struck them. Still inside the RV the four friends overhear the group talking about their suspicions that Teddy had stolen money from Fallon. Fallon shoots and kills Teddy and reminds the rest of the gang that they have a policy to leave no witnesses. As the group of criminals approaches the RV, Mike breaks the windshield as Frank sets the RV on fire, and all four escape through the front window and run.

The film continues with the four friends hiding and trying to outrun the gang until they think they've gotten away. They head to a railyard and hide aboard an empty train. Fallon and his gang search the yard and trains for the guys. While hiding inside the car of a old train Frank and his friends are frightened by some sleazy homeless people who were aboard the train already. The homeless ringleader blackmails them to alert Fallon's gang to their location unless they pay them for their silence. Ray gives up his watch, Frank gives up his wallet, while John gives up his pocket change and Mike gives up his gold chain necklace. A mentally retarded member of the other homeless men aboard the train, Buck, shows interest in Mike's (Purdue) jacket by stating and repeating that he is a college graduate. When Mike refuses to give up his jacket the homeless man becomes angry and gets loud. Fallon and his gang were leaving the railyard when they heard the shouting coming from the railcar. As they open the car everyone aboard jumps off and starts running. Fallon shoots a guy wearing the (Purdue) jacket and it turned out to be Buck, the homeless guy who was wearing Mike's jacket. The homeless guy is in possession of Frank's wallet when he is killed by Fallon. Fallon recovers the wallet and now knows who Frank is, his family, and where he lives. Frank and the guys continue to outrun Fallon and his gang until they eventually find an apartment building. With an open door Frank and the guys all run inside. They hole up in the apartment of two overprotective women, mothers Clarissa and Rita, and call the police minutes before the criminals catch up with them. Determined to get Frank and his friends, Fallon and his gang terrorize the building's tenants. Hearing them terrorize the tenants the enraged women demand that Frank and his friends leave. One of the women, Rita, suggests that they head to the roof of the building to escape Fallon. They flee to the rooftop and Mike, John, and Frank manage to cross over to the neighboring building's roof with the use a ladder. Because of Ray's fear of heights, he decides to knock the ladder off and stay behind and try to negotiate with Fallon, convinced that Fallon will spare their lives. However, Fallon pushes Ray off the roof and Ray falls to his death.

Escaping into the sewers, Mike suggests that they fight back against their pursuers and Frank and John agree. Sykes, Fallon's righthand man and best friend, catches up with them, and after a brief confrontation has his gun wrestled away and he is shot and killed by Mike. Frank chooses not to risk their lives anymore, so they escape the sewer and decide to keep running. Within the sewer, the remaining members of Fallon's gang find the body of Sykes. A comment made by one of the gang members annoys Fallon and he drowns him.

While hiding once more in an abandonded building, the three remaining friends see a bus and try to flag the driver down. The driver sees them but, thinking they're other gang members, decides to drive off leaving them behind. Searching for help, Mike breaks the window of a closed grocery store, in the hopes it will trigger the alarm and bring the police. Shortly afterwards, they realize that Fallon has found them once more. The last remaining member of Fallon's gang is shot dead by Mike, but in the process Mike is shot in the stomach. John goes to help Mike and Fallon shoots him in the leg. Frank leads the wounded Mike and John to a bathroom where they hide. Frank gets to the security office and activates the silent alarm. Knowing that the three can run no longer, Frank draws out Fallon, leading him away from the wounded Mike and John. After a struggle between the two, Frank pushes Fallon off the stairs, killing him. The movie ends with the police investigating the crime scene and Frank's wallet is recovered by the police. It is suggested that Mike and John's wounds might not be fatal as they are wheeled away by the medics.