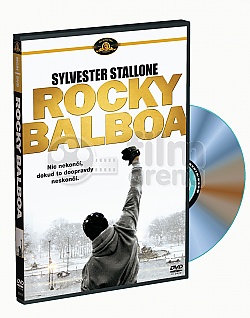 When he loses a highly publicized virtual boxing match to ex-champ Rocky Balboa, reigning heavyweight titleholder Mason Dixon retaliates by challenging the Itallian Stallion to a nationally televised, 10-round exhibition bout. To the surprise of his son and friends, Rocky agrees to come out of retirement and face an opponent who's faster, stronger and thirty years his junior. With the odds stacked firmly against him, Rocky takes on Dixon in what will become the greatest fight in boxing history, a hard-hitting, action-packed battle of the ages.

In the past 15 years (1990-2005) since the end of the last Rocky movie, Rocky Balboa (Sylvester Stalone) is a retired boxer who owns an Italian themed restaurant in Philadelphia named after his beloved wife Adrian (flashbacks to the original portrayal by Talia Shire), who passed away from ovarian cancer in 2002. He visits her gravesite regularly, and takes a tour of notable landmarks in Philadelphia that remind him of their time together. Their only son, Robert (Milo Ventimiglia), has entered the corporate world and works at a firm in downtown Philadelphia. The relationship between father and son is strained; Robert feels resentment about living in the shadow of his famous father.

Rocky still sees his brother-in-law Paulie (Burt Young) on a regular basis. He begrudgingly joins Rocky on the tour of his life with Adrian, but it pains him to do so because he knows he did not treat his sister very well. Rocky reminds him that Adrian loved him too. At the end of his yearly tour, he stops at the Lucky Seven tavern, which he would pass by on his way to Mickey's gym during his boxing career. The bartender is Marie, a grown woman Rocky hadn't seen in decades. Back in 1975 during the first Rocky movie, she was a young teenager who Rocky admonished her to quit smoking and clean up her act. Now, she is a down-on-her-luck bartender and single mother of a (presumably) teenage child named Stephenson (or "Steps", his nickname). Partly out of a desire to help her, as he did before, and partly out of the need for a friend and confidant, Rocky befriends Marie and tries to provide a role model for Steps. When his assistant at the restaurant goes on maternity leave, he invites Marie to work there as the hostess and barmaid.

The sense of stagnation that has gripped Rocky since Adrian's death begins to lift when ESPN televises a computer simulation of a fight on a television program hosted by Brian Kenny. The virtual fight pits Rocky (in his prime) against the current Heavyweight champion, Mason "The Line" Dixon (Antonio Tarver). The simulation causes a change of heart in Rocky; though he has not fought professionally in years, he begins to believe he still has "some stuff in the basement," and "and that he has a beast inside that needs to be released he" decides to start fighting again, but only on a small scale.

Rocky goes to Robert and Paulie to ask them to be in his corner and to help him train. Robert feels that the whole notion is crazy and that the feelings his father is having will soon pass. Paulie also thinks the idea is crazy and tells Rocky the reason for these feelings is because "Adrian left him." Rocky sharply corrects Paulie by saying "She didn't leave me, she died." In an emotional scene, Rocky breaks down and admits that he has found life without Adrian unbearable and much harder than he thought it would be. As a result of that, a "beast" has grown inside him and it is tearing him apart. Rocky needs an outlet to vent his anger and pain. Paulie wishes to help Rocky but all he has time for is his work at the meat plant and cannot afford to help.

Rocky applies for his license to fight and although he passes all of his medical tests he is still refused a license beacuse of his age. After an impassioned speech to the Pennsylvania Athletic Commission, in which he accuses them of acting in bad faith by knowing full well that they will deny him a licence even if he passes, he is allowed back into the ring.

The simulation, and the news that Rocky has gotten his license, gets gears turning in Mason Dixon's camp. Dixon is viewed as soft because he hasn't had any "true" competition - all of his opponents have provided him little challenge, and generated scant interest from the public. Dixon's promoters inform him that HBO won't televise any more of his fights because they don't make any money; most of the available challengers have little marquee value. They convince him to participate in an exhibition bout against Rocky, to take advantage of the buzz generated by the computer fight. At first, Dixon refuses: he has no desire to beat an old man. But he realizes that, if he is ever to respect himself as a fighter, he needs to test himself against a true challenger.

Dixon's representatives come to see Rocky in his restaurant and offer him the chance to face Dixon in the ring in a charity exhibition bout. At first, Rocky is unsure - this is far bigger than what he was planning to do - but Marie advises him to take this last shot. Paulie doesn't believe it is possible, but when he is fired from the meat plant, he comes back to Rocky and, in a drunken rant, pledges to help him. Robert is harder to convince: though he is his own man, he has resented living in the shadow of his father, and though he knows his father doesn't mean for it to happen, the notion of a new fight threatens to make it worse. For both their sakes, Robert begs Rocky to not fight. Rocky answers his son with one of the more inspiring lines of dialogue in the film:

"Let me tell you something you already know. The world ain't all sunshine and rainbows. It's a very mean and nasty place and I don't care how tough you are it will beat you to your knees and keep you there permanently if you let it. You, me, or nobody is gonna hit as hard as life. But it ain't about how hard ya hit. It's about how hard you can get it and keep moving forward. How much you can take and keep moving forward. That's how winning is done! Now if you know what you're worth then go out and get what you're worth. But ya gotta be willing to take the hits, and not pointing fingers saying you ain't where you wanna be because of him, or her, or anybody! Cowards do that and that ain't you! You're better than that!"

Robert understands and quits his job to join Rocky in his corner. Tony "Duke" Evers is once again his head trainer, and gears his training specifically toward his ability to generate power.Rocky's age (he is 58) precludes him from training for speed, and sparring will not help him any, drawing on Rocky's experience and ring smarts. Duke's strategy is to start "buildin' some hurtin' bombs;" in other words, try to beat Dixon with brute strength and put him away early in the fight before Rocky's stamina gives out. After a grueling training montage mirroring many elements of that seen in the first film, Rocky is ready for the ring.

The Balboa-Dixon exhibition match is broadcast over HBO Pay-per-view from the Mandalay Bay hotel and casino in Las Vegas. The two respective fighters enter the ring to their own respective themes - Rocky enters to the tune of Frank Sinatra singing "High Hopes" (Paulie's selection) while Dixon enters to an agressive number--"It's a Fight" by Three 6 Mafia. Celebrated sports announcer Michael Buffer opens the event with his usual flair, including his trademarked catchprase, "Let's get ready to rumble!" The fight itself starts slowly - Rocky is thrown off balance by Dixon's speed. He does land a few punches in the first round, but it is in the second round that Rocky starts to do some damage. After Rocky is knocked down twice by Dixon, a hook to Rocky's body breaks Dixon's left hand, and allows Rocky to charge in and throw some devastating punches.

The fight is back and forth, until the tenth (and final) round when it appears that Dixon will outlast the tired Balboa. A hook sends Balboa to a knee where he has a flashback, and within his head he returns to what he said to his son when asked not to fight again:

In this Rocky finds the strength to continue; he stands up, and Dixon is visibly stunned at the aged former champion's determination. Rocky fights back, throwing punch after punch. Balboa taunts Dixon to get him to give everything he has, knowing this is the last round of his life. The fight ends with both fighters trading blows in the center of the ring, and it is Rocky that throws the last punch of the fight, knocking Dixon to the ropes as the bell rings, singling the end of the fight. The spectators cheer wildly. Rocky tells Paulie that the "beast" that was living inside him is now gone. Rocky exits the arena as the decision is read; Dixon wins in a split decision. Rocky, who has already begun leaving the ring, turns back to the crowd, taking one more curtain call before finally leaving, as the crowd roars their approval. The final scene is a frozen screen of Rocky holding a fan's hand as he walks into the tunnel.

The movie concludes as it began, with Rocky at Adrian's grave. He leaves a flower for Adrian, saying, "Yo, Adrian, we did it", a reprise of when he said "Yo, Adrian, I did it!" when he won the title in 1976 in Rocky II. Then he turns and walks away, stopping for a moment to turn once more to the gravesite and wave, before fading from focus altogether, seeming as if he asends. The last shot of the film, and of the saga as a whole, is of the flower on the headstone.

During the end credits, there is an acknowledgement of the iconic status the Rocky series has achieved, through a montage of people following in Rocky's footsteps, charging up the front steps of the Philadelphia Museum of Art, concluding with a reprise of the famous stair sequence from the original film. The credits fade to black from a still shot of Rocky standing in silhouette at the top of the steps, facing the skyline of Philadelphia as night falls.

Copyright © 2020 filmarena.cz | Created by: tvorba webových stránek
We have 11250 products for you.