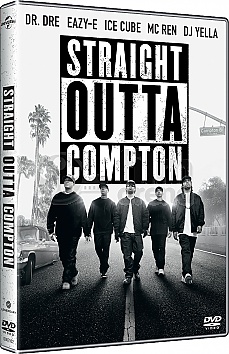 In 1987, five young men, using brutally honest rhymes and hardcore beats, put their frustration and anger about life in the most dangerous place in America into the most powerful weapon they had: their music.

Taking us back to where it all began, Straight Outta Compton tells the true story of how these cultural rebels-armed only with their lyrics, swagger, bravado and raw talent-stood up to the authorities that meant to keep them down and formed the world's most dangerous group, N.W.A. And as they spoke the truth that no one had before and exposed life in the hood, their voice ignited a social revolution that is still reverberating today.

Easy-E (Jason Mitchell) is in the middle of a drug deal that's breaking bad. Guns are pulled. Threats are made. The police appears and raids the block and E barely makes it out of the house and escapes to freedom across the rooftops.

Meanwhile, Dr. Dre (Corey Hawkins) is listening to records in his room. His mom (Lisa Renee Pitts) is mad that he missed a job interview. He says he has a job working as a D.J. at a local club. She points out that making $50 a night isn't a real job. She wants the best for him. He says he does too. He moves out. His little brother T (Keith Powers) is sad to see him go.

Elsewhere, Ice Cube (O'Shea Jackson Jr.) is writing rhymes on the school bus. Other kids on the bus horse around by flashing gang signs at a car driving next to the bus. The car cuts them off and the guys inside board the bus and pull guns. They tell the kids they better start "gang banging their books" or the Crenshaw Mafia might just get them.

Cube goes to the house where Dre is staying. He and Jinx (Cleavon McClendon) are making beats. Cube tells them what happened on the bus and lets them know that he wrote some new rhymes. As Cube goes to head back home, the LAPD stops him and violently searches him.

Later at Doo-Tos Club, Dre and DJ Yella (Neil Brown Jr.) are spinning. The club owners Lonzo (Corey Reynolds) tells them he doesn't want any "rap shit" on stage, but as soon as he steps out, Cube takes the mic and raps about his day. Lonzo hates it. But MC Ren (Aldis Hodge) and E are at the club and they like what they hear. Dre asks E to think about putting his money into the music.

There's a fight in the parking lot after and the LAPD locks up Dre. E bails him out. Outside the police station, Dre tells E that if he can sling dope, he can sling records. Together, they form Ruthless Records. They invited a group from New York called HBO to record "Boyz in the Hood", one of the raps Cube wrote, but they hate it. Its suggested that Cube just record it, but he cant because hes already in a group with Jinx. So E does it. After much coaching from Dre, hes able to hit the beat.

BoyZ in the Hood by Eazy-E and NWA becomes the #1 song for six weeks. Music manager Jerry Heller (Paul Giamati) meets with E and tells him that he wants to make him legit and together they can build something big.

E tells the group he wants them all wearing black clothing because its professional. Jerry has invited other record executives to the show to check it out. They all pass with the exception of Bryan Turner (Tate Ellington) from Priority Records. Priority currently has the California Raisins on their roster. NWA thinks that's a joke until Turner points out that the Raisins went gold. Bobby Brown bodyguard Suge Knight (R. Marcos Taylor) is also at the show. He gives them props.

The band records 'Straight Outta Compton' at a recording studio in Torrance, California. During a break in the recording, the guys go outside and are harassed by the LAPD. Jerry witnesses police brutality first hand. After the event, Cube writes "Fuck Tha Police".

Jerry has given E his contract, but no one else has gotten theirs. Jerry says thats normal. The lawyers take forever. Meanwhile, Dre and his lady are sleeping with a baby at his aunts house.

The band plays inside the packed arena. Afterwards, Dre tells his brother over the phone that he can come out and meet up with them in Florida. Two guys show up with guns to find their girl at a hotel party. NWA chase them out with guns of their own.

The FBI issues a warning about playing 'Fuck Tha Police'. Jerry recommends putting the song on hold for a little while. E sees this as free publicity.

The rest of NWA still doesn't have contracts. Cube mentions that to Dre, but Dre says he doesnt want Cube jumping to any conclusions that anything shady is going on.

Dre gets a 911 page. His mom tells him that T was killed in a fight. Dre breaks down crying, and the rest of the group consoles him. E tells him that they will always stay brothers. They go back home so Dre can go to the funeral. He tells his mom this would have never happened if he had just let his brother come on the road like he wanted. His mom says that isn't true and that shes proud of Dre.

The Detroit Police show up and tell them they cant play F--- Tha Police due to the vulgar language of the song. Cube tells the crowd whats going on and they play it anyway. The crowd goes crazy. The police make their way to the stage. Gun shots are fired and everyone flees. In the ensuing riot, NWA is arrested.

NWA holds a press conference. Cube says that their art reflects their reality. A reporter asks the band what a guy from Compton does when he starts making money like that. Everyone looks to E for an awkward moment. He answers, Buy Raider gear!

Jerry finally gives Cube a contract to sign and offers him a check for $75,000 once he signs it. Cube wants to get a lawyer to look it over because he knows something is wrong. Jerry doesn't want him to do that, so Cube walks away. He says he'd rather be broke than be fucked. Dre doesn't leave because "we gotta do what we gotta do." He has his mom, a girl and a child to think about. Suge is there when the tour ends and announces that hes decided to get into managing talent.

Ice Cube is now with his wife Kim (Alexandra Shipp). They meet with Turner who tells Cube that there isnt a lot of money in going solo, but if his first records is a hit, they'll make it up to him on the second. His first album is a hit.

Cube wants an advance for his second album, but Bryan says its complicated. So Cube smashes up his office. E is jealous of Cubes success.

The DOC (Marlon Yates Jr) is in an accident and his throat is crushed. Dre visits him at the hospital. Suge is there and points out that E and Jerry aren't. He makes another attempts at recruiting Dre and offers to have his people look at Dre's contract.

Bryan plays the newest NWA records for Cube where they call him a Benedict Armold. Cube answers it by dissing NWA and Jerry on his next album. He calls Jerry a Jew. Out of everyone, Jerry is most upset and wants to sue Cube for defamation of character and for being anti-Semitic. He tells E to take care of it.

At a New Music Expo, people from Ruthless Records get into a fight with Cubes people (Lench Mob). Meanwhile, the Rodney King beating is televised.

A mysterious man shows up at Jerry's house one night and freaks him out.

Dre tells E to get rid of Jerry, but E is loyal. Dre points out that they didnt make it because of Jerry. They made it because their shit is dope. Dre reminds E that when T died, E promised him that theyd all stay brothers. "Guess you forgot that." Dre leaves to form his own company (Death Row) with Suge. Suge beats the shit out of E to get him to release Dre and DOC from their Ruthless contracts. Death Row starts signing new up-and-coming artists like Snoop Dogg.

E tells Jerry that they have to kill Suge. Jerry says they fight with lawyers. Dre and Snoop collaborate, but all is not well. Dre is put off by Suges over the top violent nature.

On April 29, 1992, the verdict in the Rodney King case comes down. The LAPD is found not guilty and the LA Riots begin.

E sees Cube at a club and they patch things up and show respect to each others careers. Cube agrees to do an NWA reunion as long as there's no Jerry. E is starting to cough.

Es girl Tomica (Carra Patterson) looks over the contracts and tells him that Jerry took advantage of him and now hes broke.

E meets with Jerry. Jerry points out that E isn't looking too good. E fires him. Then he calls Dre and they patch things up as well too. They talk about collaborating again.

Ren and Yellow are ready to start recording a new NWA thing. They're just waiting for Cube and Dre to show when E faints and is sent to the hospital. The doctor tells him that he's HIV positive and all they can do is try to keep him comfortable for six months.

E goes public with the announcement that he's dying of AIDS.

Another few months later, Dre visits him in the hospital when he's in a coma. Cube shows up, but can't go in the room because he doesn't want to see E like that.

The film closes on a montage of the real life surviving members of NWA and their careers up to the present. Ice Cube continues to make music and is a big-name movie star. Dre has become a hugely successful business man. He makes Eminem a star and sells his Beats by Dre brand to Apple for $3 billion.

Copyright © 2020 filmarena.cz | Created by: tvorba webových stránek
We have 11226 products for you.