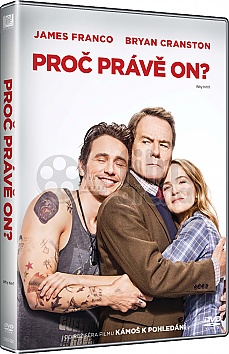 Over the holidays, Ned (Bryan Cranston), an overprotective but loving dad and his family visit his daughter at Stanford, where he meets his biggest nightmare: her well-meaning but socially awkward Silicon Valley millionaire boyfriend, Laird (James Franco). The rivalry develops,and Ned's panic level goes through the roof when he finds himself lost in this glamorous high-tech world and learns that Laird is about to pop the question.

The film starts with a Facetime chat between Laird Mayhew (James Franco) and his girlfriend Stephanie Fleming (Zoey Deutch). She invites him to come over to "Netflix and chill". Laird gets excited and starts naming Netflix shows as he points the phone's camera down toward his groin.

Stephanie's younger brother Scotty (Griffin Gluck) puts on a slideshow at an Applebee's in honor of their dad Ned's (Bryan Cranston) birthday. Ned's wife/the kids' mother Barb (Megan Mullaly) and some of Ned's coworkers are in attendance. Scotty arranges for Stephanie to pop in via webcam, just as Laird walks into her room. He takes his pants off and exposes his bare ass to everyone. Scotty frantically tries to shut the feed off, but he accidentally gets a shot of Laird's ass. Ned just grabs the laptop and smashes it when the restaurant employees come in to sing "Happy Birthday".

Ned is the CEO of a printing company that has been having a rough year. The company is in debt and is unable to close deals with other companies due to the lack of demand for printing. Ned talks to his coworker Lou Dunne (Cedric The Entertainer) about the incident from the previous night. Ned tells Lou that Stephanie wants the rest of the family to meet Laird, even though Stephanie never even mentioned having a boyfriend up until that night.

Stephanie drives her family to Laird's house, which is surprisingly huge. She explains to Ned that Laird is the CEO of a video game company, meaning he's super rich. They arrive at the house, and Laird greets the family as "the motherfucking Flemings!" They also meet Laird's right-hand man Gustav (Keegan-Michael Key), who also acts as the voice of reason to Laird. Laird gives the family a tour of his house, complete with curse words and overly complimenting Barb's looks in front of Ned. He even shows off a back tattoo that he got of the Flemings' Christmas card, with "Happy Holidays" written on the bottom. In the living room is a tank with a moose filled completely with its urine. The basement has a bowling alley that Laird built with a mural of Ned, complete with a "crotch-chop" pose of his.

Ned talks to Stephanie about Laird's behavior, which she knew he would bring up. She asks Ned to give him a chance.

During dinner, Laird starts talking about times that he and Stephanie have had sex, in full and graphic details. She later tells him that he is making her parents uncomfortable, so Laird vows to be better for her.

Laird apologizes to Ned and Barb for making them uncomfortable. He then introduces them to his Siri-like voice system called Justine (Kaley Cuoco), who is there to accommodate Laird and his guests.

Ned tries to use the bathroom, but unfortunately, Laird has declared his home a "paper-free" zone, so Ned has to clean himself with an automated toilet. Gustav tries to help Ned clean himself, but it just becomes complicated.

Laird invites Ned to go out for a walk in the woods outside his house. He brings Ned to a teepee so that he could ask Ned for his blessing to propose to Stephanie. Ned is quick to say no, which completely blindsides Laird since he was confident Ned would says yes. Laird promises to win him over so that he can get his blessing, but he also asks to keep it a secret from everyone, including Barb and Scotty.

Laird bonds with Scotty as the boy tries out Laird's new video games and gives him feedback, while also talking business with him since Ned has been grooming Scotty to take over his business. Meanwhile, Barb encounters someone with a vape pen, and she gets really high. She later tries to get Ned to come onto her, but he refuses.

Ned contacts his coworker Kevin Dingle (Zack Pearlman) to dig up some dirt on Laird. Dingle tries to hack into Laird's personal content, only for him to get hacked back by an anti-hacking program that Laird installed, causing all of Dingle's power to crash. He tells Ned to try and break into Laird's personal computer by trying to figure out his password. Dingle assumes it must be something dirty ("StephaniesBoobs" for example), but Ned is surprised when he finds the only piece of paper in the house with a password that says "StephaniesDude" (which he actually thinks is sweet). Before Ned can read too much, Laird and Stephanie both walk into his office and talk about how Laird has been acting. He apologizes and tries to get her to have sex. Instead, she lets him go down on her, which Ned is forced to listen to as he hides under Laird's desk.

The family gathers in Laird's living room for a Christmas party. Ned takes the chance to tell everyone that Laird is in debt since his company hasn't been doing so well. Laird then reveals that he bought Ned's company as a gift to remove all his debts. Instead of expressing gratitude, Ned punches Laird in the face. The two start fighting childishly (Ned bites Laird's dick), and Laird runs to the top of the moose tank. The glass beneath his feet breaks and he falls in. Scotty runs over to break Laird out, but the tank breaks completely and sends moose piss all over the place. The moose itself is on top of Scotty, and its balls are on his face. Stephanie and Barb are both pissed at the men's behavior, and the family leaves Laird's home.

Upon returning to work, Ned finds that all of his employees are celebrating Laird's purchase of the company since their jobs are now safe. They get him an iPad as a gift, which has a wallpaper of him and Laird from the bowling alley, making Ned feel guilty.

It's Christmas Day, and the Flemings are celebrating without Stephanie. They are surprised when Laird's chopper comes down to the middle of the street since he wanted to surprise Stephanie and bring her home for Christmas. She is still mad at both Ned and Laird for their behavior around her, and she goes inside the house. Ned and Laird have a talk, since Laird still wants to propose but won't do so until he officially gets Ned's blessing. Laird also reveals that he got doves and another special surprise as part of the proposal, but Ned says that Stephanie doesn't like the flashy stuff and that she loves Laird for who he is. He finally gives Laird his blessing. Ned goes inside to talk to Stephanie and get her to talk to Laird. Through a miscommunication, Ned tries to call off the surprises, but Gustav thinks it's still a go. He sets the doves free and also brings out Gene Simmons and Paul Stanley of KISS to come out and play "I Was Made For Lovin' You". Laird tells the two to go inside the Fleming house while he proposes.

Moments later, Laird and Stephanie go inside the house. Laird tells Ned that Stephanie declined the proposal because she's just not ready to get married, but she still wants to continue dating Laird.

Later during the party, Ned and Scotty approach Laird for a new business idea since they are all part of the same company now. Scotty says they should sell the same toilets Laird has in his home since they would be very profitable. Laird likes the idea and agrees. The couples then dance together as music plays, with Ned referring to Laird as "son".

Copyright © 2022 filmarena.cz | Created by: tvorba webových stránek
We have 7673 products for you.