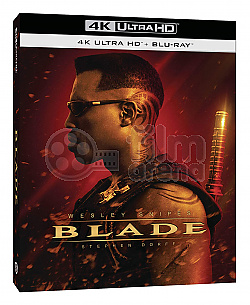 In a world where vampires walk the earth, Blade has a goal. His goal is to rid the world of all vampire evil. When Blade witnesses a vampire bite Dr. Karen Jenson, he fights away the beast and takes Jenson back to his hideout. Here, alongside Abraham Whistler, Blade attempts to help heal Jenson. The vampire Quinn who was attacked by Blade, reports back to his master Deacon Frost, who is planning a huge surprise for the human population.

The movie begins in the year 1967 with a pregnant woman being admitted to a hospital, bleeding from the neck. Paramedics think she was attacked by some type of animal. Doctors perform an emergency C-Section, and her baby (a boy) is born alive just as she dies.

Fast-forward 30 years later to a young man named Dennis (Kenny Johnson) riding in a car with an attractive redhead named Racquel (Traci Lords) heading to an underground nightclub (located, oddly, in a slaughterhouse) somwhere in Los Angeles. After addressing the doorman in Russian, Racquel brings the young man into the club. The man is confused and trying to understand the rules of the club. Some of the regulars physically push him. And just as he says, "I need a drink." The sprinkler suddenly system activates, raining blood down on everyone inside. It is then that he (and the audience) realizes that everyone in the club is a vampire.

Dennis desperately tries to get away and winds up at the feet of a menacing figure in a black-leather trenchcoat. The vampires look on this figure with awe, mumbling the words: "it's the Daywalker!" This is our first look at Blade (Wesley Sinpes), the vampire killer.

Blade pulls out a shotgun and opens fire on the vampires, who instantly burn to ashes when killed. When the gun is knocked out of his hands by Racquel, Blade uses a set of silver stakes to kill Racquel and more vampires, including the disk jockey. Soon all the vamps are either dead or have fled except for one; a heavyset vamp named Quinn (Donal Logue), whom Blade has apparently run into before. Blade pins Quinn to the wall, and then sets him on fire before confronting the last member in the club (the human man from the beginning). Finding no vampire bite marks on Dennis, Blade lets him live and makes his escape as the police arrive.

Quinn is extinguished and taken to the local hospital. A morgue technician examines his blood and shows the results to Dr. Karen Jenson (N'Bushe Wright), who finds a number of irregularities, including abnormally developed jaw muscles. As they are discussing the test results, Quinn springs back to life and bites both doctors. Before he can finish Dr. Jenson, Blade shows up and saves her, cutting off one of Quinn's arms.

Blade brings Karen to his hideout and asks for help from his mentor, an elderly man named named Whistler (Kris Kristofferson). Whistler injects Dr. Jenson with a solution of garlic essence and silver nitrate and remarks that she has a 50/50 chance at best of recovering.

Meanwhile, a group of vampires are discussing Blade's latest attack on their members. Apparently this club (and to an extent, Quinn) is the property of a vampire named Deacon Frost (Stephen Dorff). Frost wants the vampires to outright rule the humans, while the others (particularly an older vampire named Dragonetti) prefer to maintain a peaceful co-existance. Dragonetti (Udo Kier) in particular does not like Frost because Frost is not a "pure-blood" (ie: was not born a vampire, merely became one through the bite of another).

The next morning, Karen Jenson awakens and sees Whistler injecting Blade with some type of serum. She tries to run away but Whistler confronts her and tells her that he and Blade are hunting vampires. Karen of course is skeptical, but Whistler goes on to talk about what they use to hunt- explaining that vampires are severely allergic to silver & garlic while also being vulnerable to sunlight (ultraviolet rays in particular). Whistler fuels up Blade's car and gives him a new UV flashlight to use when hunting that night. Whistler also gives Karen a type of "vampire mace" (garlic & silver nitrate in a liquid form).

Blade drops Karen off at her apartment and she tries to pack up and get out of town. A police officer, identifying himself as Officer Krieger (Kevin Patrick Walls), arrives and questions her about the events at the hospital last night, as a pretext for trying to attack her. Before he can kill her, Blade returns and subdues the policeman. Blade explains that this officer is a "familiar," (also called a "Reinfield" or a "bug-eater") a human slave owned by a vampire. Blade reveals a tattoo called a "glyph" on the back of the officer's neck and recognizes it as the mark of Deacon Frost. Blade lets Officer Krieger go free in the hopes of tracking him to another vampire club.

Sure enough, Blade and Karen arrive at a new underground club and have a confrontation with Pearl (Eric Edwards), a morbidly-obese vampire who works as a record keeper. Pearl confesses that Deacon Frost is researching ancient vampire prophecies... one in particular involving a ritual and a creature named "La Magra." Karen burns Pearl severely with Whistler's giant UV light and Blade steals part of Pearl's hard drive.

Blade and Karen move further into the vampire records and find pages from "The Book of Erebus," the vampire Bible. They are suddenly ambushed by a group of vampires led by Quinn, now healed and having regrown his lost hand. Quinn attempts to torture Blade for information (and for his own amusement) but realizes that Blade has a radio link in his ear.

Whistler suddenly arrives (having been listening in the whole time) and opens fire on the vampires. The three heroes escape through the subway system, and Blade cuts off Quinn's other hand to get away. When he and Karen board a passing subway car, Blade steps back and injects himself with more serum. Karen suspects that Blade is actually a vampire himself, but Blade responds in the negative; he is something completely different.

At a vampire club, Officer Krieger arrives where he reports to Frost about Blade and of his new alliance with the doctor, Karen. Frost is angry for letting Blade get away, but does not kill Krieger. Frost lets his blond vamp girlfriend Mercury (Arly Jover) do it for him who bites out Krieger's throat in gory fashion.

Back at the hideout, Whistler explains Blade's history to Karen: Blade was the baby seen in the opening scene; his mother was attacked by a vampire hours before he was born. She died but Blade lived. Due to the unique circumstances of his birth, Blade is a hybrid of human and vampire abilities; he can resist garlic & silver, can walk in open sunlight (hence the nickname "Daywalker" given by other vampires) and has enhanced strength and healing abilities. But Blade has also inherited the vampire's thirst for blood. Whistler developed a serum to curb Blade's cravings, but Blade's body is starting to resist it. Whistler also gives Karen a bit of his own history: his own children and wife were killed by a vampire years before and he acts out of revenge, as much as social justice.

Whistler also learns that his attempted cure of Karen was ineffective and that she is growing close to turning into a vampire. Karen refuses to give up, taking a few items from the hospital where she worked to try and find a cure for both her and Blade. The first item she brings (an anti-coagulant formula known as EDTA) is found to have a violent reaction when mixed with vampire blood, so she gives it to Blade for use as a weapon.

Meanwhile, Quinn is at Frosts' headquarters, berated for his second failure. Frost encourages Quinn to go back out and get Blade... alive. Quinn is confused by this as the vampires have been trying to kill Blade for a very long time.

Afterwords, Frost takes Mercury and his entourage of followers and abducts Dragonetti, forcibly ripping out the elder vampire's fangs. Frost's gang shields themselves with sunscreen, black clothing and motorcycle helmets, leaving Dragonetti to burn to death in the sun. Frost confronts the remaining elders of the Vampire Council, asking for 12 people to "volunteer" for his "La Magra" project.

While Blade purchases more items for hunting, Whistler and Karen discuss her latest attempt at a cure. Karen is sure that the new formula will work on her, but is unsure what effects it might have on Blade since he was born with vampirism. The stronghold is attacked by Frost's followers and Karen is abducted while Whistler is brutally beaten by the vampires.

Blade returns to find Whistler in severe pain and infected by the vampire bites. In an emotional scene, Blade assists Whistler in committing suicide before loading up to raid Frost's stronghold.

Blade kills many of Frosts' followers, even trying the EDTA formula (which makes vampires swell up and explode in a shower of blood). Blade finally reaches the final room of Frost's hideout, where he is confronted by a lone woman who calls him "Eric." It is Blade's mother, reborn to serve the Frost.

Frost ambushes Blade, taking him hostage while revealing that HE (Frost) was the vampire who bit Blade's mother. Blade and Karen are transported to another location. Blade, despondent, asks Karen if she has finished her "miracle cure." Karen says that the cure would presumably rob Blade of his strength and healing powers while neutralizing his thirst, effectively making Blade fully human.

Karen escapes using the mace previously given to her by Whistler, and frees Blade-now terribly weak. Knowing that there is only one way to get Blade healed in time, Karen requests that Blade take some of her blood. Blade resists at first, but finally seeing no other choice, bites Karen.

Blade's mother comes in during the process and she fights Blade, ultimately being stabbed in the heart with a bone. Blade fights his way through the remaining vampire guards, reclaiming his trademark sword and decapitating Quinn to reclaim his sunglasses. Blade then takes on the vampire guards in marital-arts fashion, kicking, punching and throwing them around. Mercury attempts to kill Karen who opens fire with a shotgun containing silver buckshot, but Mercury is too fast and knocks the gun out of Karen's hands and easily bests her in hand-to-hand combat. Karen finally kills Mercury by using the garlic mace to spray Mercury in her mouth just as she is about to bite Karen, making Mercury's head explode in a gory mass of blood and brains.

Blade and La Magra fight, effectively clashing swords. Blade cuts off Magra's arm and slices him in half, but the Blood God merely regenerates without any effort. La Magra taunts Blade, mentioning the "serum" that Blade is so dependent on. Blade realizes that Magra is actually referring to the EDTA vials that Blade brought on the hunt. He grabs the packet of vials and unloads every one into the Blood God. La Magra swells up and explodes in a massive shower of blood.

Karen and Blade exit the ruins. Blade finally declines the cure, deciding that even with Frost gone there are many other vampires out there and he needs the additional skills. Blade asks Karen to make him a more efficient serum, and she agrees.

The movie ends with Blade resuming his vampire hunting ways in a Russian-speaking country.

Copyright © 2021 filmarena.cz | Created by: tvorba webových stránek
We have 7609 products for you.