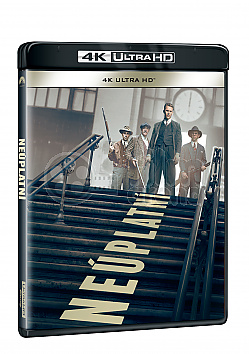 Federal agent Elliot Ness assembles a personal team of mob fighters to bring Chicago crime boss Al Capone to justice using unconventional means during the mob wars of the 1920s. This fictionalized account of the arrest of Al Capone is heavy on style and gunfire. The end shootout combines a baby carriage and stairs with a nod to Eisenstein's _The Battleship Potemkin_.

Prohibition in the United States has led to an organized crime wave in the 1920s and early 1930s. Various gangs bootleg vast amounts of alcohol and control their businesses with violence and extortion. The problem is most serious in Chicago, where gang leader Al Capone (Robert De Niro) has almost the whole city (even the city's mayor) under his control, and supplies poor-quality liquor at high prices. While being interviewed by a reporter, Capone insists that he is a legitimate businessman who is responding to the will of the people. This is intercut with a Capone associate, the Bowtie Man (Vito D'Ambrosio), shaking down a restaurant owner who has chosen to buy from one of Capone's competitors. The owner refuses to be intimidated, and the Bowtie Man appears to back off. Some time later, Capone's white-suited enforcer, Frank Nitti (Billy Drago), enters the restaurant, drops a briefcase next to a chair, and casually walks away. The briefcase contains a bomb, which destroys the restaurant, killing most of its patrons.

Treasury Department agent Eliot Ness (Kevin Costner) is put in charge of leading the crusade against Capone and his empire. Ness' initial strategy is to conduct raids using a large squad of uniformed officers, but his first attempt fails when he breaks into a warehouse storing umbrellas (although it is implied by Capone's reaction to the newspaper headline about Ness' mistake that it was indeed a liquor warehouse, but his men had been tipped off by the corrupt police chief, Mike Dorsett (Richard Bradford).

Embarrassed over the fiasco and seeking ideas for a change of tactics, Ness has a chance encounter with Jimmy Malone (Sean Connery), an incorruptible Irish beat cop who understands the way Capone does business, and decides to ask for his help. Reluctant at first, Malone urges Ness to become as ruthless as the gangsters he wants to take down: "He pulls a knife, you pull a gun. He sends one of yours to the hospital, you send one of his to the morgue. That's the Chicago way, and that's how you get Capone." With corruption running rampant throughout the Chicago police force, Malone suggests that Ness recruit directly from the police academy in order to find team members who have not yet had a chance to come under Capone's influence. They start with the academy's best shooter, George Stone (Andy Garcia). When he reveals his real name is Giuseppe Petri, Malone is leery about having an Italian-American on the team, but Stone quickly wins him over with his coolness under pressure. With their fourth addition, bookish Treasury accountant Oscar Wallace (Charles Martin Smith), detailed to Chicago from Washington, Ness has built an incorruptible team, capable of combating Capone.

Their first raid takes place in a local post office whose storeroom is used to house Capone's illegal liquor. Malone and most of the police know where the alcohol is, but they leave it alone because no one wants to provoke Capone and his gang. The raid succeeds without incident, though Capone later kills the man who had been in charge of the storeroom with a baseball bat. As the four pick up steam and become noted by the press, Wallace begins to probe the finances of the Capone organization. He believes that a feasible method of prosecution is through a tax evasion charge, if nothing else. At one point, Ness is visited by a Chicago alderman (Del Close) who is also under Capone's control. The alderman tries to bribe Ness into dropping the investigation, but Ness angrily rejects the offer and throws him out in full view of the team. As he leaves, he mockingly refers to them as "untouchable" and says that Capone, who is known as a cop-killer, can get to anyone he chooses, one way or another.

The alderman's words prove to be true when Nitti makes veiled threats toward Ness and his family outside his house, and drives off before Ness can capture him. Realizing that Capone has targeted him, Ness orders his wife and daughter moved to a safer place; Malone and Stone then bring word of a large whiskey shipment coming in from Canada, and the team flies north to set up a raid at the border.

During the raid, Ness's team and a squad of Royal Canadian Mounted Police officers intercept the shipment, arresting or killing everyone involved. Malone captures one of Capones bookkeepers, George (Brad Sullivan), and the team tries to persuade him to provide evidence against Capone. George initially refuses to cooperate, even after Malone assaults him. However, he changes his mind once Malone shoots a thug (who was actually already dead) in the mouth to frighten him. Enraged even further, Capone orders his men to hunt down and kill Ness (even Ness' family), knowing that with Ness dead, the Untouchables will be finished. Ness's wife, meanwhile, has just given birth to their second child.

At the police station, where the Untouchables are being congratulated, Wallace prepares to escort George into protective custody. However, they are both shot and killed by Nitti, disguised as the policeman operating the elevator; when the bodies are found, the word "TOUCHABLE" has been written on the wall in their blood. Ness is left with insufficient evidence to press charges, and the frustration drives him into challenging Capone in public to a physical fight in front of his son and several armed henchmen. Malone intervenes and forces Ness to back down, defusing the confrontation.

Malone tells Ness to stall the district attorney from dropping the case while he searches for information regarding Walter Payne (Jack Kehoe), another of Capone's bookkeepers. A subpoena is issued for Payne, prompting Capone's men to make plans to get him out of town. Malone angrily confronts Dorsett, knowing that he sold out Wallace, demanding information on where Capone plans to move Payne. After a brutal fistfight, Dorsett shares what he knows, but warns Malone that Capone's assassins will retaliate. Malone calls Ness and instructs him to meet him at his apartment. As he does this, the Bowtie Man sneaks in through a window, armed with a knife. A shotgun-wielding Malone berates him for "bringing a knife to a gunfight," and throws him out. This proves to be a trap, however, as Nitti, perched on a nearby fire escape, repeatedly shoots Malone with a tommy gun. He is barely alive when Ness and Stone find him, and he shows Ness which train Payne will be taking before dying in his arms.

Ness and Stone arrive at Union Station and find Payne guarded by several gangsters. One of the bodyguards recognizes Ness from the earlier altercation with Capone and quickly alerts his comrades. After a fierce shootout (an homage to the famous Odessa Steps scene from The Battleship Potemkin), the Bowtie Man decides to cut his losses and uses Payne a human shield, threatening to kill him unless Ness and Stone back down. Stone shows his marksmanship skills by shooting the Bowtie Man in the head. Out of gratitude, Payne offers his full cooperation with the investigation.

Payne testifies in court against Capone, admitting his role in channeling money to Capone over the last three years. Ness, however, notices Capone relaxed and even smiling, despite the probability of serving a long prison sentence, and also sees Nitti carrying a gun in court. He takes Nitti out of the courtroom with the bailiff and discovers that Nitti has permission from the corrupt mayor of Chicago to carry the weapon. Ness then identifies Nitti as Malone's murderer after finding Malone's address on a matchbook in Nitti's pocket.

Panicking, Nitti shoots the bailiff and runs up to the roof, exchanging gunfire with Ness all the way. Eventually, Ness gets Nitti in his sights, but cannot bring himself to shoot the man in cold blood. Nitti gives himself up to Ness, Ness telling him that he'll see him burn because he murdered Malone. Stating that Malone died "screaming like a stuck Irish pig" and that Ness should think about that when he, Nitti, is tried and convicted for the murder but set free anyway. Enraged at the thought that Nitti will escape punishment for his crimes, and provoked to revenge, Ness pushes Nitti off the roof. He shouts to the screaming thug, "Did he sound anything like that?" before Nitti dies on impact with a parked car.

Back inside the courthouse, Stone shows Ness a document from Nitti's jacket that shows bribes paid to the jurors, explaining Capone's relaxed mood. The judge has no intention of using it as evidence and is fully prepared to let Capone go free, inadvertently revealing his own corruption or fear of the crime boss. In a last ditch effort, Ness talks the judge into doing the right thing, bluffing him into believing that the judge's name is among those in the bookkeeper's ledger of payoffs. As a result, the judge decides to switch this jury with the one in another courtroom. Before the trial can continue, Capone's lawyer changes the plea of "not guilty" to one of "guilty" without Capone's consent. Capone is sentenced to 11 years in prison. Ness taunts Capone, who pretends not to hear as he is taken into custody.

As he packs up his office, Ness contemplates the Saint Jude medallion that Malone had carried with him for many years (linked to his call box key), and which Malone had given to him before dying. Ness gives the medallion to Stone, reasoning that since Jude is the patron saint of police officers, Malone would have wanted him to have it. Out on the street, a reporter wishes to have a word from Ness, but Ness modestly downplays his role in the showdown. When the reporter mentions that Prohibition is due to be repealed and asks what Ness might do then, Ness responds, "I think I'll have a drink."