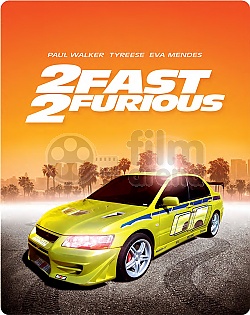 Former cop Brian O'Conner who teams up with his ex-con pal Roman Pearce to transport a shipment of 'dirty' money for shady Miami-based import-export dealer Carter Verone, while actually working with undercover agent Monica Fuentes to bring Verone down.

Florida street racer Tej (Ludacris) is looking for a driver and calls Brian O'Conner (Paul Walker) to a race. Brian is an ex-cop who has the hottest car now. He races against Suki (Devon Aoki), Orange Julius (Amaury Nolasco) and Slap Jack (Michael Ealy) and wins. The police arrive and give chase, capturing Brian. Agent Markham (James Remar) and Agent Bilkins (Thom Barry) brief Brian and ask him to infiltrate a criminal's gang. They try to team him with Agent Dunn (Edward Finlay), but he's not very smart. Brian suggests bringing in an old friend by the name of Roman Pierce (Tyrese Gibson) instead.

After a brief argument, Roman agrees, and they are briefed by Monica Fuentes (Eva Mendes). Thery are given new cars and meet with the criminal Carter Verone's henchmen, and Monica introduces them to Carter (Cole Hauser). Carter sends them on a race to get a package and checks their records. Carter hires them to drive to the Florida Keys for a drug deal. Brian and Roman bring their cars to Tej to check out. The cars are wired with tracking devices, so Brian and Roman race a pair of other drivers for pink slips.

Both Brian and Roman have eyes for Monica, but Carter warns them away from her. Carter brings in a known detective Whitworth (Mark Boone Junior) and tortures him to get a "window" for his team to make a smuggling run, then threatens Monica with similar treatment.

The next day, Monica tells Brian that Carter intends to kill them. Carter continues his cheesy villain antics, telling Brian that his henchmen Roberto (Roberto Sanchez) and Enrique (Mo Gallini) will be riding with them. Brian and Roman make plans with Tej and Suki for an escape.

Brian and Roman meet with Roberto and Enrique to get the cash for the drug deal, and detecive Whitworth directs the police to bust them. They out-drive the cops while agent Markham stakes out Carter's plane, waiting for the deal to complete. Brian and Roman drive into a warehouse while the cops look on stupidly. Tej's gang bursts out of the warehouse in trucks, smashing cop cars, while a bunch of street racers emerge as a distraction. The cops follow the cars with tracking devices, but Brian and Roman are driving the cars they won in an earlier race. Roman uses a goofy ejector seat to get rid of Roberto, but Enrique changes the meet point.

The cops try to take down Carter's jet, but it's a decoy, too. Carter realizes Monica is an informant, and orders Enrique to kill Brian. Roman comes to Brian's rescue, and they chase after Carter, who has boarded a boat. They race after him, and jump the car onto the boat. Monica arrests Carter. Agent Markham clears their records and Monica eyes Brian. As Brian and Roman leave, they show each other the cash they've skimmed from the drug deal and laugh.