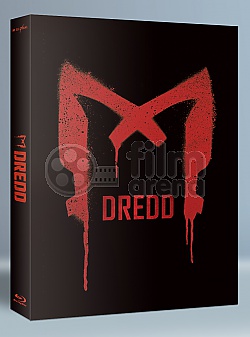 
The future America is an irradiated waste land. On its East Coast, running from Boston to Washington DC, lies Mega City One - a vast, violent metropolis where criminals rule the chaotic streets. The only force of order lies with the urban cops called "Judges" who possess the combined powers of judge, jury and instant executioner. Known and feared throughout the city, Dredd is the ultimate Judge, challenged with ridding the city of its latest scourge - a dangerous drug epidemic that has users of "Slo-Mo" experiencing reality at a fraction of its normal speed.

During a routine day on the job, Dredd is assigned to train and evaluate Cassandra Anderson, a rookie with powerful psychic abilities thanks to a genetic mutation. A heinous crime calls them to a neighborhood where fellow Judges rarely dare to venture - a 200 storey vertical slum controlled by prostitute turned drug lord Ma-Ma and her ruthless clan. When they capture one of the clan's inner circle, Ma-Ma overtakes the compound's control center and wages a dirty, vicious war against the Judges that proves she will stop at nothing to protect her empire. With the body count climbing and no way out, Dredd and Anderson must confront the odds and engage in the relentless battle for their survival.

The future United States is an irradiated wasteland known as the Cursed Earth. On the east coast lies Mega-City One, a violent metropolis with 800 million residents and 17,000 crimes reported daily. There, an addictive new drug called "Slo-Mo" has been introduced, which slows the user's perception of time to 1% of normal. The only force for order are the Judges, who act as judge, jury and executioner. Judge Dredd (Karl Urban) is tasked by the Chief Judge (Rakie Ajola) with evaluating new recruit Cassandra Anderson (Olivia Thrilby), a powerful psychic who failed the aptitude tests to be a Judge.

In Peach Trees, a 200-storey slum tower block, drug lord Madeline Madrigal, also known as "Ma-Ma" (Lena Headley), executes three rogue drug dealers (Travis Snyders, Chad Phillips) by having them skinned, infused with Slo-Mo and thrown down the atrium from the top floor. Dredd and Anderson are sent in to investigate and learn of a drug den, which they raid. They arrest a thug named Kay (Wood Harris), whom Anderson's mind probe reveals to be the one who carried out the drug dealers' execution. Dredd decides to take him in for questioning. In response, Ma-Ma's forces seize the tower's security control room and seal the building, using its blast shields under the pretence of a security test, preventing the Judges from leaving or summoning help.

Ma-Ma orders Dredd and Anderson killed, and the Judges fight their way through dozens of armed thugs. Arriving at the 76th floor, the Judges are assaulted by Ma-Ma and her men with miniguns that rip through the walls, killing numerous residents. By breaching a damaged outer wall, the Judges become able to call for backup. Meanwhile, Ma-Ma sends her henchman Caleb (Warrick Grier) to confirm the Judges' deaths, but when they meet, Dredd throws Caleb off the tower in full view of Ma-Ma.

Dredd suspects Ma-Ma is desperate to keep Kay quiet and beats him for information. Anderson intervenes and uses her psychic abilities to read Kay's mind and learn that Peach Trees is the centre of Slo-Mo production and distribution. Anderson suggests they hide while awaiting assistance but Dredd insists they move up the tower and pursue Ma-Ma. Judges Volt and Guthrie respond to Dredd's call, but Ma-Ma's computer expert denies them entry by persuading them the call is part of the security drill. A pair of armed teens confront Dredd and Anderson, allowing Kay to disarm Anderson and escape with her as hostage. He brings her to Ma-Ma's base on the top floor.

While Dredd works his way toward Ma-Ma, she bribes the corrupt Judges Lex (Langley Kirkwood), Kaplan (Michele Levin), Chan (Karl Thaning) and Alvarez (Edwin Perr) to kill Dredd. Dredd encounters Chan and is suspicious that he does not ask about Anderson's status. Seeing his cover blown, Chan attacks Dredd, who kills him. Meanwhile, Kay tries to execute Anderson with her own weapon, but the pistol's DNA scanner does not recognize him and blows his arm off. Anderson escapes and later encounters Kaplan, whom she promptly kills after reading her mind. Elsewhere, Dredd kills Alvarez but runs out of ammunition, and Lex shoots him in the abdomen. Lex moves in to execute Dredd, but Dredd stalls him long enough for Anderson to arrive and kill Lex.

Anderson and Dredd obtain the code to Ma-Ma's apartment from her hacker and confront her. Ma-Ma tells Dredd that in the case of her death, a device on her wrist will detonate explosives on the top floors, destroying the building. Dredd reasons that the detonator's signal will not reach the explosives from the ground floor, so he forces Ma-Ma to inhale Slo-Mo and throws her down the atrium to her death.

In the aftermath, Anderson accepts that she has failed her evaluation by getting disarmed, and leaves. The Chief Judge asks Dredd about Anderson's performance; he responds that she has passed.