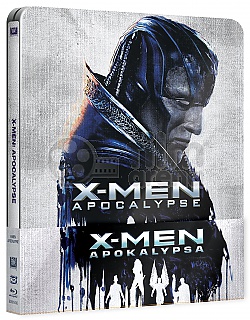 Since the dawn of civilization, he was worshiped as a god. Apocalypse, the first and most powerful mutant from Marvel's X-Men universe, amassed the powers of many other mutants, becoming immortal and invincible. Upon awakening after thousands of years, he is disillusioned with the world as he finds it and recruits a team of powerful mutants, including a disheartened Magneto, to cleanse mankind and create a new world order, over which he will reign.

As the fate of the Earth hangs in the balance, Raven with the help of Professor X must lead a team of young X-Men to stop their greatest nemesis and save mankind from complete destruction.

Apocalypse picks up ten years after the events of X-Men: Days of Future Past timeline, with Professor X (James McAvoy), Magneto (Michael Fassbender), and Mystique (Jennifer Lawrence) still estranged from one another. Their paths are forced back together when Apocalypse awakens in his tomb and, finding the 1980s era wanting, decides to give the world a forced evolutionary jumpstart

His assistants, the Four Horsemen, are mutants familiar to X-Men comics fan. Apocalypse finds Ororo Munro, a.k.a. Storm (Alexandra Shipp) on the streets of Cairo. Angel (Ben Hardy) is participating in a fight club in Berlin. Psylocke (Olivia Munn) is working in Eastern Europe for Caliban, a mutant power broker. The final Horseman is Magneto, who has been attempting to live a normal life in Poland with a woman he loves.

Meanwhile, Mystique has been helping to rescue oppressed mutants, including Nightcrawler (Kodi Smit-McPhee), and becomes involved in the struggle against Apocalypse when she hears what happened to Erik. This leads her to Charles Xavier, whose school for gifted youngsters has grown significantly over the past decade. His students include young Jean Grey (Sophie Turner) and Scott Summers, a.k.a. Cyclops (Tye Sheridan).