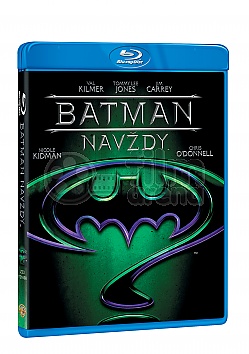 The Dark Knight of Gotham City confronts a dastardly duo: Two-Face and the Riddler. Formerly District Attorney Harvey Dent, Two-Face incorrectly believes Batman caused the courtroom accident which left him disfigured on one side; he has unleashed a reign of terror on the good people of Gotham. Edward Nygma, computer-genius and former employee of millionaire Bruce Wayne, is out to get the philanthropist; as The Riddler he perfects a device for draining information from all the brains in Gotham, including Bruce Wayne's knowledge of his other identity. Batman/Wayne is/are the love focus of Dr. Chase Meridan. Former circus acrobat Dick Grayson, his family killed by Two-Face, becomes Wayne's ward and Batman's new partner Robin the Boy Wonder.

The legendary dark knight, Batman, has once again personal demons to face and insanevillains who seek to destroy Gotham. But Batman is growing tired of his nightly paradeas Batman and daily existence as the rich and powerful Bruce Wayne. He is haunted bymemories of his parent's death and begins to remember details that he didn't before.

Two Face, a psycho killer who blames Batman for his scarred split face, teams up with The Riddler, anex-employee of Bruce Wayne Enterprises, who was refused a partnership by Wayne, ashis invention is very dangerous. Bruce/ Batman is thrown into contact with the beautifulDr. Chase Meridian who is in Gotham to review the case of Two Face. A romancedevelops between the two, as Chase desires both Bruce and Batman, unaware that theyare the same person. Bruce desires Chase more than anyone, knowing that she understandsthe human mind better than anyone else. He asks her to the Charity Circus that he isinvited to with the other elite of Gotham. But the event is crashed when Two Face andhis thugs also decide to attend uninvited. A family of acrobats are killed by Two Face,leaving only the youngest son, Dick "Robin" Grayson, alive and thirsting for revengeagainst Two Face.

Taken in by Wayne, he soon discovers Bruce's carefully hidden alter-ego, Batman and takesthe Batmobile on a spin, interrupting a date between Chase and Bruce. He begs Bruceto allow him to be his partner when they finally return to the Bat Cave. Alfred, the elderlybutler, refuses to spurn Dick's need for revenge, telling Bruce that once he was like that too.

Meanwhile, an entrepreneur calling himself Edward Nygma, who is actually Two Face's new accomplice The Riddler, is growing more and more rich, powerful and famous because of his invention of a new3-D way of watching T.V. But he is in fact sucking all the secrets from the citizens ofGotham and growing extremely intelligent. He is gunning for Bruce as well as Batman anddiscovers that they are they same person. Soon the two villains are up against the newlyformed partnership between Batman and Robin. When Chase is kidnapped by the evilpair, Batman and Robin go to The Riddler and Two Face's hideout on a metal-fabricated artificial island,after Alfred and Bruce manage to crack the riddles that The Riddler has been leaving him and they discover that Edward Nygma is the green clad villain.

In the end Batman is faced with the decision to save either Chase or Robin from the jagged rocks in a pit that they are suspended over by The Riddler. He tricks The Riddler however and breaks the giant hourglass structure that contains all the stored brainwaves of the citizens of Gotham. He saves both Chase and Robin, and uses Two Face's coin to kill the madman, by throwing a multitude of coins instead of only Two Face's special one. Robin understands that it is better that he didn't kill Two Face, agreeing with Bruce that such a crime is far too much too bear. At the end Edward claims that he is Batman, flapping the sleeves of his straight jacket in a grotesque imitation a bat's wings, cackling as Chase makes her way back outside of the lunatic asylum and informs Bruce that no one will ever know he is Batman. She leaves Gotham, never to see our secretive shadow destined hero ever again. Batman and Robin are now partners and the dark knight is indeed always going to the protector of the Gothic metropolis of Gotham.