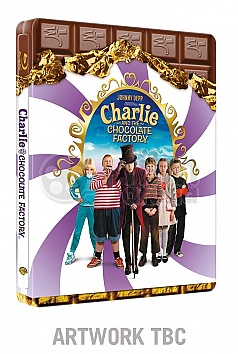 When Willy Wonka decides to let five children into his chocolate factory, he decides to release five golden tickets in five separate chocolate bars, causing complete mayhem. The tickets start to be found, with the fifth going to a very special boy, called Charlie Bucket. With his Grandpa, Charlie joins the rest of the children to experience the most amazing factory ever. But not everything goes to plan within the factory.

Charlie and the Chocolate Factory

Willy Wonka (Johnny Depp) has built the greatest and largest chocolate factory in the world. After some of his workers steal his secret recipes, Willy Wonka kicks his workers out and closes the doors. For 15 years, no one has seen any workers entering or leaving the factory, yet his chocolate candy is still being produced and shipped around the world. One day when Willy Wonka is getting his hair cut, he realizes that he is getting old, and he needs a successor. He comes up with a plan to open his factory and reveal his secrets to five lucky children, who find golden tickets inside Wonka chocolate bars.

The golden tickets are sent around the world and soon 4 winners are announced. The first to find a ticket is the greedy Augustus Gloop (Philip Wiegratz). Second is the spoiled Veruca Salt (Julia Winter). Next is the competitive gum-chomping Violet Beauregard (AnnaSophia Robb). Fourth is the chocolate-hating techie Mike Teevee (Jordan Fry). There is one golden ticket left, and the achingly poor Charlie Bucket (Freddie Highmore) finds it. Charlie chooses his Grandpa Joe (David Kelly) to accompany him inside the factory, a place his Grandpa Joe once worked before it was closed. The other four children with their parents, and Charlie with Grandpa Joe, enter the factory and begin the tour of a lifetime.

The factory is not like your standard factory, but a living factory which mixes chocolate by waterfall, and boasts a river of chocolate that enables the group to tour the factory by boat. They experience the great glass Wonkavator, which can go anywhere in the factory, in any direction, at the touch of a button. During the tour, the group learns that all the work is now being done by the Oompa-Loompa tribe, who are paid in cocoa beans. The factory is indeed fantastic: trees and grass are edible, trained squirrels shell nuts for the chocolate bars, entire meals are contained in a stick of gum, and incredible technology allows chocolate to be sent by television. The four rotten children get to interact with some of Willy Wonka's fantastic inventions with unfortunate consequences which force them off the tour before it is completed. Charlie is the last child left, and Willy Wonka awards Charlie the greatest prize of all, the keys to the factory, which Charlie refuses. Accepting the prize means living Willy Wonka's life: cut off from family and the world to devote oneself to the pursuit of chocolate perfection. After some time, Willy Wonka sees that while Charlie may be the right person for the factory, the life that Willy Wonka chose for himself isn't right for Charlie. He relents and allows Charlie to bring his entire family into the factory with him, and they all live happily ever after.