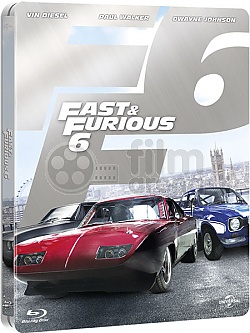 Since Dom (Diesel) and Brian's (Walker) Rio heist toppled a kingpin's empire and left their crew with $100 million, our heroes have scattered across the globe. But their inability to return home and living forever on the lam have left their lives incomplete. Meanwhile, Hobbs (Johnson) has been tracking an organization of lethally skilled mercenary drivers across 12 countries, whose mastermind (Evans) is aided by a ruthless second-in-command revealed to be the love Dom thought was dead, Letty (Rodriguez). The only way to stop the criminal outfit is to outmatch them at street level, so Hobbs asks Dom to assemble his elite team in London. Payment? Full pardons for all of them so they can return home and make their families whole again.

Following their successful Rio heist, Dominic Toretto and his crew of professional criminals have retired around the world: Dominic lives with Elena; his sister Mia lives with Brian O'Conner and their son, Jack; Gisele and Han have moved to Hong Kong; and Roman and Tej live in luxury.

Diplomatic Security Service (DSS) agent Luke Hobbs and his partner Riley Hicks investigate the destruction of a Russian military convoy by former British Special Forces soldier Owen Shaw and his crew. Hobbs tracks down Dominic and persuades him to help take down Shaw after showing him a recent photo of the supposedly long-dead Letty Ortiz, Dominic's former girlfriend. Dominic gathers his crew together and they accept the mission in exchange for full amnesty for their past crimes, allowing them to return home to the United States; Mia and Elena remain with Jack.

The crew travels to London where one of Shaw's henchmen leads them to Shaw's hideout, but it is revealed to be a trap intended to distract the crew and police while Shaw's crew performs a heist elsewhere. Shaw flees by car, detonating his hideout behind him and disabling most of the police, leaving Dominic, Brian, Tej, Han, Gisele, Hobbs and Riley to pursue him. Letty arrives to help Shaw, and shoots Dominic without hesitation before escaping. Back at their headquarters, Hobbs tells Dominic's crew that Shaw is stealing components to create a Nightshade device which can disable power in an entire region; he intends to sell it to the highest bidder. Meanwhile, Shaw's investigation into the opposing crew reveals Letty's relationship with Dominic, but she is revealed to be suffering from amnesia.

Dominic's crew investigates a Shaw subordinate who reveals Shaw's connection to Arturo Braga, a drug lord imprisoned by Brian in Fast & Furious 4. Brian returns to the United States as a prisoner to gain access to Braga, who discloses how Letty survived the explosion that was thought to have killed her ; Shaw attempted to finish her off but after learning of her amnesia, he took her in. Aided by a former ally in the FBI, Brian is released from prison. In London, Dominic challenges Letty in a street racing competition, and afterwards returns her necklace he had kept.

Tej tracks Shaw's next attack to a NATO base in Spain. His crew assaults a military convoy carrying a computer chip to complete the Nightshade device. Dominic's crew interferes, destroying the convoy while Shaw, accompanied by Letty, commandeers a tank and begins destroying cars along the highway. Brian and Roman manage to flip the tank; Letty is thrown from the tank and Dominic risks his life to save her from falling to her death. Shaw and his men are captured, but he reveals that he has kidnapped Mia. The crew is forced to release Shaw, and Riley (revealed to be working for Shaw) leaves with him ; Letty chooses to remain with Dom. Shaw's group board a large aircraft in motion on a runway as Dominic's crew gives chase. Dominic, Letty, Brian, and Hobbs board the craft ; Brian rescues Mia and they escape using a car on board. The plane attempts to take off but is held down by excess weight as Han, Gisele, Roman, Tej, Brian, and Mia tether the plane to their vehicles. Gisele sacrifices herself to save Han from one of Shaw's henchmen. Letty kills Riley and escapes with Hobbs to safety, but Dominic pursues Shaw and the computer chip. Shaw is thrown from the plane as it crashes into the ground ; Dom drives one of the remaining cars through the nose of the exploding plane and reunites with his crew, giving the chip to Hobbs to secure their amnesty.

In the aftermath, Dominic and his team return to the United States. Hobbs and Elena (now working with Hobbs) arrive to confirm the crew are free ; Elena accepts Dominic has chosen Letty over her. As Dominic's crew gather to share a meal, Dominic asks Letty if the gathering feels familiar ; she answers no, but that it feels like home. In Tokyo, while Han is in a car chase, he is hit by an oncoming car ; Han's car explodes, killing him (scene from FnF2). The other car's driver (Jason Statham) walks away from the scene and calls Dominic, leaving him a message : "You don't know me, you're about to..."