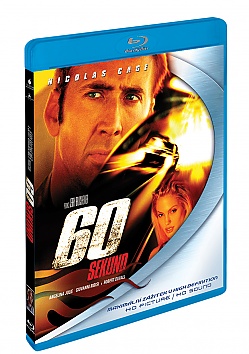 Car theft in Long Beach went down 47% when Randall "Memphis" Raines walked away from the life. He gets dragged back into it by assuming the job his brother Kip screwed up for stolen-car broker Raymond Calitri: steal 50 exotic cars and have them on a container ship by 8 AM Friday morning, and he got this news on a Monday. With Calitri threatening to kill him and Kip, and the police GRAB unit breathing down his neck, Memphis reassembles his old crew and attempts to pull off the logistically impossible.

Nicolas Cage (Face/Off, The Rock), Angelina Jolie (Lara Croft:Tomb Raider, Wanted) and Vinnie Jones (Snatch, The Condemned) team up to bring you GONE IN 60 SECONDS...an Action-Packed Heist caper that combines hi-tech action with refreshing comedy and never lets up for a minute. Legendary car booster Randall "Memphis" Raines (Nicolas Cage) thought he'd left the fast lane behind -- until he's forced out of retirement in a do-or-die effort to save his kid brother (Giovanni Ribisi, LOST IN TRANSLATION, TV's FRIENDS) from the wrath of an evil mobster! But with speed to burn and attitude to spare, Memphis hastily reassembles his old crew -- a rogues' gallery including Academy Award-winner Robert Duvall (1983 Best Actor, TENDER MERCIES; OPEN RANGE) -- and floors it in a full-throttle race to pull off the ulimate car heist: 50 exotic beauties in 24 hours -- and the cops are already on to them! Directed by Dominic Sena and written by Scott Rosenberg and featuring a great soundtrack, GONE IN 60 SECONDS is an action-packed thrill ride that comes out fast and never slows down...Ice Cold and Hot Wired.