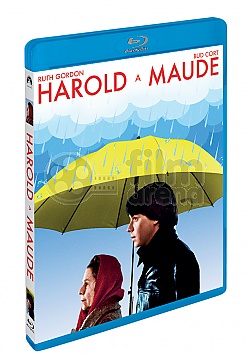 Self-destructive and needy but wealthy teenager Harold is obsessed with death and spends his leisure time attending funerals, watching the demolition of buildings, visiting junkyards, simulating suicides trying to get the attention of his indifferent, snobbish and egocentric mother, and having sessions with his psychologist. When Harold meets the anarchic seventy-nine-year-old Maude at a funeral, they become friends and the old lady discloses other perspectives of the cycle of life for him. Meanwhile, his mother enlists him in a dating service and tries to force him to join the army. On the day of Maude's eightieth birthday, Harold proposes to her but he finds the truth about life at the end of hers.

Harold Chasen is a nineteen-year-old boy obsessed with death so much so that he torments his mother (Vivian Pickles) with elaborately staged fake suicides.

Harold meets Maude, 79 years old, at a funeral. The pair form a bond, with Maude slowly opening Harold to the sensual pleasures of music and art and the general anarchy of living for the moment and doing whatever one pleases. Their relationship turns sexual, despite Harold's mother's best attempts to get her son to settle down with someone she considers appropriate.

Upon Maude's 80th birthday at a surprise party Harold has thrown for her Maude reveals that she has taken poison and will be dead by midnight. She restates her firm belief that 80 is the proper age to die.

Harold has Maude rushed to the hospital, but it is too late. In the final sequence, it appears that a grief-stricken Harold drives his car (a Jaguar he had earlier transformed to look like a hearse) off a cliff. The final shot, however, reveals Harold with the banjo Maude gave him strapped around his shoulder upon the cliff. He walks away, picking out on his banjo the notes to Cat Stevens' "If You Want to Sing Out, Sing Out".

Bonuses to HAROLD a MAUDE (Blu-ray)

Copyright © 2020 filmarena.cz | Created by: tvorba webových stránek
We have 10931 products for you.