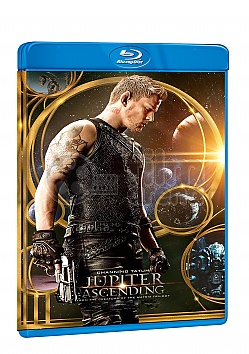 Jupiter Jones was born under a night sky, with signs predicting that she was destined for great things. Now grown, Jupiter dreams of the stars but wakes up to the cold reality of a job cleaning other people's houses and an endless run of bad breaks. Only when Caine Wise, a genetically engineered ex-military hunter, arrives on Earth to track her down does Jupiter begin to glimpse the fate that has been waiting for her all along - her genetic signature marks her as next in line for an extraordinary inheritance that could alter the balance of the cosmos.

In the opening scene, Jupiter Jones (Mila Kunis) begins by talking about her parents. Her father was a Russian named Maximilian Jones (James D'Arcy). Maximilian met and fell in love with a woman named Aleksa (Maria Doyle Kennedy). They watch the stars together through his telescope. Later on, the two are expecting their child, which Maximilian wants to name Jupiter. Aleksa isn't too fond of the name. Two robbers break into the couple's home, and Maximilian gets shot. He dies in Aleksa's arms. Later on, Aleksa gives birth to Jupiter as she and her family are on a boat heading to America.

In the present, the adult Jupiter works as a janitor living in Chicago with her roommate Katharine Dunlevy (Vanessa Kirby). Jupiter hates her job and life, yet she is not very ambitious or eager to do anything else about it.

Three intergalactic bounty hunters - Falque (Spencer Wielding), Razo (Doona Bae), and Ibis (David Ajala) - are scoping out Jupiter's apartment, when they spot a man named Caine Wise (Channing Tatum) near the area. They realize that he is after Jupiter as well, and they go after him. Caine realizes he is being stalked, and he emerges from the building with his hover boots, defending himself with his shield and shooting back at the bounty hunters as they attack him. He flees the scene unharmed.

Jupiter has dinner with her family and asks her uncle Vassily (Jeremy Swift) for money. He refuses to give her money and makes a rude remark that Jupiter is too smart for her own good and that's why she is unable to find a husband. Aleksa defends her daughter angrily, though the rest of the family seems to agree with Vassily. Later, Jupiter is looking at a telescope on eBay. Her cousin Vladie (Kick Gurry) comes in and suggests she go to the fertility clinic and donate her eggs for some money. Jupiter agrees.

In space, the Abrasax siblings learn of Jupiter's existence. Their mother has died, and they now seek to inherit the earth as their own. Balem (Eddie Redmayne) awakens from a slumber after going through a successful planetary harvest. His brother Titus (Douglas Booth) is cavorting with other women in his lavish castle, while his aide Famulus (Gugu Mbatha-Raw) informs him that Caine, who has been sent by Titus, has located Jupiter. Kalique Abrasax (Tuppence Middleton) also has concerns over the inheritance of the earth.

At the apartment, Katharine is getting ready to go out. A group of alien creatures called Keepers appear in the apartment and incapacitate Katharine. Jupiter takes a picture of them with her phone, and they lunge at her. Moments later, Katharine wakes up, and neither her nor Jupiter seem to know what just happened.

Jupiter goes to the clinic under Katharine's name, which Balem is informed of. He orders his people to find Jupiter and kill her. The doctors put her on the bed and then levitate her. They probe her and know Jupiter's identity, and they attempt to kill her. Caine bursts in and kills the doctors as they reveal their Keeper form. He gets Jupiter out of there.

Jupiter finds herself atop the Willis Tower. Caine explains to her that he is a genetically-engineered being made up of a splice between a human and a wolf. Jupiter asks why she was almost just killed, and Caine tells her that she is the rightful owner of the planet. He claims that human life began not on Earth but on another planet called Orus. Jupiter also has no memory of the Keepers finding her and her taking a picture of them, which Caine explains as them erasing her memory. They are beamed up by a spaceship hovering over them, when the bounty hunters show up and destroy the ship. Caine carries Jupiter as they fly over the city with his hover boots as the bounty hunters chase after them. Jupiter falls in the attack, but Caine catches her before she hits the ground. Caine hijacks a small ship and escapes with Jupiter.

Caine and Jupiter drive away from the city, where Caine continues to explain the Abrasax family history. They have been splicing humans with other animals for ages, and are responsible for events such as the extinction of the dinosaurs. The two drive up to the home of Caine's former comrade Stinger Apini (Sean Bean), who is spliced with a bee. Stinger lives with his sick daughter. He and Caine were once skyjackers, but were let go following an incident, and now Stinger resents Caine. The two fight for a bit, when a swarm of bees appears. The bees surround Jupiter, but they never sting her. She moves her arms around them, and they fly around her. Stinger realizes who she is, and starts to refer to Jupiter as, "Your Majesty."

Caine tries to contact the Aegis (space cops) to help them. The bounty hunters and a few Keepers come up across Stinger's home. They chase after him, Caine, and Jupiter through the field outside his home. Falque corners Jupiter and nearly kills her, but Razo shoots him in the back and kills him first. They capture Jupiter and ascend on their ship. Caine manages to latch onto the ship as it leaves Earth.

Razo and Ibis bring Jupiter to the home of Kalique. She is friendly toward Jupiter and tells her that she is something of a genetic incarnation of Kalique's mother. She shows Jupiter a statue of her mother that looks exactly like Jupiter. Kalique says she is 14,000 years old, and her mother was 90,000 when she was murdered. Kalique walks into a bath and sheds her older image to a more youthful appearance. Stinger then shows up with the Aegis, led by Commander Diomika Tsing (Nikki Amuka-Bird). They order Kalique to hand Jupiter over to them.

In order for Jupiter to properly stake her claim on Earth, she is forced to go to Orus and go through a process for registration. She goes through several windows with an android lawyer until she is printed with a tattoo on her wrist and officially allowed to claim ownership of Earth. In the meantime, Jupiter attempts to sort of flirt with Caine. He thinks he isn't good for her and compares himself to a dog, even though Jupiter claims to love dogs.

Titus and his people take in Jupiter and apprehend Caine as Stinger hands them over to him in exchange for currency to help his ailing daughter. Titus and Jupiter have dinner together. Titus deduces that Jupiter has fallen in love with Caine, yet he still proposes to her. Afterwards, he shows Jupiter a room filled with thousands of vials that contain youth serums made from harvesting hundreds of dead humans. Jupiter is horrified by this realization.

Caine is imprisoned and placed in a chamber by Titus and his people. He plans to kill Jupiter after marrying her so that he can get his claim to Earth. Caine is expelled into space with his hands cuffed behind him. He uses his hover boots to burn the cuffs off and grab a floating pack that contains a spacesuit that automatically forms itself around Caine's body and saves him from suffocation. He only has 40 minutes of oxygen, but the Aegis emerge from hyperspace and rescue him.

The wedding is about to take place. Titus has his ring printed on his finger during the ceremony. Jupiter nearly has hers printed on when Caine comes crashing in on a ship into the cathedral. He comes up to the platform where Jupiter and Titus are and tells Jupiter that Titus plans to kill her. They hold Titus at gunpoint, but Jupiter only wants to go home.

Meanwhile, Balem is told that Jupiter is still alive. His lizard-rat hybrid henchman Sargorn (Neil Fingleton) is sent to Earth with his team of lizard-rat men to break into the home of Jupiter's family and capture them. Jupiter goes home and realizes this, forcing her to return to space and save her family.

Jupiter arrives at a mining facility on the planet where Balem resides. The Aegis are close behind her but are unable to enter because the planet is protected by a shield. Jupiter is brought before Balem, who shows her the family in the floor beneath them as they are floating and sleeping in stasis, while the henchmen get ready to splice into them. Using a special contract, Balem orders Jupiter to sign over her rights to rule over Earth if she wants her family to live. Realizing that either way, she and her family would die since Balem would harvest them on Earth, she refuses and smashes the contract.

Caine, with the help of Stinger, breaches the planet's shield. Tsing tells him his mission could get him killed, but she adds that he is tremendously courageous. Caine breaks into Balem's facility and kills the lizard-rat people to save Jupiter's family. He pulls Jupiter out with a device that opens a hole beneath her to get her away from Balem. Outside, the facility starts to destabilize and collapse. Caine fights Sargorn while Balem tries to kill Jupiter himself. Caine kills Sargorn by pushing him into the hole he made and removing the device to close the hole around Sargorn's neck, crushing it.

Jupiter's family is taken to safety while Jupiter fights back against Balem. Balem believes Jupiter is his mother reincarnated, and he admits that he murdered his mother, claiming that she told him she hated her life and wanted him to kill her. Jupiter shoots Balem once in the leg and whacks him across the face with a bar. The platform beneath them breaks slightly. Balem is unable to hold on and he plummets to his death. Jupiter falls but is rescued by Caine. With the help of the Aegis, everyone is able to escape the crumbling facility and get out safely.

Jupiter and her family are taken back home, with their memories erased of their capture or any interaction with evil lizard-rat people. Jupiter continues to go about her work and has made breakfast and coffee for her family. They surprise her by bringing out the telescope she wanted. She then tells the family that she has a date. They all press her with questions like, "Is he Russian?"

Jupiter joins Caine on the roof of another building. He has his wings restored to his back after his heroic deeds, and she has gotten hover boots of her own. Jupiter decides not to tell her family that she basically owns Earth. The two of them kiss and take flight over the city.