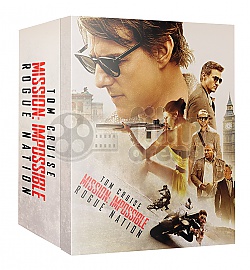 CIA chief Hunley (Baldwin) convinces a Senate committee to disband the IMF (Impossible Mission Force), of which Ethan Hunt (Cruise) is a key member. Hunley argues that the IMF is too reckless.

Now on his own, Hunt goes after a shadowy and deadly rogue organization called the Syndicate.

After intercepting nerve gas being sold to terrorists, Impossible Missions Force agent Ethan Hunt is convinced he can prove the existence of the Syndicate, an international criminal consortium. Reporting to an IMF substation to receive his next orders, Ethan is captured by the Syndicate, but escapes a torture chamber with the help of disavowedMI6agent and Syndicate operative Ilsa Faust. Meanwhile, CIA director Alan Hunley and IMF agent William Brandt appear before a Senate oversight committee , and Hunley succeeds in having the IMF disbanded and absorbed into the CIA, guaranteeing that Ethan will be captured within the day.

Six months later, Ethan is still on the run. Unable to find the Syndicate without help, he enlists former colleague Benji Dunn, arranging for him to attend Turandotin Vienna to search for Solomon Lane, whom he suspects is the leader of the Syndicate. Despite stopping three snipers, the Austrian Chancellor is killed by a car bomb.

Brandt recruits former agent Luther Stickell to find Ethan and prevent Hunleys team from killing him. Using a likeness of Ilsa left by Ethan, Brandt and Luther are able to track Ethan, Benji, and Faust to Morocco, where the three are infiltrating a secure server underneath a power station. After having stolen what they believe to be a ledger containing the names of all Syndicate agents, Ilsa takes the drive and a chase ensues. Ilsa manages to escape, but Benji reveals he had already made a copy of the data.

Ilsa returns to London, and attempts to pass the file to her handler, Attlee, who compels Ilsa to return to the Syndicate and finish her mission. She returns to Lane, only to find that Attlee has wiped the drive, which in fact contained an encrypted red box, property of the British government which required the Prime Ministers biometrics to be unlocked. The former IMF agents confront Ilsa, but when Lane's men abduct Benji, they are told they must deliver a decrypted copy of the drive to Lane.

Brandt contacts Hunley and reveals their location. At a charity auction, the two try and prevent Ethan from attacking the Prime Minister, whom they and Attlee take to a secure room. Ethan, having posed as Attlee, reveals himself and has the Prime Minister confirm the existence of the Syndicate, a classified project to perform missions without oversight, though the Prime Minister insists that he cancelled the project before it could leave the planning stages. When the real Attlee arrives, Ethan subdues him and he admits that he had been covering up the existence of the Syndicate since Lane hijacked the project and went rogue.

Luther discovers the file actually contains access to billions of pounds. Ethan memorizes the data and destroys the file to force Lane to release Benji and Ilsa in exchange for what he knows. He goads Lane, drawing him into the open and luring him into a bulletproof cell where he is taken into custody.

Some time later, Hunley and Brandt return to the oversight committee, where Hunley secures the reinstatement of the IMF, claiming that his previous efforts to have it disbanded were all to allow Hunt to go undercover. The committee, though skeptical, approves, and Brandt addresses Hunley as "Mr. Secretary.