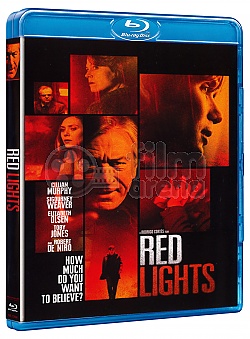 The skeptical psychologist Dr. Margaret Matheson and her assistant, physicist Tom Buckley, are specialists in disclosing fraudulent paranormal phenomena. When the famous psychic Simon Silver reappears to his public after many years of absence, Tom becomes singularly obsessed in determining whether Silver is a fraud or not.

Dr. Margaret Matheson and her partner, Tom Buckley are the world's foremost investigators of paranormal phenomena. Professional skeptics, they have debunked dozens of fraudulent mind readers, ghost hunters, faith healers and the like by detecting what Matheson calls red lights, subtle clues to the trickery behind each of these supernatural occurrences.

But when the legendary blind psychic Simon Silver comes out of retirement after 30 years, his once-fearless adversary Matheson warns Buckley to back off. Suspecting that the charismatic, spoon-bending mind reader was involved in the mysterious death of his most vociferous critic three decades earlier, she considers him far too dangerous to confront.

Buckley remains determined to discredit the hugely popular and seemingly genuine Silver, however, believing that doing so would cement his reputation and guarantee funding for Matheson and his research for years to come. As he becomes increasingly obsessed with his mission, Buckley enlists the aid of his star student, Sally. Together, they employ a dazzling array of high-tech tools to unlock the secrets of Silvers abilities. But the closer they get, the more formidable Silver becomes and the more Buckley begins to question his core beliefs. Science and the supernatural collide to play on audience perceptions as the researchers quest for the truth builds to a mind-blowing conclusion.

Big Spoiler: The true motivation for Buckley's obsession with searching out and investigating all of these practitioners over the years is that he is, in fact, searching for someone like himself: one genuinely gifted with such supernatural powers. As Silver is exposed, we learn it was Buckley all along who was executing the truly inexplicable occurrences.