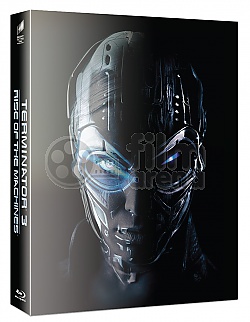 More than 10 years after 'Terminator 2', John Connor now exists only as a drifter - living 'off the grid', so no more Terminators from the future can hunt him down. Unfortunately, SkyNet does send another one back - and this one is called the T-X, even more powerful & advanced than the dreaded T-1000. However, another CSM-101 Terminator is also sent back to protect John against the T-X. Now, Skynet is patiently assuming control of civilian computer systems, under the guise of a computer virus.

John has also met his future wife, Kate Brewster, whose father - a U.S. Air Force General - is in charge of the military computer systems & is leery of up linking SkyNet. However, when the SkyNet virus infects the U.S military computers & leaves the country open to attack, the machines begin their horrific takeover. Soon a nuclear war will result - and the war against the machines will begin. Can the outdated CSM-101 Terminator eliminate the highly advanced T-X - or will a darker future await man following the nuclear attack?

- WEA FullSlip original packaging, for which we are preparing a very attractive finish,
- 3D lenticular magnet with a flip-flop effect changes T-X to T-850,
- 32-page PhotoBook,
- Collectible cards with the main protagonists,
- Numbered plastic collectible card and a holographic sticker with the indication of the number of your Collector's Edition,
- and as a special collector's bonus we are adding folded A4 poster of T-850 in action.


Hope you enjoy this edition too :-)

Terminator 3: Rise of the Machines

Following the events of "Terminator 2: Judgment Day", John Connor (Nick Stahl) has been living off-the-grid in Los Angeles. Although Judgment Day did not occur on August 29, 1997, the date given by the Terminator in the previous film, John does not believe that the prophesied war between humans and Skynet has been averted. Skynet sends a new Terminator model, the T-X (Kristanna Loken), back in time to July 24, 2004. Unable to locate John, it has been sent to kill his future lieutenants in the human Resistance. A more advanced model than previous Terminators, the T-X has an endoskeleton with built-in advanced weaponry, a liquid metal exterior similar to the T-1000, and the ability to control other machines. The Resistance sends a reprogrammed T-850 model 101 Terminator (Arnold Schwarzenegger) back in time to protect the T-X's targets, including Kate Brewster (Claire Danes) and Connor.

The T-X is transported into the city. It kills a woman, takes over her Lexus coupe and dons her clothing. It dials in via modem to the school district database and builds a list of targets. When it is stopped by an officer (Jay Acovone) for speeding, it increases its breast size and admires his Smith & Wesson 4506-1 pistol.

Brewster and her fiancee Scott Peterson (Mark Famiglietti)) are in a department store adding items to their wedding gift registry. Her father, Lieutenant General Robert Brewster (David Andrews) calls to tell her he won't be able to visit due to computer problems at work. A worker tells General Brewster that a virus has infected half the public internet and many military applications.

The Terminator arrives in the desert and locates a bar open for women's night. It enters and takes clothing from a male stripper. Meanwhile, John breaks into a veterinary office to obtain drugs to treat injuries he sustained in a motorcycle accident.

Brewster arrives at the veterinary clinic at 5:00 am to meet a customer whose cat is ill. She encounters John, but disarms him and locks him in a kennel cage just before the customer arrives. A few minutes later the T-X arrives, seeking Brewster. It kills the customer with the officer's pistol, but Brewster escapes to the parking lot where the T-X intercepts her. It interrogates her, seeking Connor's location. The Terminator arrives and interrupts its interrogation by smashing the T-X into a concrete block building at high speed with a truck. The Terminator learns Connor's location from Brewster, locks her in the back of her truck, and then finds Connor. When the T-X rises from the mass of concrete debris, The Terminator instructs Connor to run, and moves forward to intercept the T-X.

Connor gets in Brewster's truck and drives away at high speed. In a fight with the Terminator, the T-X discharges a plasma weapon that disables the Terminator. The T-X then takes over the emergency vehicles that the police and EMTs have brought to the scene and dispatches them in pursuit of Connor in Brewster's truck. The police are unable to stop the T-X and it enters a mobile crane and follows after the emergency vehicles. The Terminator revives and seizes a police motorcycle from an officer and begins to chase after the T-X. During the chase, the T-X and The Terminator destroy many vehicles and buildings. The Terminator finally ejects the T-X from the cab but the T-X catches hold of the truck by the rear bumper. The Transformer drops the crane hook into a manhole, engaging the cable. and jumps to Brewster's truck. As the T-X reenters the crane's cab, the cable runs out and the crane and rig are flipped upside down. The T-X emerges from the wreckage unable to pursue Brewster's truck any furhter.

Driving Brewster's truck, the Terminator tells Connor that in the future Connor and Brewster are married, and that it successfully killed Connor in 2032. Brewster then captured the Terminator and reprogrammed it to return to the past and protect them.

The Terminator saves Connor and Brewster from the T-X's attack, and the three visit the mausoleum where Sarah Connor is buried, after she died of leukemia 10 years ago. Inside the casket they find a weapons cache left by Sarah's friends as stipulated in her will, a backup in case Judgment Day was not averted. The T-X, impersonating Brewster's boyfriend, arrives shortly after the police and a battle ensues, but Connor and the Terminator steal a hearse and escape. They rescue Brewster from the T-X as it transforms from her fiancee back into a female shape, deterring it temporarily by hitting it with a rocket-propelled-grenade. A short distance away, the T-X pursues them on foot, cutting through the roof of the hearse, before they drive under a semi-truck trailer which scrapes off the roof and leaving the T-X behind. The Terminator has been programmed to take Connor and Brewster to a safe location so that they will survive Judgment Day, set to occur in a few hours.

Connor insists that they attempt to prevent Skynet from being activated. After the destruction of Cyberdyne Systems in Terminator 2: Judgment Day, the United States Air Force took over the Skynet project and it is being headed by Brewster's father, General Brewster. There are early indications of serious problems with the public cell, communications, Internet, and satellite transmissions, apparently in the form of a virus. T-X enters the secure facility disguised as a female airman unchecked by any security. She finds, activates and assumes control of several T1-2 cyborg hunter-killers. The civilians Terminator, Brewster, and Connor also enter the secure facility unopposed and arrive in the master control room too late to prevent her father and the military from activating Skynet. Brewster is ordered by his superiors to activate Skynet so it can eradicate the virus that has apparently infected the public network, satellite communications, and taken away their control of the military network.

When Brewster activates Skynet, it assumes control of the military's network, Minuteman missile system, and submarine missile systems, interrupting the human's control of the system just as the T-X arrives. The T-X in the form of Brewster's daugher enters the control room and is temporarily interrupted in its attempt to kill General Brewster by The Terminator, who shoots it with a machine gun. Before it can be stopped however it rises, transformed into its female shape. and shoots General Brewster, mortally wounding him. The Terminator repulses the T-X attack, firing repeated rounds from a Sage Control SL-6 Rotary Launcher, sending it down an elevator shaft. Connor asks the dying General for the supposed location of Skynet's system core. The General takes them to his office where the access codes are located in his safe. Enroute they are attacked by two T1-2 cyborgs which The Terminator defeats by detaching one unit's head and using its own GE M134 Minigun against the other unit.

General Brewster tells Conner to go to Crystal Peak, a hardened military base built into the Sierra Nevada mountains. The Terminator fights the T-X and tells Brewster and Connor to run to the plane and the runway. The T-X and The Terminator fight until the T-X defeats The Terminator, after which she reprograms him. As Connor and Brewster escape, they follow a particle accelerator towards the runway but they are attacked by cyborgs. Brewster suddenly seizes a AKMS Assault Pistol and destroys one of the robots. Enroute to the aircraft runway, the T-X attacks them. Connor turns on the particle accelerator and its massive electromagnetic energy attracts the T-X so strongly it cannot remove itself.

The Terminator reboots and reattaches its head, partially detached by the T-X. In the particle accelerator loop, the T-X appears to be disintegrating but manages to engage a electric saw and begin to cut through the accelerator shielding.

Connor and Brewster fly to Crystal Peak but shortly after they arrive the are attacked by the T-X who crash-lands a helicopter into the base's entrance tunnel. As they frantically try to open the blast doors, The Terminator, which had rebooted it's core functions, crash-lands a second helicopter and smashes the T-X under its wreckage. Even with its legs severed the T-X continues to pursue Connor and Brewster, but the Terminator traps it under a blast door and detonates its last remaining hydrogen fuel cell in the T-X's mouth, destroying them both.

Connor and Brewster prepare to detonate the C-4 they have brought with them only to discover that Crystal Peak does not house Skynet's core, but is rather a Cold War-era fallout shelter for high-ranking government officials. General Brewster sent them there to protect them from the impending nuclear holocaust initiated by Skynet. Skynetdoes not have a core but is distributed software that is located in the cloud on multiple networks and computers all over the world, allowing for redundancy and failure of independent programs, making it effectively impossible to shut down. Skynet begins a series of nuclear attacks on cities across the world, commencing Judgment Day. Soon after the attacks the equipment at Crystal Peak picks up transmissions from amateur radio operators and Montana's civil defense, to which Connor responds as the person in charge.