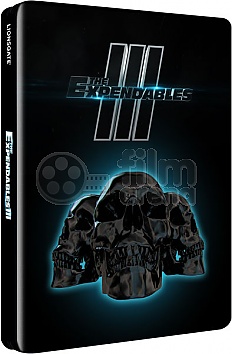 Barney (Stallone), Christmas (Statham) and the rest of the team comes face-to-face with Conrad Stonebanks (Gibson), who years ago co-founded The Expendables with Barney. Stonebanks subsequently became a ruthless arms trader and someone who Barney was forced to kill... or so he thought. Stonebanks, who eluded death once before, now is making it his mission to end The Expendables -- but Barney has other plans. Barney decides that he has to fight old blood with new blood, and brings in a new era of Expendables team members, recruiting individuals who are younger, faster and more tech-savvy. The latest mission becomes a clash of classic old-school style versus high-tech expertise in the Expendables' most personal battle yet.

An armored train is taking a fugitive to the Denzali prison. Hot on their trail are 'The Expendables', flying in a chopper piloted by leader Barney Ross (Sylvester Stallone). The gang has set up a wire a few miles down the track. Lee Christmas (Jason Statham), Gunner Jensen (Dolph Lundgren), and Toll Road (Randy Couture) start shooting at the guards, who fire back. The three of them hop on the roof and start fighting with the guards, when Christmas goes inside the train and retrieves the prisoner, a man they call Doctor Death (Wesley Snipes). Christmas frees him and tries to get him out, but Doc stops to stare at a portrait of a general. They get to the roof of the train again, but Doc has other plans. He runs to the front of the train, killing every guard in his path, and he steers the train directly into the prison, killing the general and blowing up the whole place.

Doc happens to be a former Expendable, as he tells Gunner and Road. He killed a whole mess of people, but he was imprisoned for tax evasion (an allusion to Wesley Snipes's legal problems). Gunner hands him his knife so that Doc can shave himself. He then walks to the cockpit to talk to Barney. Even though Doc is eager to go home, Barney informs him that he and the team need to locate an arms dealer named Victor Min, who is unloading a shipment of bombs. To persuade Doc to join, Barney hands him a bag of knives, which all belong to him. Doc is pleased.

The Expendables arrive in Somalia, meeting up with Hale Caesar (Terry Crews). Together, they sneak through the docks to find their target, shooting at the thugs they come across. They spot a chopper coming down, and out steps a man named Conrad Stonebanks (Mel Gibson). Barney and Doc are shocked to see him, as he was believed to have been dead, and they begin to open fire without warning. Stonebanks and the thugs fire back, leading to a chase through the docks and a warehouse. Road, Caesar, and Gunner shoot at the thugs, who chase them with bigger firearms, including a grenade launcher. The team manages to evade the pirates, but Stonebanks gets away on his chopper, flying over the warehouse. Stonebanks aims his rifle at Barney, but then moves to Caesar, shooting him in the leg and then in the back. He then drops a bomb down on them, forcing the team to jump into the river as the bomb goes off.

The team tries to tend to Caesar's wounds, but can't do much for him. They take him to the hospital, where Barney leaves him with his lucky ring. The rest of the guys go to a bar, where Barney decides he has to leave his friends behind so that they don't get hurt. He leaves the bar, with Christmas running off to convince him otherwise, but Barney's mind is made up.

Barney goes to Las Vegas to meet with an old friend, Bonaparte (Kelsey Grammer) with the intention of recruiting new, younger team members for The Expendables. Bonaparte agrees after learning that Stonebanks is alive. Their first stop is in Wyoming, where they meet Thorn (Glen Powell), who has good computer hacking skills. He is introduced when he is seen climbing rocks, and then jumps off with his parachute. Barney and Bonaparte then head to New York and go to a nightclub and meet the hostess, Luna (Ronda Rousey). Barney witnesses her in action when she beats the crap out of a few guys causing trouble. The next guy is named Galgo (Antonio Banderas), who faked his resume to get in. Bonaparte rejects him after hearing that his last team let him go, despite Galgo pleading and insisting he has exceptional combat and weapons skills. Barney and Bonaparte continue at an air base in California, meeting Mars (Victor Ortiz). He's good with weapons, and Barney instantly likes him. The last guy on their list is found fighting in Mexico. His name is John Smilee (Kellan Lutz). He's got a hothead attitude and doesn't care to listen to what Barney has to offer him, but then decides to join. Barney gathers the new recruits and shows them off to his old friends before departing with them to get Stonebanks. The old team sees the young guys (and lady) as amateurs.

Drummer informs Barney that the CIA wants Stonebanks alive for him to be tried in court at The Hague. With Trench, Barney flies with the young recruits to locate Stonebanks. Smilee asks Barney why they're hunting Stonebanks down. Barney hands him a folder that depicts the number of war crimes and atrocities committed by Stonebanks. The team drops down in Romania and spends time spying on Stonebanks during his trips to make art purchases, learning that he is planning to make a deal with another arms trader.

Thorn comes up with a carefully orchestrated plan in which the team would take out security and surveillance before getting Stonebanks, which is a better plan than what Barney would have come up with. The team infiltrates a warehouse where the trade is going down. They shoot through any thug standing in their way before they capture Stonebanks. They take him away in a van, where he admits to being rather surprised at the new team's work. It is revealed that Stonebanks was a co-founder of The Expendables with Barney, but he went bad after deciding he wasn't satisfied with the jobs he and Barney took on, deciding to make better money by doing dirty deeds. Stonebanks eggs Barney on to try and kill him, knowing he won't do it. Outside, his thugs come down from a helicopter and shoot a grenade at the van, causing it to crash and throwing everybody out of the van. Barney gets up and reaches for a gun to kill Stonebanks, but one of the thugs fires another grenade, throwing Barney off the bridge and down into the ravine. The thugs almost execute the rest of the team, but Stonebanks wants them alive.

Barney meets up with Trench and is shown a video sent by Stonebanks of Thorn, Mars, Luna, and Smilee all captured. He taunts Barney, knowing he will try to come and get them back. As Barney plots his rescue mission, he is found by Galgo, who somehow managed to locate him. Barney allows him to come along, and is then joined by Christmas, Road, Doc, and Gunner, since they are the only ones crazy enough to follow him into this mess. On their trip, Barney learns from Galgo that his team did not drop him, but they were killed on their last mission.

The team finds the building where the recruits are being kept. They find them and cut them loose easily, but as Conrad had anticipated this, he wires the whole place with C4 explosives to go off in 45 seconds. Thorn uses a battery-powered device to bug the signal, stopping the clock at 9 seconds. They head out to find Stonebanks, but Gunner and Road continue to antagonize the recruits. Barney tells them to shut up because this type of conflict is exactly what Stonebanks is expecting. They resolve to work together and fight back.

And so, another round of ass-kicking and gunfights occurs. From outside the building, Trench shoots from a helicopter with Drummer flying it, along with returning Expendable Yin Yang (Jet Li) shooting at the thugs as well. Smilee beats up some thugs and takes their motorcycle. Luna fights off and shoots thugs, impressing Galgo, who starts flirting with her. Even Galgo himself proves his worth by shooting thugs. Everybody else has their hand in killing every last man in the place. The Expendables and recruits make it out to the chopper (complete with Trench shouting the famous "GET TO DA CHOPPA" line). And then, it all comes down to Barney and Stonebanks, facing off for the last time. The two engage in hand-to-hand combat, before Barney manages to shoot Stonebanks dead for good.

The battery on the device drops to 0%, causing all the explosives to start going off. Barney races to the roof to catch the chopper, as the whole building starts blowing up beneath him. With mere seconds left, Barney hops off the roof and grabs onto the rope, and everyone cheers him on.

Later on, Caesar has made a full recovery and rejoins his friends at a bar. The four recruits are made official members of The Expendables, along with Galgo, who is ecstatic. Luna goes over to kiss Barney on the cheek for caring for them, and Smilee has a bit of banter going on with Barney, suggesting he may become the next leader. Barney tells him to keep dreaming. Christmas and Doc throw knives at the dartboard to see who's better. They both hit the bullseye, but Doc's knife falls off. The four recruits then go up onstage and sing karaoke to Neil Young's "Old Man". Barney watches them, which Christmas says looks like a "proud demented father." He jokes that it's a compliment.