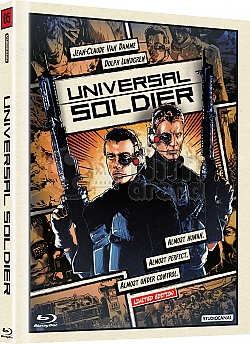 An elite team of soldiers has been used against terrorists where they use astounding physical capabilities to overcome them. Victoria, a reporter, follows them and discovers a part of their secret. When one of the team kills her cameraman she tries to escape. Luc, one of the soldiers begins to have flashbacks and turns sides and helps her as the remainder of the team follows to protect their secrets.

Near the end of the United States' involvement in the Vietnam War, an American military squad receives orders to secure a village against North Vietnamese forces. Pvt. Luc Deveraux (Jean-Claude Van Damme) comes to find the members of his squad and various villagers dead with their ears missing. His comrade in arms, Sgt. Andrew Scott (Dolph Lundgren) is the cause of this, having gone murderously insane. Deveraux finds that Scott, while holding up a string of severed ears, is also holding a young boy and girl hostage. Deveraux tries to reason with Scott, saying that the war is over. Scott becomes infuriated and shoots the boy in front of him, then orders Deveraux to shoot the girl in order to prove his loyalty.

Deveraux refuses and stops Scott from shooting the girl. The girl attempts to escape, but Scott throws a grenade at her, killing her. Luc and Scott shoot each other and both are killed. The next morning, a U.S. Special Forces squad finds their bodies. The commanding officer orders the bodies to be bagged and iced and to never discuss with anyone the truth of what really happened.

Jump to modern day in 1992, and terrorists have taken over the Hoover Dam. Bodies of several civilians were strewn over the dam's roadway, and dead police officers could be seen slumped near their police cars, apparent victims of a shoot out with the terrorists. Several surviving civilians were taken hostage, with one man shot dead as the terrorists press for their demands to be made.

Police agencies are ordered not to intervene or make any attempt to rescue the hostages. Instead, the Universal Soldiers (or "UniSols"), an elite counter terrorism unit, are called with Deveraux (now designated "GR44") and Scott (now designated "GR13") among this team. They apparently have been revived with no memory of their previous lives. Deveraux has flashbacks of his previous life, including a deleted scene in which he meets a Vietnamese bar girl at a Vietnamese bar called "LUCKY'S".

Deveraux and Scott are sent in to dispatch several of the terrorists, with Deveraux using efficient means, but Scott used excessive force. Their camera feeds sent back to the command post garners concern with the project technicians, suggesting that despite being emotional blank slates, Scott is actually enjoying it. As the UniSols infiltrate the area, they demonstrate their superior training and physical abilities, as one of them (Ralf Moeller as GR74) is shown surviving close-range automatic gunfire.

After the area is secure, Deveraux begins to regain memory from his former life after seeing two of the hostages who resemble the villagers he tried to save back in Vietnam. Turning around, he looks upon the face of Scott (who is also experiencing the same memory) but as a Unisol, he doesn't say anything. This causes him to ignore radio commands from the control team.

Back in the mobile command center, the Unisol technician team are trying to figure out what happened at the Hoover Dam incident. They reveal that the UniSols have enhanced healing abilities and superior strength but also have a tendency to overheat and shut down. It is also revealed that they are given a neural serum to keep their minds under control and their previous memories suppressed. All of the UniSols are then ordered to go back into their cooling units and inject themselves with the serum. Because of the glitch, Woodward (Leon Rippy), one of the technicians on the project, feels it may be better to remove Scott and Deveraux from the team until they can be further analysed. But Colonel Perry (Ed O'Ross), the commander in charge, tells them that the mission will proceed as planned.

TV news journalist Veronica Roberts (Ally Walker) is attempting to get a story on the UniSol project in an attempt to be reinstated at her job, having previously been fired while covering the Hoover Dam incident. After speaking with representatives from the project, she receives evasive answers. She later sneaks onto the base with a camera to investigate the project further only to discover the body of a damaged UniSol who appears to be fatally wounded but is still alive.

While attempting to escape, Deveraux and Scott are ordered to bring her back. She escapes to the car of her cameraman, but when the Unisols pursue, they cause the car to crash and overturn. Scott mercilessly executes the cameraman and Deveraux again intervenes, preventing him from shooting Roberts. They both escape in a UniSol vehicle.

After escaping, Scott mumbles to himself softly about Deveraux being a traitor, but none of the Unisol team realize it. Colonel Perry resolves to chase the reporter and Deveraux across country to prevent knowledge of the UniSols from getting out, not only to the public, but to the American government, as the nature of project is unknown by the Pentagon.

As Deveraux and Roberts hide out and attempt to get evidence of the UniSol program to the media, Roberts turns on the television to learn that she is now being framed for the murder of her cameraman. As the UniSol team is dispatched, Scott's previous personality begins to emerge, causing him to kill innocents. As the technicians realize what is happening, they attempt to stop him, only to be killed themselves. Scott then takes over the rest of the UniSol team.

Deveraux and Roberts travel around as Roberts tries to dig up more information about the UniSol program. They meet Dr. Gregor (Jerry Orbach) , the originator of the program, who reveals the history of the project. Deveraux learns more of his past and wants to go home to meet his family in Louisiana.

After Deveraux reunites with his family, Scott tracks them down and takes his family and Roberts hostage. A brutal fight ensues with Scott beating Deveraux mercilessly due to the muscle enhancers he has. Roberts manages to escape from her bonds only to be seemingly killed by a grenade thrown by Scott. Scott continues to dominate Deveraux until he gets a hold of the muscle enhancers Scott uses and injects himself with one. Deveraux starts fighting back due to his new strength and manages to impale Scott on the spikes of a meat grinder. Deveraux then finishes Scott by starting the machine up which grinds him up. Finally, Deveraux checks on Roberts who survived the explosion though wounded and the two embrace.

The Special Edition DVD release features an alternate ending which takes place shortly after Scott takes Deveraux's family and Roberts hostage. As Deveraux grabs a shotgun in the kitchen, the front door opens and he sees his mother before Scott shoots her to death. In the final fight between Deveraux and Scott, Deveraux does not use Scott's muscle enhancers. Shortly after grinding Scott to death, Deveraux is shot by his father before Dr. Gregor and his men appear. Dr. Gregor explains that he had Deveraux set up to get to him and Scott, and that Deveraux was living with people posing as his parents. He then has his men shoot down Deveraux. But before Deveraux dies, police and Roberts' news crew arrive. The news crew douse Deveraux with a fire extinguisher to stabilize him while Dr. Gregor and his men are arrested. Roberts is given the microphone to cover the arrest, but she loses all composure while on the air, dropping the microphone to comfort Deveraux.

Several days later, Deveraux is reunited with his real parents. The film ends with a eulogy narrated by Roberts, who explains that Deveraux rejected all life-prolonging medications before dying a natural death.