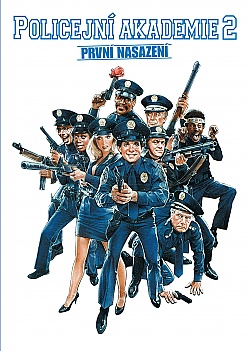 Mahoney and friends have graduated from the Police Academy (1984) and are issued with their first assignments. As before, their cheerfulness and devotion to duty outweighs any shortcomings, but are even they ready to do battle with a band graffiti daubing terrorists?

In this sequal to the first Police Academy movie, a nerdish storefront owner named Mr. Sweetchuck, is attacked and robbed of $8. by a local street gang known as "The Scullions" whom are led by the infantile Zed (Bobcat Goldthwait). After hearing about the incident, Chief Henry Hurst (George G. Robertson) arrives at the 16th precinct and notifies its captain, Pete Lassard (Howard Hesseman) that the precinct is the worst in the city for even old ladies throw things and spit at passing policemen on the street outside the station. Nevertheless, Hurst gives him 30 days or else Lassard is out. Before he leaves, the coniving Officer Mauser (Art Metrano) schemes his way into talking to Hurst. Hurst promises him the rank of captain should Lassard fail. Pete calls his brother, who happens to be Commandent Eric Lassard (George Gaynes) and asks him for six new recruits, as was promised by Hurst. Throughout the movie, Mauser is seen scheming with his dim-witted partner Sgt. Proctor (Lance Kinsey) as he attempts to take control of the precinct.

The recently graduated Carey Mahoney (Steve Guttenberg), Larvell Jones (Michael Winslow), Eugene Tackleberry (David Graf), Moses Hightower (Bubba Smith), Laverne Hooks (Marion Ramsey), and Douglas Fackler (Bruce Mahler) join the 16th precinct, and some are assigned a veteran officer partner since they're rookies: Fackler has Dooley (Ed Herihly), Mahoney has the overweight Vinnie Schtulman (Peter van Norden), and Tackleberry has Sgt. Kathleen Kirkland (Colleen Camp). At first, Tackleberry disapproves that his partner, Kirkland, carries stigmatized faults because of the fact she's a woman, but they later hit it off when they compare their preference of gun choices. Tackleberry later confides to Mahoney that he may have fallen in love with her.

Mahoney and Schtulman spot a robbery at a merchant's place called "Schewchuk's Lighting", a chandelier store owned by the nerd Mr. Sweetchuck (Tim Kazurinsky) (Zed's victim from the opening scene), but the robbers escape through a back door before Mahoney and Schtulman even enter the shop. Eventually Fackler, Tackleberry and Kirkland arrive, each one contributing in his own characteristic way to the destruction of the store.

Mauser is ready to suspend them, but Mahoney makes a passionate plea that convinces Lassard to give them another chance. While all this is going on, Zed and his gang go shopping in a supermarket. They cause havoc as they go, leaving the store with wagon-loads without paying. and Mr. Sweetchuck is already at hand in the supermarket to be further tormented this time by Zed and his group.

Mauser gives Mahoney a new assignment; patrolling a tunnel which is congested with traffic, and thus covering him and his partner with soot in the process. Mahoney gets revenge on Mauser by switching his shampoo with Tackleberry's epoxy resin solution, which glues his hands to his hair. He ends up embarrassing himself in front of the station by being tricked into leaving the locker room... fully nude. As a result Mauser has to wear a freakish red wig through the remainder of the film. On his morning drive to the station the next day, Pete Lassard spots some of Zed's men and tries to deal with them, but is eventually over-powered and spray-painted. After his rousing speech to finish what they started, the whole gang is riled up. Progress is made and most of the gang is captured (leading to 42 arrests), but Mauser informs the captain that most of the charges were dropped for brutality and lack of evidence. Mahoney sees that Mauser did this deliberately to discredit Captain Lassard. As revenge, Mahoney has a full body cavity search done on Mauser (the search was supposed to go to one of the arrested gangmembers).

Meanwhile, Tackleberry goes on a date with Kirkland, where they stay out late dancing. They profess their love for each other and have sex (but removing their numerous concealed weapons first before clothes).

Across town, Pete goes to see his brother Eric at a Japanese steakhouse, and Eric comes out with an idea to hold a fair. At the night of the fair though, Zed's men trash the place. As a result, Lassard is out of a job the next day, while Mauser is promoted Captain. His first act is to remove Mahoney and Schtulman, whom are quick to object to Mahoney's dismissal.

Mahoney, Schtulman, and Pete Lassard get together in an last-ditch attempt to stop the gang. They send in Mahoney undercover to find the leader of the gang. (Everybody at this point doesn't know Zed's name or that he is the gang leader.) Lassard and Schtulman wire Mahoney, using duct tape and a radio microphone. Under the guise of "Jughead," he is able to infiltrate the gang and find out both their hiding spot and the name of their leader. His cover is blown however due to the radio microphone cutting into a baseball game, which leads to Lassard calling every man to the location. Mauser intervenes, but takes Fackler through the air duct. However, Fackler accidentally bumps him and pushes him inside. The police arrive and arrest every gangmember there. Zed escapes with Mahoney, but Lassard arrives and prepares to shoot Zed with a loaded pistol. Mahoney punches him down a flight of stairs, while Hooks arrests him. It is then revealed that Lassard's gun wasn't loaded, as he "never carried live ammo since '73".

The movie ends with the officers attending Tackleberry and Kirkland's wedding. They drive off the Police Academy lot in a monster truck. At the same time a new group of police cadet misfits join the academy. Among them is the natural-born-geek Mr. Sweetchuck, and the "redeemed' Zed.