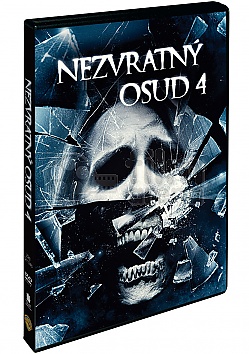 In a car race in McKinley Speedway, twenty-something Nick has a premonition of a deadly car crash with many casualties in the audience and convinces his girlfriend Lori and his friends Hunt and Janet to leave the place. They are followed by the security guard; a racist guy; a mother with her children and a mechanic, that are saved from death. When the racist guy and the mother die in mysterious and creepy incidents, Nick and Lori research and find many similar cases in Internet. They try to lure The Ripper to break the chain of deadly events and survive, but destiny does not help them.

Ten years after the explosion of Flight 180, Nick O'Bannon has a horrific premonition in which a bizarre sequence of events causes multiple race cars to crash at the McKinley Speedway race track, sending flaming debris into the stands, brutally killing his friends and causing the upper deck of the stands to collapse on him. When he comes out of this grisly nightmare Nick panics, persuading his girlfriend, Lori, and their friends, Janet and Hunt, to leave... escaping seconds before Nick's frightening vision becomes a terrible reality. Thinking they've cheated death, the group has a new lease on life, but unfortunately for Nick and Lori, it is only the beginning. As his premonitions continue and the crash survivors begin to die one-by-one--in increasingly gruesome ways--Nick must figure out how to cheat death once and for all before he, too, reaches his final destination. Nadia Monroy (Stephanie Honor) scolds the group for their actions, just when a tire flies out of the stadium and violently rips off her head and her left arm while the others look at her in horror.

Not long after a memorial for those who were lost, Carter attempts to burn a cross on George's front lawn because he blames George for stopping him from going back into the burning stadium to save Cynthia. His plan backfires and he is set on fire and violently dragged down the street by his tow truck. He is then blown up by the gas tanks in his car, and his blown off head lands next to George, who came out to see what is happening. The next day, Samantha is killed when a lawn mower rides over a rock thrown in its path by her sons, sending it flying through her eye. When Nick and Lori hear of the deaths they learn about the three previous disasters and realize that Death is back once again.

While Janet and Hunt refuse to believe so, Nick convinces George and Lori to help him conquer Death's plan. Andy is next, who is diced when a carbon dioxide tank throws him to a chainlink fence. Hunt and Janet are next, as they died at the same time in the premonition. Nick rushes to save Hunt at the pool, while Lori and George rush to save Janet. They succeed in saving Janet, but Nick fails to save Hunt, as his intestines are violently sucked into the pool drain.

George considers suicide due to causing the death of his wife and child but is unable to kill himself. This leads the survivors to believe that saving Janet has defeated Death. Nick decides to take Lori on holiday. Janet and Lori decide to go shopping and see a movie before they leave. Nick realizes it isn't over because there was another survivor, Jonathan Grove (Jackson Walker). In the mall and the theatre, Lori begins to see omens herself warning her that the danger is not over. Nick warns George about this, and they go to the hospital where Jonathan is located, but Jonathan is crushed by an overfilled bathtub over a collapsed ceiling. Outside the hospital, George is hit by an ambulance, leaving it up to Nick to save the girls. Nick arrives and pulls Lori from the cinema just before it explodes from a fire above, impaling Janet on the flying wreckage. Another explosion causes Lori to be crushed by an escalator. It is then revealed that the whole thing was another premonition. Nick fails to save George, but does save Lori and Janet by extinguishing the fire that would have caused the initial explosion.

Weeks later, the trio, thinking they have conquered Death's plan, celebrate surviving in a cafe. Nick notices a loose leg on a scaffold outside the cafe, and he tells a construction worker to fix it up. Once inside, he drifts off into thought after seeing omens around him and theorizes that his premonition of the mall disaster and the signs that came along with it were mere red herrings meant to lead the three where they needed to be to die. Just as Nick realizes this, the scaffold falls, and in order to avoid it, a truck swerves, and crashes through the cafe window (the film changes to X-ray vision), crushing Janet, decapitating Lori, and causing Nick to fly and hit the wall, thus breaking his jaw, leaving no survivors of McKinley Speedway.