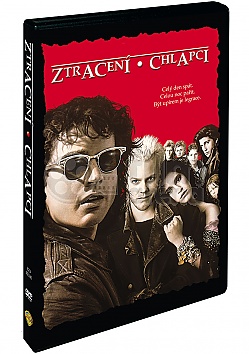 A mother and her two sons move to a small coast town in California. The town is plagued by bikers and some mysterious deaths. The younger boy makes friends with two other boys who claim to be vampire hunters while the older boy is drawn into the gang of bikers by a beautiful girl. The older boy starts sleeping days and staying out all night while the younger boy starts getting into trouble because of his friends' obsession.

Following the divorce of their parents, Micheal [Jason Patric] and Sam [Corey Haim] Emerson, along with their mother Lucy [Dianne Wiest], move to Santa Carla, California to live with their mother's father, a peculiar old man [Barnard Hughes]. Santa Carla happens to be the murder capital of the world. Santa Carla is a beach town with a boardwalk and the kids that hang out there, including a group of tough kids lead by David [Keifer Sutherland]. While Lucy gets a job working for Max [Edward Herrmann] at the local video store, Sam befriends the Frog Brothers, Edgar [Corey Feldman] and Alan [Jamison Newlander] who inform Sam that Santa Carla is crawling with vampires.

Meanwhile, Michael becomes enthralled by the mysterious and beautiful Star [Jami Gertz], who happens to be the girlfriend of David. David and his gang take Michael to their hideout, which is the remnants of an old hotel that collapsed during an earthquake. While there, Michael inadvertently drinks David's blood, thinking it is wine. Michael starts to develop some side effects - including sensitivity to sounds, a lack of reflection, and even flying. Sam accuses Michael of being a vampire but Michael convinces Sam that he can figure out how to fix it. Instead, Michael sleeps with Star. Sam decides to take matters into his own hands and asks for counsel from the Frog Brothers who promptly tell Sam that the only remedy is to drive a stake in Michael's heart but that Michael may only be a half-vampire, in which case, if the head vampire is killed, Micheal will go back to normal.

Meanwhile, Lucy begins to date Max and thinks that her boys are just having problems dealing with her dating after the divorce. Finally, Michael decides to take Star, along with a little half-vampire boy named Laddie Thompson [Chance Michael Corbitt], from David's clutches and brings Sam and the Frog Brothers with him to kill David and his gang while Michael grabs Star and Laddie. The inexperienced Frog Brothers manage to kill one vampire before waking the bunch and flee into the daylight. David smiles as the group escapes saying "tonight". Sam, Michael, and the Frog Brothers prepare for the night ahead. They prepare a bathtub full of garlic. They fill squirt guns with holy water. They prepare wooden stakes. Night falls and David and the remainder of his crowd come to Sam and Michael's house to seek vengeance. Sam and Michael take out one of the vampires by electricity and the Frog Brothers are saved by Sam & Michael's dog when the dog knocks a vampire into the bathtub with garlic. Finally, David and Michael face off. Michael kills David by pushing him onto some antlers. The only problem is that Michael doesn't go back to being human. David was not the head vampire.

Just then Lucy comes home with Max from a date. Unseen by Max, Michael and Star hide in the shadows as Max approaches the deceased David. Max appears to be upset by the death. It's then that it is revealed that Max is the head vampire and that David and his gang were Max's "children" of sorts. Max wanted David to make Michael and Sam part of the "family" so that Lucy would agree to being with Max knowing what he is. Max wanted Lucy because his boys were in need of a mother. Even though his boys are dead he still wants Lucy. Max takes hold of Sam, telling Lucy that Sam will die if she doesn't come to him. Just then Lucy's father busts into the house in his car equipped with wooden stakes. Max is killed and the day is saved. As Lucy makes sure her boys are okay, the grandfather goes to the kitchen, pops open a beer and says "There's one thing about living in Santa Carla...I never could stomach - all the damn vampires."