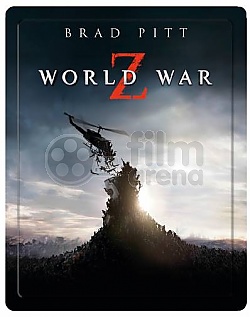 Life for former United Nations investigator Gerry Lane and his family seems content. Suddenly, the world is plagued by a mysterious infection turning whole human populations into rampaging mindless zombies. After barely escaping the chaos, Lane is persuaded to go on a mission to investigate this disease. What follows is a perilous trek around the world where Lane must brave horrific dangers and long odds to find answers before human civilization falls.

Former UN employee Gerry Lane (Brad Pitt), his wife Karin (Mireille Enos) and their two daughters wake and enjoy a family breakfast. Gerry tells the youngest daughter he quit his job to spend more time with the family. On the TV is some news about strife and talk of martial law. Later, they sit in heavy Philadelphia traffic when the city is attacked by a horde of zombies -- these attackers move very quickly, biting people and the bitten being turned very rapidly. The Lanes are in a car crash during the panic stampede and Gerry notices it takes approximately12 seconds for a bitten person to change.

As the chaos spreads, the Lanes escape from the city in a stolen RV trailer. They stop near Newark, New Jersey at a store where Karin stocks up on whatever food she can scrounge and Gerry is able to find medication for his daughter's asthma. His wife is attacked by looters -- Gerry shoots one of them and Karin is let go. Outside the store and take refuge in an apartment complex in Newark. Deputy Secretary-General Thierry Umutoni (Fana Mokoena) - an old friend of Gerry's - calls and tells the family that he is sending a helicopter to rescue them, however it will take until the next morning to arrive. The Lanes hide out in a small apartment with a Latino family. One of the children, a boy named Tomas, speaks English and translates for the Lanes. Gerry, believing that the best chance of survival is to keep moving, is unable to convince Tomas' family to leave with them. The Lanes creep through the mostly abandoned tenement trying to find the roof but the undead detect them and they are chased to the roof. They find Tomas on the way. When Gerry is attacked by several zombies, they spew blood on him. Arriving on the roof, Gerry steps to the edge, ready to throw himself off if the blood spilled on his face makes him turn. He doesn't and, after holding off another horde of the undead, the family boards the chopper and escapes. The helicopter takes the Lanes to a U.S. Navy aircraft carrier off the coast of New York City, where a team of scientists and military personnel are analyzing the scope of the worldwide outbreak. Thierry is waiting there for them and fixes them up with bunks.

A virologist, Dr. Andrew Fassbach (Elyes Gabel), argues that the plague is a virus, whose origin must be found in order for a vaccine to be developed. Because of his expertise as a former UN investigator, Gerry is tasked with helping Fassbach find the outbreak's source. Gerry reluctantly agrees to help, on given the word that his family will be safe, and is sent to Camp Humphreys, a military base in South Korea, where an email was received about 11 days prior that stated that the outbreak may have started there.

Moments after arriving at the base, Gerry's team is attacked by zombies. Fassbach is killed after accidentally shooting himself. After being rescued by the base's surviving personnel, Gerry learns that the zombies are attracted to noise. The soldiers on the base, lead by Captain Speke, explain that a Korean soldier had been out in the field doing research when he was attacked and turned. His conversion took considerably more time than what had been witnessed more recently. The corpse of the infected man attacked the base doctor & both were incinerated. Speke tells Gerry how one of his men was able to stand in the middle of the infected people and not be attacked. When Gerry asks the soldier, who walks with a slight limp, how he injured his leg, the soldier tells him something's been bothering him lately.

Gerry talks to a Ex-CIA agent, Haffner (David Morse), who'd been arrested for selling arms to North Korea. He tells Gerry a chilling account of how the North Korea government was able to contain the outbreak by pulling the teeth of every citizen within a 24 hour period, giving citizens no way to infect each other through bites.

Haffner tells Gerry to go to Jerusalem, where the Israeli Mossad had established a safe zone just before the outbreak was officially acknowledged, implying Israel might have had prior knowledge of what was to come. To get the C130 refueled and Gerry aboard, the Speke's men ride in a fleet of bicycles to avoid making any noise. Gerry's satellite phone goes off when Karin tries to call him and the undead attack. The plane is refueled successfully and Gerry and the C130 pilot manage to escape.

In Jerusalem, Gerry meets Mossad leader Jurgen Warmbrunn (Ludi Boeken), who explains that the Mossad had months earlier intercepted communications from an Army General in India, who stated that Indian troops were fighting the "rakshasa", or "dead spirits". Warmbrunn also explains how the center of Jerusalem was walled in -- the wall is formidable, at least 50 feet high and refugees are being brought in to the quarantine zone, including non-Jews and Muslims. While Gerry talks with Jurgen, a group of Muslim refugees begin to sing joyously at finding a safe zone to survive in. One of the women is able to find a microphone and the singing grows louder. The zombies outside begin to climb the protective wall forming a massive pile that eventually succeeds in entering the city. While fleeing, Gerry notices that an old man and an emaciated boy are ignored by the zombies. A young Israeli woman, Segen (Daniella Kertesz), Gerry's escort, is bitten by a zombie. Gerry quickly amputates her hand to stop the spread of the infection, counting to 12 until he's sure that she won't turn. Gerry and Segen eventually manage to board a Belarus Airways airliner after Gerry's pilot panics and flies away.

Contacting Thierry, Gerry asks for the nearest WHO or CDC type lab, they are diverted to a WHO research facility in Cardiff, Wales. While in the air, a stowaway zombie is released from the cargo hold and attacks a flight attendant. She attacks the rest of the passengers. The plane crashes near Cardiff after Gerry detonates a grenade to kill the zombies. Segen and Gerry proceed as the only apparent survivors of the crash, Gerry has been impaled by a chunk of metal. Segen finds him and they walk to Cardiff and find the WHO facility. Out of contact, the US Navy assumes he is dead and deports his family to Nova Scotia.

After arriving at the facility, Gerry passes out at the gate and awakes three days later strapped to a gurney -- his wound has been treated and bandaged. He is able to convince the staff of the facility that he's there on a specific mission -- the men watching him call his wife's satellite phone. Thierry answers the phone and tells Gerry that his family were considered "non-essential" personnel & were relocated to a land-based facility. Gerry is upset but Thierry is able to verify Gerry's identity to the suspicious WHO staff.

Gerry reveals a theory to the wary scientists that since the old man and the sickly boy in Jerusalem were ignored, the infected do not bite people who are seriously injured or already terminally ill, since they would be unsuitable as hosts for viral reproduction. He volunteers to inject himself with a terminal but curable pathogen to see if his idea works. However, the wing of the building in which the pathogens are stored was overrun by zombies after a doctor accidentally infected himself. Gerry decides to go get a pathogen regardless, while Segen and one of the WHO doctors follow him for backup. They fight their way through the zombies, and Gerry finally gets to the pathogen vault.

Inside, Gerry fills a small box with vials of pathogens from two separate cabinets. The scientists watch him on camera, remarking that the left cabinet contains deadly and incurable diseases. Gerry gets ready to leave and sees one of the undead doctors outside. Cornered and without a suitable weapon, he decides to inject himself to see if his theory will work. He shows the scientists a note saying "TELL MY FAMILY I LOVE THEM" and chooses a vial at random from the box. Gerry waits a short time and opens the door to the vault. The former doctor ignores him and Gerry is able to walk out, past the horde of zombies that have infested the facility.

After he makes it back to the safe part of the facility, everyone rejoices at his theory's success, and the doctors cure him of the pathogen. Gerry returns to his family, in a safe zone in Freeport, Nova Scotia.

A "vaccine" derived from deadly pathogens is developed that can act as camouflage for the troops battling the infected. Air drops are performed, delivering the pathogen to all parts of the world. Human offensives begin against the zombies, and hope is restored. Russia is particularly successful in halting the pandemic with military and civilian force. Gerry comments, "This isn't the end. Not even close."

Copyright © 2021 filmarena.cz | Created by: tvorba webových stránek
We have 7549 products for you.