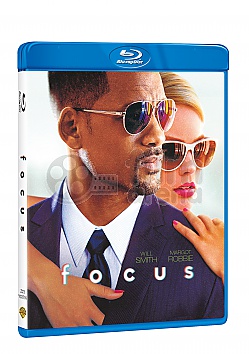 Nicky Spurgeon is an extremely accomplished con man who takes an amateur con artist, Jess, under his wing. Nicky and Jess become romantically involved, and with Nicky's profession of being a liar and a cheater for a living, he realizes that deception and love are things that don't go together. They split, only to see each other three years later... And things get messy.

Con man Nicky Spurgeon (Will Smith) goes to a bar in New York City. There, he sees a beautiful young blonde woman (Margot Robbie) with another man. She leaves the man as he slowly passes out drunk, and she goes to Nicky's table. Her name is Jess. They go upstairs to her hotel room and start to make out. A man then bursts into the room with a gun, threatening to shoot Nicky. Jess says he's her husband. Nicky then quips that he's got cancer, and the man says he doesn't want to shoot a guy with cancer. Jess figures that Nicky is on to them. Nicky says how they should have handled it if they really wanted to rob him before he leaves.

Jess finds Nicky a few nights later and begs him to teach her his ways after she's done her research on him. Nicky mentioned a story to her about two partners involved in a con where one partner had to shoot the other. They happened to be Nicky's father and grandfather, and the former shot the latter. Nicky agrees to teach her and says the act of conning people is a game of focus. He shows her how her works his hands so that she can't tell when he's swiped something off her person.

Nicky takes his business to New Orleans with his friend Horst (Brennan Brown), and their own team of con artists. Jess joins them down there for a practice round of conning. They take her through the crowded streets where they swipe watches, wallets, and other trinkets off unsuspecting people. They also take Jess through a hotel casino for another round. After she proves her worth, she is allowed on the team.

Jess meets Nicky's friend and associate Farhad (Adrian Martinez). He is involved in more complicated schemes, as he is seen removing a fake ATM that is used to nab private information. Jess takes a liking to Farhad despite his often crass behavior.

Over time, Nicky and Jess develop a mutual attraction. After sex, Jess asks Nicky why some people refer to him as "Mellow". He says his father used to call him that because he told him he was soft like a marshmallow. Nicky believes that there's no room for heart in this game because it can get you killed.

Nicky and Jess go to a football game. They make small bets with each other such as if one fan will catch a hot dog, and if another is too drunk to get up for the wave. They see a woman in short shorts and bet how many men will look at her ass as she walks by. Jess bets 8 while Nicky bets 3. A curious man named Mr. Liuyan (B.D. Wong) joins the game and bets 5. Seven men check out the woman as she walks by, making Jess the closest. Liuyan makes more bets with Nicky over the game, practically begging him to play when Nicky tries to back out. Nicky plays and loses $1,000. The bets escalate as the two men double the bets, even as Jess tells Nicky they should just leave. Just when it looks like he's about to lose it all, Nicky bets all of his money, including Jess's, which amounts to about $1.1 million, for a quick card game. Liuyan pulls the card with a higher number, winning all their money. Nicky chooses not to walk away and decides to double the bet if Liuyan picks any player on the field and he makes Jess pick the one that Liuyan spotted. Liuyan gives them a chance to back out, but Nicky makes Jess pick. Jess grabs a pair of binoculars and looks carefully through the field before spotting Farhad wearing a jersey with 55 on it. She picks him, and to everyone's surprise, that's the correct answer.

On the taxi ride home, Nicky, now with a LOT of money on him, explains to Jess that this was set up from the beginning of the day. He knew that Liyuan is a notorious gambler, so he had it set up so that Liuyan would see the number 55 throughout the day, thereby subconsciously getting him to pick that number when the moment was right. Nicky then has the taxi pull over while another car pulls up behind them. He tells the cabbie to take Jess to the airport. He leaves her with her share of money and departs without another word, leaving Jess confused and heartbroken.

In Buenos Aires, Argentina, Nicky is working with a racer and billionaire named Rafael Garriga (Rodrigo Santoro) and his associate Owens (Gerald McRaney). They plan to sell a software system developed by Garriga to an Australian investor named McEwen (Robert Taylor), though it's obvious Nicky is really planning to swindle Garriga.

Nicky goes to a party at Garriga's mansion where he sees Jess for the first time since he left her, descending the staircase in a stunning red dress. She kisses Garriga, to Nicky's disdain. He approaches Jess afterward, where she assures him that she's doing just fine on her own.

Nicky spends a lot of his time trying to get closer to Jess, even though she's done with him. This eventually leads to them going back to Nicky's hotel room and having sex. The next morning, Owens goes to Nicky's room while Jess stays out of sight. Owens complains about his feelings toward the younger generation and his lack of progress in the job.

Nicky eventually sells off Garriga's software not only to McEwen, but to numerous investors for the same price, amounting to about 27 million Euros. He even gets Jess to go with him. One of Garriga's men rams his car into theirs one night, and the two of them are abducted and taken to one of Garriga's warehouses with duct tape on their mouths. He takes the tape off Nicky's mouth but leaves it on Jess and plugs her nose until Nicky tells him how he managed to con Garriga. Nicky explains his angle and adds that Jess was not part of the plan so that Garriga can release her. He takes the tape off her mouth and she admits to Nicky that Garriga isn't her boyfriend - she just wanted his watch, which is worth two grand. Nicky then gets shot in the chest by Owens, which horrifies Garriga and causes him to leave. Nicky appears to bleed out as Jess cries and tells him she loves him. It looks like Nicky dies until Owens says he shot Nicky in the right spot to avoid any major arteries, although he did puncture his lung. Owens gets the blood out of Nicky's lung, reviving him. Owens then calls Nicky "Mellow", making Jess realize that Owens is Nicky's father, Bucky Spurgeon, and that he was in on the con the whole time.

Owens drives Nicky and Jess close to the hospital. He reminds Nicky of what he said regarding putting your heart in the con game, and adds that he's taking the money. Jess helps walk Nicky to the front of the hospital. Nicky then notices that Jess is wearing Garriga's watch on her wrist.