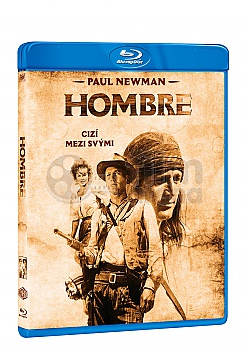 John 'Hombre' Russell is a white man raised by the Apaches on an Indian reservation and later by a white man in town. As an adult he prefers to live on the reservation. He is informed that he has inherited a lodging-house in the town. He goes to the town and decides to trade the place for a herd. He has to go to another city.

The only stagecoach is one being hired for a special trip paid by Faver and his wife Audra. As there are several seats others join the stagecoach making seven very different passengers in all. During the journey they are robbed. With the leadership of John Russell they escape with little water and the money that the bandits want. They are pursued by the bandits. As they try to evade the bandits they reveal their true nature in a life threatening situation.

John "Hombre" Russell (Paul Newman) patiently waits for a black stallion to lead its herd to a waterhole so he can trap the herd. He and his San Carlos Apache tribesmen will sell the horses to a local stagecoach line. Henry Mendez (Martin Balsam) tells John the stagecoach line is shutting down because of the railroad and urges John to return to his White Man's roots and take over a boarding house left to John by his deceased stepfather.

John inspects the boarding house and tells the landlady, Jessie (Diane Cilento), that he intends to sell the place and head to Bisbee, Arizona. Alex Favor (Fredric March) and his wife, Audra (Barbara Rush) shows up in town and charters one last stagecoach to Bisbee. Cicero Grimes (Richard Boone) bullies his way onto the passenger list to accompany John, Jessie and the Blakes.

Henry is the stagecoach driver and decides to take the back road to Bisbee because of a suspicious group of men in the area. John is asked to ride on top with Henry when Alex finds out John is a White Man raised as an Apache.

Bandits hold up the stagecoach and Cicero is their leader. They take Audra and thousands of dollars from Alex, who embezzled the money from the San Carlos Apache tribe. As the bandits leave, John kills two of them and recovers the saddlebag of cash. John and the passengers head back to town through the mountains. They stop at an abandoned mining site and rest in a shack on a hill.

The bandits show up at the mine and Cicero offers to trade Audra for the cash. John shoots Cicero during the negotiation. A bandit ties up Audra, leaving her in the hot sun to die. Audra begs for help and the passengers want to trade the money, but no one is brave enough to go down the hill, except for Jessie. John stops Jessie, gives the cash to a passenger with instructions to return it to the San Carlos Apache tribe. John heads downhill with the saddlebags. John cuts Audra loose. She heads up the hill, blocking a clear shot of the bandit from the shack. The wounded Cicero confronts John and discovers the saddlebag is empty. Cicero, John and the bandit blaze away and all three are killed.