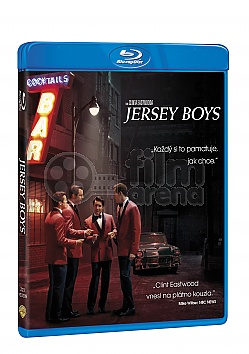 Jersey Boys is a musical biography of the Four Seasons-the rise, the tough times and personal clashes, and the ultimate triumph of a group of friends whose music became symbolic of a generation. Far from a mere tribute concert (though it does include numbers from the popular Four Seasons songbook), Jersey Boys gets to the heart of the relationships at the center of the group-with a special focus on frontman Frankie Valli, the small kid with the big falsetto. In addition to following the quartet's coming of age as performers, the core of the show is how an allegiance to a code of honor learned in the streets of their native New Jersey got them through a multitude of challenges: gambling debts, Mafia threats and family disasters. Jersey Boys is a glimpse at the people behind a sound that has managed to endure for over four decades in the hearts of the public.

Tommy DeVito (Vincent Piazza) walks in to tell the audience that he's the one to go to for the real story. He claims that if it wasn't for him, he and his friends would have wound up in someone's trunk with a bullet in their heads. He goes over to the barbershop to meet with his friend Frankie Castelluccio (John Lloyd Young), performing his first shave on Gyp DeCarlo (Christopher Walken), a mob man that is known to take care of business for Frankie and his friends. Tommy's surprise entrance startles Frankie and he accidentally nicks Gyp's cheek, but he brushes it off.

After Tommy drops Gyp off, he goes to Frankie's home after he has dinner with his parents. His mother doesn't like the type of friends Frankie is hanging out with. Tommy takes him out, saying they're going to practice for something at the high school, when in reality they, along with Tommy's brother Nicky (Johnny Cannizzaro), are stealing a vault. The DeVitos try hauling it into Frankie's car, but it is far too heavy. Frankie tries to drive the car with the vault weighing it down, and he ends up crashing through the window of a store. The three boys hightail it out of there.

Tommy, Nicky, and their friend Nick Massi (Michael Lomenda) play at a club as The Variety Trio. Tommy invites Frankie up onstage to sing. His falsetto voice catches the attention of a pretty redhead in the audience. Backstage, Tommy tells Frankie there are two types of women out there - Type A, which will immediately jump into bed with a man and then break his balls, and Type B, which will need to be wined and dined before breaking any balls. Frankie decides to pick up the redhead and take her out, only to be stopped by the police for the attempted robbery.

Frankie, Tommy, and Nicky are taken to court. Frankie's parents order Tommy to stay away from their son, and he is sent to six months at a correctional facility. He is welcomed back pleasantly.

Nick brings Frankie and a date to break into a church. They get to the organ and start singing a tune together, which the nun in the church hears. She brings in a cop, who arrests Nick. Just as Tommy is getting out, Nick is going in.

A while later, when nobody is in prison, the boys play at the club again. Frankie spots a gorgeous girl named Mary Delgado (Renee Marino), who is with another man. Though Tommy warns Frankie about her, Frankie tells him to find a way to get rid of her boyfriend. Tommy gets the bartender to get him out, leaving Frankie room to talk to her. They go have dinner together, where Frankie says he's changed his last name to Vally. Mary tells him that it should be with an "I" since he's Italian and because "Y" is a useless letter ("Is it a vowel or a consonant?"). She takes him to bed, and not long after, the two are married.

Frankie is later driving in his car with two goons named Stosh (James Madio) and Donnie (Jeremy Luke). The two of them get into an argument that ends with Donnie supposedly shooting Stosh in the head and killing him. A freaked-out Frankie is told to run out, while Stosh sits up, laughing. Frankie runs to Tommy about this. Tommy says it's a scam so that they can collect money to make it go away. Otherwise, in a real shooting, all the witnesses would be killed. The boys go to Gyp to make this go away, and he tells Stosh and Donnie to never go near Frankie again.

With Nicky out of the group (now called The Four Lovers), Tommy learns from his good friend Joey Pesci (Joseph Russo) about a singer-songwriter named Bob Gaudio (Erich Bergen), who had a hit with the song "Short Shorts". They bring in Bob to check the band perform at the club, where he hears Frankie singing, and he declares to the audience (he's taken over the narration) that he must write for this voice. Bob shows the boys a piece of music he wrote, "Cry For Me", which they all begin to perform in front of the waitresses, who are attracted to Bob. Tommy sends them away and tries to negotiate with Bob and Frankie in regards to letting Bob in. Bob wants a four-way split, which Tommy is not cool with. Frankie is fine with it and threatens to leave the group if Tommy doesn't agree. He relents and lets Bob join.

The boys try to send their demos to publishers, with nobody interested in listening to them as they go to the studio. Frankie and Bob run into an old friend of Frankie's, the flamboyant Bob Crewe (Mike Doyle), who takes them to a party and later signs them for a contract. After a year, however, Bob realizes the group is just doing backup vocals for other musicians. Crewe tells them that they don't have a unique name or sound just yet.

The boys try to play at the bowling alley, but the manager (Billy Gardell) sends them out since he recognizes Tommy for fixing the pins on games. Outside, the neon sign lights up, with the bowling alley's name, Four Seasons, inspiring the boys to name their group after that. Bob then writes a new piece of music, "Sherry", which they sing for Crewe over the phone. Crewe, enchanted by Frankie's voice, tells his assistant to double Frankie's sound.

Soon, the radio cannot stop playing "Sherry", and The Four Seasons become sensational. Their next two singles, "Big Girls Don't Cry" and "Walk Like a Man" hit #1. The boys start enjoying their lavish lifestyles, with Tommy bringing in a girl to help Bob get laid. However, the constant touring and cavorting with women leads Mary to think Frankie is unfaithful, so she kicks him out. He shares one last night with his daughter Francine (Elizabeth Hunter), before leaving the next morning and saying goodbye to his other two daughters.

Trouble begins to stir when the boys perform on The Ed Sullivan Show. Frankie is approached by a loan shark named Norman Waxman (Donnie Kehr), who says that Tommy owes him $150,000. As they play the show, Nick (now the narrator) tells the audience that trouble started long before this.

Two years earlier, as the boys play at the Ohio State Fair, they are arrested after they learn that Tommy defrauded a hotel they stayed at, owing them $120. Frankie's faith in Tommy dwindles, and it only gets worse after they are both interviewed by a pretty reporter named Lorraine (Erica Piccininni). Frankie meets with her first and starts a relationship with her, and after she meets Tommy, he hits on her, infuriating Frankie. He stops talking to Tommy, which the latter can't understand, as he feels he's been good to him. Though Nick tells the audience that if you think Frankie would have cut Tommy loose then and there, you're not from Jersey.

The boys meet with their lawyer so that the money-handling can be transferred to Bob. In a fit of rage, Tommy smashes a chair on the desk. In the present time, Frankie goes to Gyp for help with Tommy's debt. Moved by his devotion to his friend, Gyp doesn't take Frankie's money and says he'll see what he can do. Together, the boys, along with Gyp and Waxman gather and discuss Tommy's debts, which go further when Tommy admits he took money from their tax account, amounting to about half a million. Frankie says the band will pay off the debt together. Nick, having had enough of Tommy's shit, quits the group. It is then decided that Tommy will be sent to Vegas for the mob to keep an eye out on him.

With only Frankie and Bob left, the two struggle to find gigs to play, as well as making money to pay off the debts. Frankie receives a phone call from Mary, prompting him to return to Jersey. He learns that Francine (now played by Freya Tingley) has run off to the city. She is brought back by one of Frankie's friends. Frankie meets Francine at a restaurant and encourages her to become a singer, with Crewe being able to sign her. After a while, Frankie and Bob finally pay off the debts to Waxman. Frankie receives his weekly phone call from Francine, only to find that it's a policeman answering, telling him that Francine has died from an apparent overdose. Distraught, Frankie is reluctant to play anymore songs that Bob has written.

Following Francine's death, Frankie gets back to singing, starting with "Can't Take My Eyes Off You". It starts off slow, and then builds into a bigger song, which he plays to amused crowds.

Fast forward to 1990 at the Rock and Roll Hall of Fame. Frankie, Bob, and Nick have reunited. Tommy makes a surprise appearance and reconciles with Frankie. They perform "Sherry", during which each of them give testimonies. Tommy now works for Joe Pesci. Nick explains his leaving the group as a moment of pride and a desire to go home. Frankie says he'll never forget how his experience with the guys started. Bob says he doesn't care where people thinks he came from, and that he's happy to live in Nashville with his wife. We then see the boys in their younger selves performing "Who Loves You".

The film ends with the entire cast performing "December 1963 (Oh What A Night)".