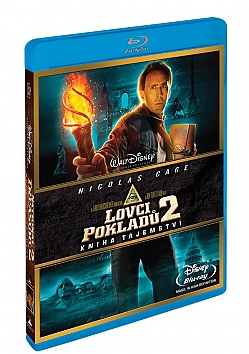 99 CZK
With this product you can buy even more products from this category MULTIBUY Blu-Ray and save 50%!
QuestionReferenceOrder

While Ben Gates is presenting new information about John Wilkes Booth and the 18 pages missing from Booth's diary, a man by the name of Mitch Wilkinson stands up and presents a missing page of John Wilkes Booth's diary. Thomas Gates, Ben's great-grandfather, is mentioned on the page. It shows that Ben's great-grandfather was a co-conspirator in Abraham Lincoln's murder. When doing more research, the conspiracy takes Ben, Abigail Chase, and Riley Poole to Buckingham Palace (which they break into). They discover a plank that has early Native American writing on it. The plank has only one symbol that Patrick Gates can identify. The symbol is Cibola (see-bowl-uh) meaning the City of Gold. In order to define the rest they have to go to Ben's mother, Patrick's divorced wife. After 32 years it brings back old arguments. After that the other clue is in the President's desk in the Oval Office in the White House (which Ben and Abigail sneak into) to discover that the clue lies in The President's Book. But in order to see the book, their choice is either get elected president or kidnap the President of the United States. Which do they choose? It's obvious. With Wilkinson close on their tail, they find the book in the Library of Congress. The conspiracy then crosses to Mount Rushmore where the clue was on the hills, but (according to the Book) President Calvin Coolidge had the faces carved in so no one can find the City of Gold. When they get there they find out that they must work with Wilkinson since he has some clues of his own. Who will claim Cibola? And will the name of Gates be known as murder?

When a missing page from the diary of John Wilkes Booth surfaces, Bens great-great grandfather is suddenly implicated as a key conspirator in Abraham Lincolns death. Determined to prove his ancestors innocence, Ben follows an international chain of clues that takes him on a chase from Paris to London and ultimately back to America. This journey leads Ben and his crew not only to surprising revelations but to the trail of the worlds most treasured secrets.

Five days after the end of the Civil War, John Wilkes Booth and Michael O'Laughlen, both members of the Knights of the Golden Circle (KGC), enter a tavern and approach Thomas Gates (Ben Gates' great-great-grandfather), a well-known puzzle solver, to decode a message written in Booth's diary. Thomas recognizes the message and begins to translate it. While he does so, Booth leaves for Ford's Theatre to assassinate President Abraham Lincoln. Thomas solves the puzzle, a clue to a map to Cibola, the city of gold, and realizes the men are still loyal to the South and have a sinister motive for finding the treasure. A fight breaks out, and Thomas rips several pages from the diary and throws them in the fireplace. Thomas is shot, and the gunman attempts to retrieve the pages, but only obtains a page fragment. As Thomas dies, Thomas tells his distraught son, Charles Gates, "The debt that all men pay..."

Over 140 years later, Ben Gates (Nicolas Cage) is telling his great-great-grandfather's story at a Civilian Heroes conference. Black market dealer Mitch Wilkinson (Ed Harris), a Virginia Military Institute graduate, shows one of the 18 missing pages of John Wilkes Booth's diary, with Thomas Gates' name on it, convincing everyone that Thomas was not only a conspirator, but the grand architect of the Lincoln assassination, which tarnishes the Gates family's reputation and Ben is disgraced. Refusing to allow his ancestor's name to be tarnished, Ben sets out to prove the innocence of his great-great-grandfather. Ben discovers a cipher pointing to douard Laboulaye hidden on the back of the diary page. He travels to Paris, France, where he finds a clue engraved on the torch of the scale model of the Statue of Liberty on the le des Cygnes, referring to the two Resolute desks. Ben then heads to England to look at the desk at Buckingham Palace with the help of his friend Riley Poole (Justin Bartha) and estranged girlfriend, Abigail Chase (Diane Kruger) (His relationship with Abigail having soured due to him constantly predicting what she might want without even bothering to ask her, even if he is often correct in his assumptions). From the Queen's desk, he obtains an ancient wooden plank with ancient symbols carved into it.

Meanwhile, Wilkinson breaks into Patrick Gates' (Jon Voight) house and clones Patrick's cell phone in order to track Ben's whereabouts. Wilkinson eventually obtains the wooden plank, but not before Ben manages to photograph the symbols carved into the plank. At Ben's insistence, Patrick reluctantly asks his ex-wife and Ben's mother, Dr. Emily Appleton (Helen Mirren) for help in translating the symbols. She does so, but points out that some of the glyphs are partial, leading Ben to conclude another plank must be hidden in the other Resolute desk located in the Oval Office. Ben and Abigail coax Abigail's new love interest, Connor (Ty Burrell), who works at the White House, into letting them into the office to see the desk. Ben discovers that the second plank is missing, but he does find a stamp bearing the seal of the Book of Secrets. Riley tells Ben that the Book of Secrets contains documents collected by Presidents for Presidents' eyes only, covering such controversial subjects as the eighteen minutes erased from Watergate tapes, Area 51, and the assassination of John F. Kennedy.

After he and his family set the situation up so that all other hotels where the party might take place are fully booked, Ben crashes the president's birthday party at Mount Vernon, where he meets the president (Bruce Greenwood). After showing him a map of Mt. Vernon drawn by George Washington, Ben convinces the president to follow him into a secret tunnel under the House where he confronts him about the book; the president sympathetically warns Ben that his actions will be interpreted as an attempt to kidnap the president, confirming a conclusion Ben and his companions have already reached; Ben is now wanted for committing a federal offense. Ben convinces the president to reveal the location of the book, which is at the Library of Congress. The President also tells Ben to read page 47 along with the information he needs.Shooting of the film in London

In the book, Ben finds a picture of the missing plank from the desk and an entry by President Coolidge, who found the plank in 1924, had it destroyed, and commissioned Gutzon Borglum to carve Mount Rushmore to erase the map's landmarks in order to protect the treasure. Ben, Riley, Abigail, and Patrick head to Mount Rushmore where they meet Wilkinson, who has kidnapped Ben's mother. He helps them find the entrance of a cave containing the legendary Native American city of gold, Cbola. Once inside, they encounter several traps, and Ben, Abigail, Riley, and Wilkinson get separated from Ben's parents. Eventually, they find the city of gold behind Mount Rushmore. However, in order to leave the city of gold when it suddenly begins flooding, one person has to stay behind to hold open the stone door to the drainage tunnel beneath the city, an action which would result in certain death. Wilkinson demands to go first by threatening Abigail, so Ben agrees to stay behind. However the pounding of waves causes Wilkinson to be the one to stay behind, where he drowns in the cavern beneath the city.

Ben clears his family's name with the discovery and is cleared of all charges when the president tells everyone that Ben did not kidnap him, but actually saved his life when the secret passage they were looking at was accidentally activated. Everyone including Wilkinson is given credit for the discovery of the Lost City of Gold. The president then asks Ben about what he read on page 47 of the Book of Secrets, to which Ben replies, "It's life-altering, sir."

The last scene shows Riley walking down the street when he sees his towed car. He jumps in, and discovers a letter from the president. The back says "Tax Free." Riley reverses, and crashes.