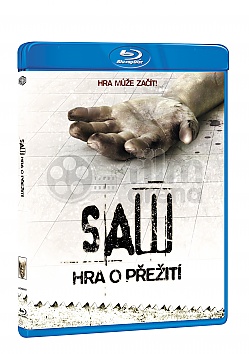 Two men wake up at opposite sides of a dirty, disused bathroom, chained by their ankles to pipes. Between them lies a dead man loosely clutching a hand-held tape player and a handgun. Each finds a tape the perfect fit for the player in their back pocket. They play the tapes. One is threatened, the other isn't. But they have a task: One must kill the other by 6:00, or his wife and daughter will die. They find hacksaws in a toilet, and try to cut the chains, but it doesn't work. They are the two newest victims of the Jigsaw Killer. In a flashback, we learn of Amanda, a girl who falls victim to the Jigsaw Killer. On her head is a mask, which is hooked into her lower jaw. There is a timer on it. Only one key will unlock it, and that key is in the digestive tract of her cell mate who lies paralyzed on the opposite side of the room. If she doesn't unlock the mask in time, her lower jaw will be ripped wide open. She survives, but her cell mate doesn't. Through a series of flashbacks, we learn of more victims, and of the nearly-successful capture of the Jigsaw Killer, who doesn't actually kill his victims. Instead, he finds ways to make them kill either themselves, or each other, and he thinks the entire 'game' out perfectly, with no other ways out. Or so it would seem.

The film begins with photographer Adam Faulkner (Leigh Whannell) waking up in a bathtub filled with water. In his instinctive flailing, his foot catches and removes its plug; as the water drains a glowing blue object can be briefly seen to be washed away with it. After a few cries for help it is revealed that he is not, in fact, alone. Surgeon Dr. Lawrence Gordon (Cary Elwes) is on the other side of the same room, and soon finds the switch to turn on the lights.

Both men are inside a grimy, dilapidated industrial bathroom, chained to pipes at opposite corners of the room. Between them, out of their reach, is a body lying in a pool of blood, holding a revolver and a microcassette recorder. Both men discover envelopes in their pockets which contain microtapes; Gordon also holds a bullet and a key that does not unlock their shackles. Adam, with Lawrence's help, manages to snag the player from the body with which they play their tapes. Both tapes have the same voice, distorted by a pitch modulator. Adam's tape refers to him as a voyeur and asks, "Are you going to watch yourself die, or do something about it?" Gordon's tape reveals he must kill Adam before six o'clock (within seven hours as evident by a clock on the wall), or his wife and daughter will die and he will be left in the bathroom, presumably forever to starve to death. "Let the game begin..." the voice concludes. Hacksaws are soon discovered in the toilet tank; neither is sufficiently sharp to cut chain, and Adam accidentally snaps his in frustration. Dr. Gordon realizes that the saws are meant instead for their own ankles, which, if sawed through, would free them from their shackles.

The film then presents flashbacks of their captor's previous victims: Paul and Mark. Both men failed to escape, and hence had pieces of skin cut from them in the shape of a jigsaw puzzle piece; thus the genesis for referring to him as the "Jigsaw Killer" by the detectives Tapp (Danny Glover), Sing (Ken Leung) and Kerry (Dina Meyer) who investigate the murders. Back in the bathroom, Dr. Gordon comments that they are dealing with a misnomer, as the killer never directly murders his victims nor places them in situations where death is unavoidable. In yet another flashback we are shown the police interrogation (with Dr. Gordon witnessing behind a window) of Jigsaw's only known survivor, a highly traumatized heroin addict named Amanda Young (Shawnee Smith), who believes that her experience in the test has made her a better person in the end.

After a brief sequence where Adam and Dr. Gordon discover a hidden camera, another flashback sequence shows Gordon's last moments with his family, and their subsequent abduction. Another flashback shows an attempt by Tapp and Sing illegally breaking and entering into what turns out to be one of Jigsaw's lairs. The two discover a man tied to a chair with two drills mounted on each side. Before the Detectives can secure Jigsaw's arrest, he starts the drills. While Tapp subdues Jigsaw, Sing attempts to save Jeff. Though Jigsaw helpfully points out a box that contains the key to release Jeff, the box in question is seemingly endlessly filled with keys; Sing shoots the drills instead, but the gunshots distract Tapp long enough for Jigsaw to escape, who slashes and permanently scars Tapp's throat in the process. While Tapp recovers from his deep knife wound, Sing pursues Jigsaw and is killed by multiple shotguns set on a tripwire.

His partner's death has a permanent effect on Tapp, and what was already an unhealthy fascination with the case deepens into an obsession that leads to him being discharged from the police force. Convinced from a piece of evidence from earlier in the film that Dr. Gordon is the Jigsaw killer, Tapp moves into a house across the street from Gordon's and monitors it with video surveillance.

Back in the bathroom, Gordon (with assistance from Adam) discovers a box holding cigarettes, a lighter and a note suggesting he dip a cigarette in poisoned blood from the body and uses it to kill Adam. Gordon and Adam attempt to fool the camera by faking Adam's death with the un-poisoned cigarette, but a strong electric shock is sent through Adam's chain, proving Adam to still be alive. The box also contains a cell phone which cannot make calls, but receives one from his wife Alison (Monica Potter), who tells Gordon that Adam knows more than he is revealing. Adam explains that he had been paid by Detective Tapp to spy on Gordon, and has witnessed him going to a hotel with the intention of cheating on his wife. In fact, Gordon left the hotel before doing anything, but this is between Gordon and the other woman, Carla (one of the med students to which Gordon had been explaining the condition of a cancer patient of his, John Kramer), and no mention is made of possible previous encounters. In the pile of Adam's photographs which he hid from view of Gordon when found with the hacksaws, the two find a photograph of an orderly at Gordon's hospital named Zep, seen through Gordon's window after he left the house. Just as this realization is made, however, the hour of six PM strikes.

Alison manages to free herself and take control of Zep's handgun, however she is soon overpowered. Shots are fired, which attract the attention of Tapp, who wounds Zep. He is unable to keep him from leaving the house, however, intent on killing Gordon; who is only aware of the sounds of screaming and gunshots. Flung into a state of desperate temporary insanity, he follows his instructions by sawing off his foot and shooting Adam with the revolver held by the body in the middle of the room and the bullet found in his envelope.

Zep arrives, pursued by Tapp, however Zep manages to shoot Tapp fatally. He then enters the bathroom but tells Gordon he's "too late," because "it's the rules." Adam recovers from his gunshot wound, which was in fact non-fatal, and kills Zep with the toilet tank lid. Gordon crawls away to seek medical attention, promising to return with help.

Adam searches Zep for a key to his chain and instead finds another micro-cassette player. As the climatic theme of the series, "Hello Zep", begins, the tape informs Adam, that Zep was also following instructions under pain of death. As soon as Jigsaw's familiar voice ceases, the body lying in the center of the bathroom lets out a long breath. As Adam watches, his face frozen in horror, the dead man peels off the latex that gave the appearance of his head wound and then slowly rises to his feet. He is John Kramer (Tobin Bell), a terminal brain cancer patient of Gordon's; he is seen, briefly, in the same flashback where Zep is (equally briefly) introduced. Jigsaw/John Kramer, whose voice is in fact quite weak, informs Adam that the key to his chain was in the bathtub all along; a quick flashback replays the opening scene of the movie, where an object is seen to disappear down the drain with the water.

Adam reaches for a gun to shoot John, but is stunned with electricity, triggering an extended flashback sequence that runs through the vital shots of the movie in roughly 30 seconds. Just before he flicks off the lights in the bathroom for the last time, John repeats a line he said to Amanda immediately after she escaped: "Most people are so ungrateful to be alive. But not you. Not anymore." John then shouts: "Game Over!" before slamming the door shut, sealing Adam in the bathroom forever, screaming his despair over the end credits.

Copyright © 2020 filmarena.cz | Created by: tvorba webových stránek
We have 11217 products for you.