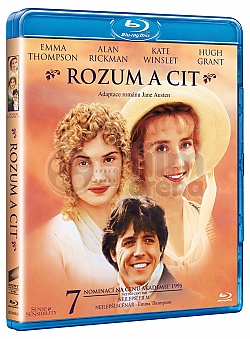 When Mr. Dashwood dies, he must leave the bulk of his estate to the son by his first marriage, which leaves his second wife and their three daughters (Elinor, Marianne, and Margaret) in straitened circumstances. They are taken in by a kindly cousin, but their lack of fortune affects the marriageability of both practical Elinor and romantic Marianne. When Elinor forms an attachment for the wealthy Edward Ferrars, his family disapproves and separates them. And though Mrs. Jennings tries to match the worthy (and rich) Colonel Brandon to her, Marianne finds the dashing and fiery John Willoughby more to her taste. Both relationships are sorely tried.

This is yet another adaption of Jane Austin's book Sense and Sensibility. It is set in the neo-Classicism era, this is plainly seen in the style of dress by women and men, as well as the architecture of the wealthy houses.

When Mr. Dashwood dies, his wife and three daughters - Elinor, Marianne and Margaret - are dismayed to learn that their inheritance consists of only 500 a year, with the bulk of the estate of Norland Park left to his son John from a previous marriage. John's scheming, greedy, snobbish wife Fanny immediately installs herself and her spouse in the palatial home and invites her brother Edward Ferrars to stay with them. She frets about the budding friendship between Edward and Elinor and does everything she can to prevent it from developing.

Sir John Middleton, a cousin of the widowed Mrs. Dashwood, offers her a small cottage house on his estate, Barton Park in Devonshire. She and her daughters move in. It is here that Marianne meets the older Colonel Brandon, who falls in love with her at first sight. Competing with him for her affections is the dashing but deceitful John Willoughby, who steals Marianne's heart. Unbeknownst to the Dashwood family, Brandon's ward is found to be pregnant with Willoughby's child, and Willoughby's aunt Lady Allen disinherits him. He moves to London, leaving Marianne heartbroken.

Sir John's mother-in-law, Mrs. Jennings, invites her daughter and son-in-law, Mr. and Mrs. Palmer, to visit. They bring with them the impoverished Lucy Steele. Lucy confides in Elinor that she and Edward have been engaged secretly for five years, thus dashing Elinor's hopes of romance with him. Mrs. Jennings takes Lucy, Elinor, and Marianne to London, where they meet Willoughby at a ball. They learn that he is engaged to the extremely wealthy Miss Grey; and the clandestine engagement of Edward and Lucy comes to light. Edward's mother demands that he break off the engagement. When he refuses, his fortune is taken from him and given to his younger brother Robert.

On their way home to Devonshire, Elinor and Marianne stop for the night at the country estate of the Palmers, who live near Willoughby. Marianne cannot resist going to see his estate and walks five miles in a torrential rain to do so. As a result, she becomes seriously ill and is nursed back to health by Elinor.

After Marianne recovers, the sisters return home. They learn that Miss Steele has become Mrs. Ferrars and assume that she is married to Edward, who arrives to explain that Miss Steele has unexpectedly wed Robert Ferrars. Edward is thus released from his engagement. Edward proposes to Elinor and becomes a vicar, while Marianne falls in love with and marries Colonel Brandon. In the distance, Mr. Willoughby watches from his horse on the hill, regretting his choice of money over his love, Marianne.

Bonuses to Sense And Sensibility (Blu-ray)

Copyright © 2020 filmarena.cz | Created by: tvorba webových stránek
We have 11216 products for you.