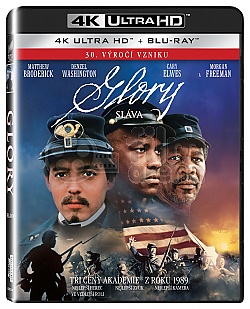 Shaw was an officer in the Federal Army during the American Civil War who volunteered to lead the first company of black soldiers. Shaw was forced to deal with the prejudices of both the enemy (who had orders to kill commanding officers of blacks), and of his own fellow officers.

During the American Civil War, the Massachusetts Infantry Regiment engages Confederate forces in the bloody Battle of Antietam. Captain Robert Shaw (Matthew Broderick) is injured in the battle and assumed lost, but is found alive by a gravedigger named John Rawlins (Morgan Freeman) and sent to a field hospital. While on medical leave in Boston, Shaw visits his family, and is introduced to Frederick Douglass. Shaw is offered a promotion to the rank of Colonel, and command of the first all-black regiment the 54th Massachusetts Volunteer Infantry. He accepts the responsibility, and asks his childhood friend, Major Cabot Forbes (Cary Elwes) to serve as his second in command. Their first volunteer soldier is another one of Shaw's friends, a bookish freeman named Thomas Searles (Andre Braugher). Other recruits soon follow, including Rawlins, timid freeman Jupiter (Jihmi Kennedy), and Trip (Denzel Washington), an escaped slave who is mistrustful of Shaw. Trip instantly clashes with Thomas, and Rawlins must keep the peace.

When the Confederacy issues an order that all black soldiers found in Union uniform will be summarily executed as will their white officers, the opportunity is given to all men in the 54th to take a honorable discharge, but none do. The black soldiers undergo a Draconian training regimen under the harsh supervision of Sgt. Mulcahy (John Finn). Forbes and Shaw argue over the brutality of the training, as the former believes they will never be allowed to fight and will only be used as a manual labor force.

When Trip goes AWOL and is caught, Shaw orders him flogged in front of the troops. The scars of his previous beatings as a slave are exposed and this presents a real dilemma for the abolitionist Shaw. While talking to Rawlins, Shaw finds out that Trip had left merely to find suitable shoes to replace his own worn ones. Shaw realizes that supplies are being denied to his soldiers because of their race. He belligerently confronts the quartermaster, Kendric (Richard Riehle), and finds out that indeed shoes and socks were in stock but had not been given to the black soldiers. His advocacy on behalf of his soldiers continues through a pay dispute during which the Federal government decided to pay black soldiers less than white soldiers.

Once the 54th completes its training, they are transferred under the command of General Charles Garrison Harker (Bob Gunton). On the way to joining the war in South Carolina, the 54th is ordered to sack a Georgia town and burn it by Harker's second-in-command, Colonel Montgomery (Cliff De Young). After first refusing, he obeys the order and the town is destroyed. Shaw continues to lobby his superiors to allow his men to join the fight. All their duties since being activated involved building and manual labor. Shaw invests Rawlins as a Sergeant Major and Rawlins begins the difficult task of earning respect from both the white and black soldiers.

Shaw confronts Harker and threatens to report the smuggling, looting, and graft he has discovered unless Harker orders the 54th into combat. In their first battle on James Island, South Carolina, early success is followed by a bloody confrontation with many casualties. However, the Confederates are beaten and retreat. During the battle,Thomas is wounded but saves Trip, finally earning the respect of the former slave. He subsequently refuses to go home to recover.

Some time after, General George Strong (Jay O. Sanders) informs Shaw and his superiors of a major campaign to secure a foothold in Charleston Harbor. This will involve assaulting the nearby Morris Island and capturing its impenetrable fortress, Battery Wagner.The fort's only landward approach is via a small strip of beach with little cover, and the first regiment to charge is sure to suffer extremely heavy casualties. Shaw volunteers to have the 54th lead the charge.The night before the battle, the black soldiers conduct a religious service where individual soldiers offer their prayers amid hymn signing. Rawlins and Trip make emotional speeches to inspire the troops and to ask for God's help.

The 54th leads the charge on the fort and heavy casualties ensue on the beach as artillery fire smashes through the ranks. As night falls the bombardment continues and no progress can be made. Shaw attempts to urge the men forward, but is shot several times and killed. Stunned, the soldiers stay where they are until Trip lifts up the flag and rallies the soldiers to continue on. He is shot several times while doing so, but holds up the flag to his last breath. Forbes takes charge of the regiment, and they are able to break through the fort's outer defenses, but find themselves greatly outnumbered once they are inside. The morning after the battle, we see the beach littered with bodies as the Confederate flag is raised over the fort. As the corpses are buried in a mass grave, Shaw and Trip's bodies fall next to each other.

The closing narration reveals that Battery Wagner was never taken by Union forces. However, the sacrifice of the 54th, which lost nearly half its men in the battle, was not in vain, as their bravery inspired the Union to recruit more black men for combat.

Copyright © 2020 filmarena.cz | Created by: tvorba webových stránek
We have 11250 products for you.