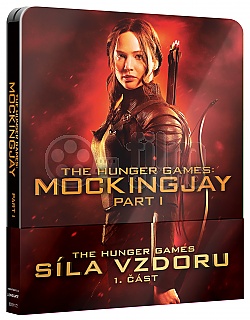 299 CZK
With this product you can buy even more products from this category MULTIBUY Blu-Ray and save 50%!

Slipcover is a removable cardboard cover, which covers the lower front part of SteelBook and covers the entire back side. On the back side you will find the specifications and content information.

Katniss Everdeen is in District 13 after she shatters the games forever. Under the leadership of President Coin and the advice of her trusted friends, Katniss spreads her wings as she fights to save Peeta and a nation moved by her courage.

After obliterating the Hunger Games (watch catching fire), a televised fight to the death among 12 to 18 year olds (watch the hunger games), Katniss has been brought to an underground, secretive district 13. Katniss is angry. Johanna and Enobaria are trapped in the Capitol. Her loved ones are fading away. She is forced into her rule as the mockingjay, the symbol of the rebellion and mass destruction. But she is angry... Peeta, the baker's boy, is in the Capitol. And Katniss need to save him."IF WE BURN, YOU BURN WITH US"