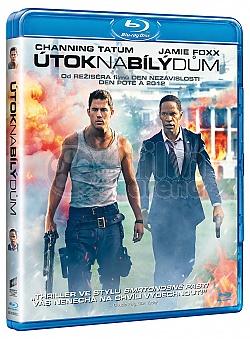 Capitol Policeman John Cale has just been denied his dream job with the Secret Service of protecting President James Sawyer. Not wanting to let down his little girl with the news, he takes her on a tour of the White House, when the complex is overtaken by a heavily armed paramilitary group. Now, with the nation's government falling into chaos and time running out, it's up to Cale to save the president, his daughter, and the country.

John Cale (Channing Tatum) is a United States Capitol Police officer assigned to Speaker of the House of Representatives Eli Raphelson (Richard Jenkins) after Cale saved Raphelson's nephew's life during a tour in Afghanistan. Cale is struggling to develop a better relationship with his daughter Emily (Joey King), who has a strong enthusiasm for politics. He hopes to impress her by getting a job with the Secret Service, but the interview is conducted by Carol Finnerty (Maggie Gyllenhaal), a former college acquaintance of his who believes that he is unqualified due to a lack of respect for authority. After lying to Emily about the outcome of the interview, she and Cale join a tour of the White House. At the same time, U.S. President James Sawyer (Jamie Foxx) proposes a controversial peace treaty between allied countries to remove military forces from the Middle East.

Meanwhile, a man disguised as a janitor detonates a bomb at the center of the United States Capitol, causing the collapse of the building's dome. Raphelson - who was in the Capitol but is uninjured - and Finnerty are taken to a secure command center underneath the Pentagon while Vice President Alvin Hammond (Michael Murphy) is taken aboard Air Force One. The White House is put on lockdown separating Cale from Emily (who had left the tour group to use the restroom). Meanwhile, mercenaries led by Emil Stenz (Jason Clarke) start killing off most of the Secret Service and take the tour group hostage, but Cale manages to take a gun from a mercenary named Carl Killick (Kevin Rankin) and escapes to go and find his daughter. Meanwhile, retiring Head of the Presidential Detail Martin Walker (James Woods) escorts President Sawyer and his detail to the Presidential Emergency Operations Center. Once Sawyer gains access, Walker kills everyone else in Sawyer's detail, revealing himself to be the leader of the attack; he wants revenge for his son who was killed during a botched black ops mission. Cale, who fails to find Emily, kills a mercenary and takes his gun and radio. Using the radio, Cale locates and rescues the President.

Walker and Stenz bring in Skip Tyler (Jimmi Simpson) to hack into the defense system, but they still require Sawyer to activate the nuclear football. Emily, while hiding, records a video of the mercenaries and uploads it to YouTube before eventually being captured by Killick. Walker demands $400 million from the Federal Reserve as ransom for the hostages. Cale and Sawyer manage to get in contact with the Pentagon, and Finnerty tells Cale to get Sawyer out through a series of secret underground tunnels. Finnerty then uses Emily's video to discover the mercenaries' identities, discovering that they used to work for various government agencies and radical political groups. They are informed that Stenz, a former Special Forces operative, was disavowed and burned on mission, leading to his capture by the Taliban. They also discover that Walker has terminal cancer, suggesting his involvement to be a suicide mission and that the attack is not for ransom. Cale and Sawyer find the tunnel gate rigged with an explosive and are forced to escape in a presidential limousine. After a car chase/shootout with Stenz on the White House lawn, Cale and Sawyer are flipped into the White House pool after Cale gets distracted by the sight of Killick holding Emily at gunpoint. A gunfight erupts which results in an explosion that leaves Sawyer and Cale presumed dead. Aboard Air Force One, Hammond is then sworn in as President.

When Cale and Sawyer reveal they are still alive, they learn Hammond has approved an aerial incursion by Delta Force to take back the White House. Knowing the mercenaries have Javelin surface-to-air missiles, Cale tries but fails to stop the mercenaries from shooting down the helicopters. Cale gets into a fight with Stenz and ends up dropping his White House passes for himself and Emily while escaping. Having already learned of Emily from the video, Stenz, knowing that she is Cale's daughter, takes her to Walker in the Oval Office. Meanwhile, Tyler finishes the upload to NORAD and launches a missile at Air Force One, killing everyone on board, including Hammond. Raphelson is then sworn in as President and, in a last ditch effort to end the crisis, orders an air strike on the White House. Finnerty informs Cale of Raphelson's decision.

Walker tells Cale over the White House intercom to surrender Sawyer or he will shoot Emily. Sawyer ultimately surrenders himself to save Emily, knowing Cale could still save them both if he was free. Holding the pair in the Oval Office, Walker reveals to Sawyer that his motive for the attack was to convey a message of American power. Because of Sawyer's dislike of military force, as well as backing out of the mission that killed his son, Walker had grown to believe Sawyer was too weak to be President; by launching a nuclear attack on Iran, Walker had hoped to regain international respect for America and avenge his own personal loss. He asks for Sawyer to activate the nuclear football. Sawyer refuses, and tries to convince Walker that his son did not die in vain, and that the peace treaty was a form of victory. When Walker threatens to shoot Emily again, the alarms and sprinklers are activated by Cale setting fire to the Lincoln Bedroom. In the chaos, Tyler tries to escape but encounters the tunnel gate bomb. When he tries to deactivate it, it detonates instead, killing him. Killick finds Cale and tries to kill him, but is ambushed by Donnie Smith, the White House tour guide (Nicolas Wright), who bludgeons Killick to death with a clock. After freeing the hostages and entrusting Donnie to get them out safely, Cale battles Stenz and ultimately kills him with a grenade belt. Using the explosion to catch him off guard, Sawyer attacks a distracted Walker, but Walker gains the upper hand and forces Sawyer to activate the football before apparently shooting him dead. Using updated launch codes from an anonymous source, Walker targets various cities in Iran, but before he can initiate the launch, Cale smashes through the wall of the Oval Office with a presidential SUV, and kills Walker with the SUV's minigun. Cale warns Emily of the air strike, and she takes a presidential flag and waves it on the front lawn, prompting the pilots to call off the attack. Meanwhile, Sawyer reveals himself to be alive since the bullet that hit him hit a pocket watch his wife (Garcelle Beauvais) had given him. Finnerty calls them to reveal that the mercenaries were not hired by Walker, and that there is another person behind the attack. Cale realizes who it is and asks Sawyer for his help in exposing the person.

Later, Finnerty arrives at the White House with Raphelson. When Cale tells them Sawyer was killed, Raphelson then orders troops to be placed back into the Middle East, which would go against Sawyer's peace treaty. Cale then reveals Raphelson had conspired with Walker to orchestrate the attack because of Raphelson's opposition to Sawyer's treaty and then proves it by having Finnerty call the call-back number on Walker's pager, which was the source of the updated launch codes. Sawyer arrives and has Raphelson taken into custody, treating his taking of the Presidency as a coup d'tat. Sawyer then officially offers Cale a job in the Secret Service and takes him and Emily on an aerial tour of Washington, D.C. on his way to the hospital. Realizing an increased need for peace due to the day's events, Russia, Iran, China, and other Middle Eastern and Asian countries agree to sign Sawyer's peace treaty.

Bonuses to White House Down (Blu-ray)