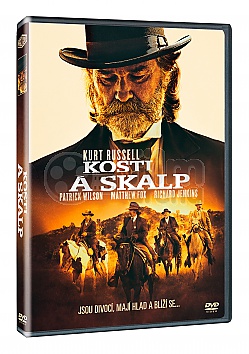 After an outlaw unknowingly leads a band of cannibalistic Troglodytes into the peaceful western town of Bright Hope, the monsters kidnap several settlers, including the wife of a local rancher. Despite his injured leg the rancher joins a small rescue party with the sheriff, his aging deputy and a strong-willed gunslinger. What follows is a journey into hell on earth as the posse comes to realize it is up against a foe whose savagery knows no bounds. The film takes place in the mid 1800's around the border of what is now Texas and New Mexico.

In the 1890s, two drifters, Purvis and Buddy make a living killing and robbing travelers. Spooked by the sound of approaching horses, they hide in the hills and encounter a Native American burial site. Buddy is attacked and killed by unseen attackers, and Purvis escapes.

Eleven days later, Purvis arrives in the small town of Bright Hope and buries his stolen belongings. Chicory, the town's elderly backup deputy, spots him and reports to Sheriff Franklin Hunt. At the town's saloon, Hunt confronts Purvis. When asked his name, Purvis hesitates before giving the name "Buddy" in an attempt to hide his identity. Sheriff Hunt shoots Purvis in the leg when he tries to escape. Hunt sends John Brooder, a local educated man and known womanizer who witnesses the shooting, to fetch the town's doctor. Meanwhile, foreman Arthur O'Dwyer rests at home with a broken leg. His wife Samantha, the doctor's assistant, tends to his wound. As the doctor is drunk, Brooder calls Samantha and escorts her to the jail to treat Purvis's wound. Leaving Samantha with Purvis and his deputy Nick, Hunt and the others return home. That night, at a stable house, a stable boy is murdered by unseen attackers.

The murder is reported to Hunt, who investigates the scene and finds the horses missing. The jail is empty and only an arrow is left behind. Hunt calls a local Native American man to examine the arrow, and informs Arthur of the news. At the saloon, the Native American man links the arrow to a troglodyte clan. He tells Hunt of the clan's dwelling place, "Valley of the Starving Men", and warns him that they are a group of cannibalistic savages. Certain that Samantha, Nick and Purvis had been captured by them, Hunt prepares to go after them with Arthur. Chicory and Brooder volunteer to accompany them.

Days into their ride, two Mexican strangers stumble across their camp. Fearing they are scouts for a raid, Brooder kills them and they set up a cold camp elsewhere to avoid being attacked. During the night, a group of raiders ambush them, where the raiders injure Brooder's horse and steal the rest. Brooder, wounded by an attacker, regretfully puts down his horse. After a day of walking, a fight breaks out between Brooder and Arthur, exacerbating Arthur's broken leg. Chicory sets his leg and leaves him behind to recover, while he, Hunt, and Brooder move on.

At the valley, the three men are injured by a volley of arrows. After killing two attackers, Hunt and Chicory retreat, leaving Brooder, who is seriously injured. Brooder kills one attacker before being killed himself. The cannibals capture Hunt and Chicory, and imprison them in their cave. The white men find Samantha and an injured Nick, imprisoned in a nearby cage. They witness Nick being removed from his cell, stripped, scalped, cut apart and consumed. Samantha estimates the number of hostile cannibals to be around 12 (reduced to nine earlier by Hunt's posse).

Hunt realizes he has some opium tincture he confiscated from Arthur earlier to prevent him from overusing it. They lure several tribesmen to drink it, however only one drinks a fatal dose and another becomes unconscious. Meanwhile, Arthur wakes up, follows the men's trail and discovers the valley. He kills two tribesmen and notices an object embedded in their windpipes. After cutting one out, he realizes it is like a whistle. He blows on it, luring another tribesman close, then kills him.

In the cave, realizing two of their men were poisoned, the tribe leader grows angry. He and another tribesman pull Hunt from his cell, cut open his stomach and shove the hot opium flask into the wound. The leader then takes Hunt's rifle and shoots his arm and stomach. Arthur arrives and kills one of the tribesmen, while Hunt kills the leader with one the tribe's bone tomahawks. Arthur frees Samantha and Chicory, while a mortally wounded Hunt stays behind with his rifle. He prepares to kill the surviving cannibals when they return, to prevent them from chasing after them and terrorizing Bright Hope. As the three leave the cave, they see two pregnant females, who are blinded and have all their limbs amputated.

At a distance from the cave, they hear three gunshots, implying that sheriff Hunt may have killed the remaining males of the tribe. Chicory acknowledges the gunshots with a half-hearted smile. Tired, hurt, and with few supplies, the three survivors begin the journey towards home.