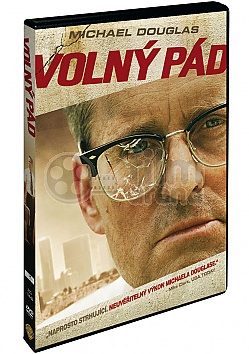 William (D-FENS) just wants to get home to see his daughter on her birthday. Unfortunately, nothing seems to be going right for him. First there's the traffic jam, then the unhelpful Korean shopkeeper who "doesn't give change". D-FENS begins to crack and starts to fight back against the every day "injustices" he encounters on his journey home. The film has a story running in parallel about a desk-bound cop who is about to retire. He's retiring for his wife's sake, and obviously isn't happy about it. The cop tracks down D-FENS and in the final scene.....

Michael Douglas plays a disturbed man whose true identity is unknown through most of the film. He is stuck in Los Angeles traffic on a very hot summer day and finally just gives up and abandons his vehicle. D-Fens, as he is credited in the film (based on his vanity license plate), begins walking west, trying to reach his estranged wife and daughter. It's the little girl's birthday, and he is determined to reach "home" to be with her.

In a parallel story line, Detective Prendergast of the LAPD (Robert Duvall) is on his last day before taking an early retirement. His needy, bossy wife demanded that he do this, and Prendergast took a "safe" desk job a few years back to placate her as well. He comes upon D-Fens's abandoned car on his way to work and helps push it out of traffic.

D-Fens calls his ex-wife on a pay phone but hangs up when she answers. Short on coins to call again, he enters a Korean-owned convenience store. He respects the "no change without purchase" policy and tries to buy a can of Coke. He is incensed at the high price and begins a tirade against foreigners who come to America and charge outrageous prices. He is soon fighting with the Korean owner and, after grabbing a sawed-off baseball bat from the man, begins wrecking the store. Eventually he calms down a little, pays a "reasonable" price for the soda, and leaves.

Heading for Venice, California, D-Fens climbs a hill in "gangland," an area rife with Hispanic gang activity. Two young gang-bangers accost him because he's a white man in a white shirt and a tie, with a briefcase, wandering through their "hood." When D-Fens fails to hand over any money, they threaten him with a knife, and he counters with the bat he got at the convenience store. He injures one assailant's arm and drives the other off. Dropping the bat, he picks up the butterfly knife, establishing a pattern of increasing his armament throughout the film.

The Latino gang members vow revenge, and a carload (with many firearms, including automatic weapons) is soon out hunting for D-Fens. He is again calling his ex from a pay phone, threatening to show up at his daughter's birthday party. The gangsters attempt a drive-by shooting but miss D-Fens, hitting other bystanders and crashing their car. Going up to the wreckage, D-Fens admonishes them for missing him, shoots one in the leg, and makes off with a gym bag filled with guns.

Hungry, D-Fens stops by Whammy Burger, only to be told that breakfast stopped being served five minutes earlier. Not a wise thing to tell the psychotic D-Fens, and he soon pulls out a submachine gun, threatening everyone and deciding to have lunch instead. After berating the staff for serving him a hamburger that looks nothing like the advertising posters, he leaves.

Prendergast (in between whiny calls from his wife) is starting to notice a pattern. The Korean store owner came in to complain, and the detective heard about the bold daylight shooting attempt. He looks on an L.A. map and sees that the mysterious man in a white shirt and a tie is walking toward the ocean. Perceived as a "fallen" cop by his superior, however, Prendergast's observations are not taken seriously.

D-Fens's ex calls the police to gain protection from him, but they don't believe he's much of a threat and leave.

The increasingly disturbed D-Fens goes into an Army-Navy surplus store run by a gay-bashing Nazi (Frederic Forrest) to buy more durable footwear for his trek. While he's being fitted, police detective Torres (Rachel Ticotin) comes in asking about him. The Nazi owner distracts her and, after she leaves, tells D-Fens he knows all about his activities. The Nazi assumes D-Fens is a racist who is attacking nonwhites. After being corrected about this, the irate skinhead attempts to handcuff D-Fens to turn him over to the police. He is instead knifed and ultimately killed. D-Fens clothes himself in military-style garb and sets out on his quest once again.

He cuts through a nearby golf course and is accosted by two elderly golfers. After berating them for wasting such lovely green space on a silly game, he shoots up their golf cart, causing one to have a heart attack.

D-Fens eventually reaches his former home, but his wife leaves just in time. Prendergast, who has put the whole puzzle together, rushes to the scene with his friend, Detective Torres. Having turned in his weapon (it's his last day before retirement), Prendergast is unarmed. D-Fens shoots Torres, wounding her slightly, and the older detective grabs her weapon and chases D-Fens onto a fishing pier. Prendergast has a final confrontation with D-Fens and kills him.