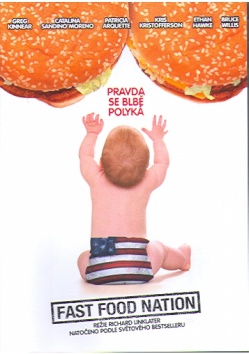 Don Anderson is the Mickey's food restaurant chain's Marketing Director. He is the inventor of the "Big One" the hamburger best seller of Mickey's. An independent research reports the presence of cow's feces in the Big One. So Don is sent to Cody, Colorado, to verify if the slaughterhouse, main supplier of Mickey's, is efficient as it appears and the production process is regular. During his investigations he discovers the horrible truth behind a simple hamburger; the reality is not like we think it is. Don discovers what the mass production system involves, from the temp workers like Amber, to the exploitation of Mexican irregular immigrants. It is not only the meat that is crushed in the mincing machine, but all our society.

At the core of the ensemble drama is Don Anderson, the Marketing Director for the hamburger chain Mickey's, who helped develop the "Big One," its most popular menu item. When he learns that independent research has discovered the considerable presence of fecal matter in the meat, he travels to Cody, Colorado to verify if the local slaughterhouse, the main supplier for Mickey's, is guilty of sloppy production techniques.

Don's tour of the processing plant shows him only the pristine work areas and most efficient procedures, but those with previous connections to the company alert him of all the horrors that were kept secret from him. Don slowly comes to the realization that the simple hamburger sold by Mickey's and everywhere else may not be as healthy as the public is led to believe it is.

Secondary plots deal with the exploitation of illegal immigrants from Mexico, the expectations of fast food restaurant employees and how they are treated, and the efforts of a small group of young anti-corporate activists to save the cattle from horrendous conditions.

The film ends with a glory scene in which real cows are slaughtered.