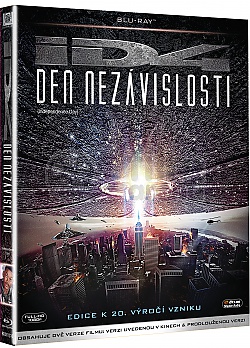 On July 2nd, communications systems worldwide are sent into chaos by a strange atmospheric interference. It is soon learned by the military that a number of enormous objects are on a collision course with Earth. At first thought to be meteors, they are later revealed to be gigantic spacecraft, piloted by a mysterious alien species. After attempts to communicate with the aliens go nowhere, David Levinson, an ex-scientist turned cable technician, discovers that the aliens are going to attack major points around the globe in less than a day.

On July 3rd, the aliens all but obliterate New York, Los Angeles and Washington, as well as Paris, London, Houston and Moscow. The survivors set out in convoys towards Area 51, a strange government testing ground where it is rumored the military has a captured alien spacecraft of their own. The survivors devise a plan to fight back against the enslaving aliens, and July 4th becomes the day humanity will fight for its freedom. July 4th is their Independence Day...

On July 2, a giant alien mothership, over 340 miles in diameter (550 km) enters orbit around Earth and deploys several dozen saucer-shaped "destroyer" spacecraft, each 15 miles (24 km) in width. The destroyers take positions over many of Earth's major cities, including New York, Washington, D.C. and Los Angeles. David Levinson (Jeff Goldblum), an MIT-graduate working for a cable company in New York City, discovers hidden satellite transmissions which he believes is a timer counting down to a coordinated attack by the aliens. With the help of his ex-wife Constance Spano (Margaret Colin), a White House staffer, David and his father Julius (Judd Hirsch) gain entrance into the Oval Office to warn President Thomas J. Whitmore (Bill Pullman) of the impending attack. The President immediately orders large-scale evacuations of the targeted U.S. cities, but the aliens attack with advanced directed energy weapons before the evacuations could be completed. The President, his young daughter, portions of his staff, Constance and the Levinsons narrowly escape aboard Air Force One as a destroyer lays waste to Washington D.C.

On July 3, the United States conducts a coordinated counterattack; the movie follows the Black Knights, a squadron of Marine Corps F/A-18 Hornets from El Toro Marine Corps Air Station, as they participate in an assault on the destroyer that has devastated the city of Los Angeles. Their weapons fail to penetrate the craft's force field, and it responds by releasing scores of smaller "attacker" ships which are similarly shielded and armed with high-energy torpedoes. One-sided dogfights ensue. Captain Steven Hiller (Will Smith) manages to evade the guns of the attacker ships and lures a single attacker to the Grand Canyon. There, as his jet is about out of fuel and the attacker is about to overtake him, he deploys the landing chute for his jet and it drapes across the alien craft, temporarily disorienting the pilot. Captain Hiller then ejects from his jet. The alien crashes into the top of the canyon wall and lands in the desert. Captain Hiller parachutes to a landing close by and angrily marches over to find and confront whatever life form is in the alien craft. The door to the alien fighter craft pops open and a very bizarre looking creature with tentacles appears. Captain Hiller delivers a right cross and knocks the creature out, saying "Welcome to Earth!!" He sits down and smokes a victory cigar.

As Hiller is using his parachute to drag the body of the alien across the desert, he is picked up by Russell Casse (Randy Quaid), a crop-duster pilot who is traveling across the desert with his kids and a group of refugees in a convoy of RVs. From there they take the captured alien to Area 51, commanded by Major Mitchell (Adam Baldwin). Area 51 also happens to be where the President and his remaining staff have landed. Area 51 conceals a top secret facility housing a repaired attacker ship and three dead alien bodies. Attempts have been underway since the late 1960s to repair the attacker ship. Upon arrival of the alien Mother Ship, the controls for the attacker have become activated.

When lead scientist Dr. Brackish Okun (Brent Spiner) removes an outer "bio-mechanical" suit from the alien, the living being inside is revealed. The creature regains consciousness and kills Dr. Okun and the examining crew, and because it has no vocal cords, it makes use of Dr. Okun's voice to communicate with President Whitmore, who is outside the glass windows of the operating room. Its first words are "Release me." President Whitmore poses a question to the alien, asking if the people of Earth & their invaders can live in peace. The creature says "No." When the President asks the creature what it wants them to do, it responds, "Die." It then uses its telepathic powers to immobilize the President and fling him to the ground. The military personnel then shoot the alien through the glass, with Major Mitchell stepping through the broken glass and delivering a final head shot.

During the instant that President Whitmore was immobilized, he was able to read the thoughts of the alien and learned of their plan: they attack planets, use up the resources, kill the life forms, then move on. President Whitmore now issues very clear orders to "nuke the bastards."

B-2 Spirit bombers are deployed, with the first destroyer targeted one that is hovering over a deserted Houston, TX. The weapon explodes, but proves ineffective at penetrating the craft's force field and destroys the city instead; as a result, the President orders the remaining bombers called back.

President Whitmore and his daughter are reunited with the First Lady, Marilyn Whitmore (Mary McDonnell) at Area 51. Mrs. Whitmore had been on a working trip to Los Angeles and got caught up in the destroyer attack there. Captain Hiller's exotic dancer girlfriend, Jasmine (Vivica A. Fox), rescues the First Lady when she comes across the wreckage of the helicopter the First Lady had been attempting to escape in. Captain Hiller later locates Jasmin, her son Dillon, and the First Lady camped out in the remains of El Toro MCAS and flew them in a helicopter to Area 51. A doctor tells the President that his wife has uncontrollable internal bleeding. When the President goes in to see her, he says, "The doctors say you're gonna be just fine." She smiles and responds softly, "Liar." She dies not long after that.

David Levinson suggests a plan that involves using the newly operable attacker to gain access to the interior of the alien mothership in space in order to introduce a computer virus that will disable the protective shields around the destroyers and attackers. Once the computer virus takes effect, nuclear weapons would be used to destroy the mothership. Hiller volunteers to be pilot the attacker, with Levinson accompanying him to upload the virus.

With satellite communications knocked out, the Americans must use Morse code to coordinate an attack with the remaining forces around the world, timed to occur when the invaders' shields are set to fail. With their military pilots at a low number to pilot all available aircraft, the battle requires several volunteers, including President Whitmore and Russell, who both have previous combat flight experience.

Hiller and Levinson successfully reach the mothership and implant the virus. President Whitmore leads the American jet fighters against the alien destroyer approaching Area 51. Although the aliens now lack shields, the fighters' supply of missiles are quickly exhausted against the colossal craft and its large complement of assault ships. The underside of the alien craft opens up as its directed energy weapon prepares to fire on the base.The President fires a missile at the cannon but it connects and explodes with a protective hatch. Just as the squadron is informed that all their missiles have been fired, Russell Casse radios in saying he has one final rocket. As he launches it, his firing mechanism jams; he decides to pilot his aircraft into the alien weapon in a kamikaze attack. The explosion causes a chain reaction which annihilates the ship. Human resistance forces around the world use the same weak point to destroy the remainder of the alien ships, while the nuclear device planted by Hiller and Levinson destroys the alien mothership soon after the duo escape. Hiller and Levinson are caught up in the aftereffects of the mothership's explosion, but are able to return to earth unharmed, crash-landing the alien fighter in the desert close to Area 51. The film ends as the everyone watches debris from the mothership enter the atmosphere like shooting stars.

Copyright © 2020 filmarena.cz | Created by: tvorba webových stránek
We have 11212 products for you.