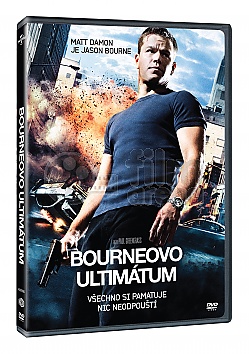 Bourne is once again brought out of hiding, this time inadvertently by London-based reporter Simon Ross who is trying to unveil Operation Blackbriar--an upgrade to Project Treadstone--in a series of newspaper columns. Bourne sets up a meeting with Ross and realizes instantly they're being scanned. Information from the reporter stirs a new set of memories, and Bourne must finally, ultimately, uncover his dark past whilst dodging The Company's best efforts in trying to eradicate him.

Having been wounded by a gunshot from the Russian assassin Kirill, Jason Bourne evades Moscow police and goes into hiding. Six weeks later, he goes to Paris to inform Martin Kreutz of the death of his sister Marie, who had been Bourne's girlfriend. The Guardian correspondent Simon Ross meets with an unidentifed person to discuss Bourne and Operation Treadstone, which is the beginning phase of Bourne's past. The CIA begin tracking Ross after he mentions "Operation Blackbriar" over a cell phone call. Bourne learns of Ross's investigation of Treadstone and they secretly meet at Waterloo Station. Bourne realizes that the CIA is tracking Ross and helps him evade capture, but Ross deviates from Bourne's instructions and is killed by Blackbriar assassin Paz, on orders from Blackbriar's director Noah Vosen.

Pamela Landy, who had been assigned to hunt Bourne six weeks earlier, but was unsuccessful, is brought in to help Vosen. They search Ross's notes and find that Ross's source was Neal Daniels, the CIA station chief in Madrid, who was formerly involved in Treadstone and is involved in Blackbriar as well. Bourne makes his way to Daniels' Madrid office, but finds it empty. After Bourne incapacitates a CIA team sent by Vosen and Landy, Nicky Parsons, a former Treadstone support technician arrives. She decides to help Bourne and tells him that Daniels has fled to Tangier.

Upon arriving in Tangier, Parsons tries to track Daniels' location but is unable to, finding that Blackbriar "asset" Desh Bouksani has been tasked with killing Daniels. Vosen learns that Parsons logged in to access information about Daniels and sends Desh after Parsons and Bourne, a decision Landy disagrees with. Bourne follows Desh to Daniels, but fails to prevent Daniels' death by a planted bomb. Bourne manages to kill Desh before he can kill Parsons, and subsequently sends Parsons into hiding. Bourne examines the contents of Daniels' charred briefcase and finds the address of the deep cover CIA bureau in New York City where Vosen directs Blackbriar.Bourne travels to New York City. Landy receives a phone call from Bourne (in a repetition of the final scene of The Bourne Supremacy), which is revealed to be tapped by Vosen. Landy thanks Bourne for the tape he sent her which revealed the corrupt dealings of former Treadstone director Ward Abbott; she also tells him that his real name is David Webb and his birthdate is "4-15-71." Bourne tells Landy to "get some rest" because she "looks tired", which she and Vosen both understand to mean that Bourne is watching her. Vosen intercepts a text to Landy from Bourne of a location to meet up and leaves his office with a team to follow Landy and capture Bourne. Bourne breaks into Vosen's office and steals classified Blackbriar documents. Vosen, who realises that the meeting was only a diversion, sends Paz after Bourne, the two finally encountering each other in a car chase which ends with Paz forcing Bourne's car to crash into a concrete barrier. Bourne gets out and holds Paz at gunpoint before sparing his life and continuing on to 415 East 71st Street, memories of which were triggered by the false birthday he was given by Landy. Vosen also figures out Landy's code and warns Dr. Albert Hirsch, who ran Treadstone's behavior modification program, that Bourne is coming.

Landy meets Bourne at the building, where Bourne gives her the Blackbriar files before going inside. Vosen arrives in minutes and starts searching for Landy, afraid that she might release the classifed information only to find her faxing the files to an unknown receiver just as the last page is being sent. Bourne encounters Hirsch in an upper level and, with Hirsch's help, remembers that he volunteered for Treadstone. He then states that he is no longer Jason Bourne and flees to the roof from Vosen's pursuing CIA team. Bourne is confronted on the roof by Paz, who asks Bourne why he did not kill him. Bourne asks Paz if he even knows why he is supposed to kill him and repeats the dying words of The Professora Treadstone assassin Bourne had killed years earlier"Look at us. Look at what they make you give." Paz lowers his gun as Bourne runs to jump off the roof, but Vosen appears and shoots at Bourne as he leaps into the East River below. Some time later, Parsons watches a television news broadcast about the exposure of Operation Blackbriar, the arrests of Hirsch and Vosen, a criminal investigation of CIA director Ezra Kramer, and David Webb, a.k.a. Jason Bourne, who was reportedly shot and fell into the East River. Upon hearing that his body has not been found after a three-day search, Parsons is seen giving a wide grin. Bourne is shown floating in the water for some time and then swimming away underwater after his fall.