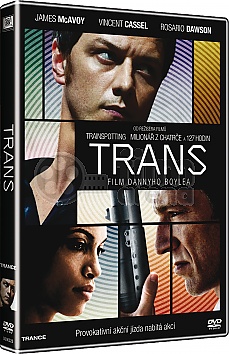 A fine art auctioneer mixed up with a gang joins forces with a hypnotherapist to recover a lost painting. As boundaries between desire, reality and hypnotic suggestion begin to blur the stakes rise faster than anyone could have anticipated.

The movie opens with Simon Newton (James McAvoy) narrating how art auctions have historically been targets for thieves, and how they continually evolve their security. However, the thieves evolve, too. Franck (Vincent Cassel) is seen casing Delancy's auction house, where Simon works. Franck's crew steals a Goya painting, and Simon attempts to foil the crime, relying on practiced procedures to save the painting. Franck knocks him unconscious, and gets away. However, the painting is not in the frame!

Simon is seen as a hero, and is released from the hospital to find that his car and house have been broken into and searched. Franck catches up with him and demands to know what happened to the painting, but Simon has mild amnesia from the blow to the head, and does not remember what happened. Simon is apparently the inside man, and they try torture to make him reveal where the painting is. Franck decides to use hypnotherapy to try and recover Simon's memory. They choose Dr. Elizabeth Lamb (Rosario Dawson) for therapy.

Simon, posing as a Mr. Maxwell, meets with Elizabeth. Simon is uncomfortable with his false identity, and Elizabeth puts him at ease. Under a light trance, Simon is able to find his lost car keys, but Franck distracts him before he mentions the painting. Later, Elizabeth researches Simon, and finds news about the heist. Simon returns to Elizabeth and tries again, but she plays a recording and silently asks him questions about Franck. She then lets Franck know that she knows about him, and meets with him. She makes a deal with Franck for equal partnership in the gang.

Elizabeth puts Simon in a trance, with Franck's gang present. He comes close to remembering, but memory of the torture breaks his trance. Simon admits to be addicted to gambling, and says that the heist is to repay debts. Elizabeth tells the gang that Simon thinks they will kill him, and says Simon needs to see that they are vulnerable. She tells Franck that a person susceptible to hypnosis can be made to do anything.

Elizabeth puts Simon under again, and he remembers the heist. Under hypnosis, he believes that he smuggled the painting out and was hit by a car driven by Elizabeth. He wakes later, remembering an MRI session with Elizabeth, where he was dissuaded from focusing on her. She discusses the finding with Franck, and they realize Simon is obsessed with Elizabeth, which may be blocking his memory of the painting. She proposes sleeping with him, but Franck opposes it. They argue, then make love. One of the gang, Nate (Danny Sapani ), see them and tells Simon.

Simon confronts Elizabeth and they get naked. Franck listens outside, and the next morning he and Simon gather with the gang to re-create the events of the heist. Simon overhears the gang talking about killing him, and he calls Elizabeth, who guides him to Franck's bedroom to get his gun. He tells her where the painting is and shoots the gang, but wakes up in her bedroom, alone. The shooting was in a trance! Elizabeth steals his car, but Franck shows up. He tells Simon that Elizabeth has been using them all along, and Nate brings her back upstairs. They torture her, and Simon tells them where the painting is. Elizabeth kisses Simon goodbye and passes something to him in his mouth. Franck and Simon head downstairs, and the gang tries to rape her. Simon gets the gun and spits out bullets, then shoots the gang members. She stops him from killing Franck, however.

Franck, Elizabeth and Simon go to a car park and retrieve the car that hit Simon after the heist. They drive out into the rain, and Simon forces Elizabeth to make him remember what's missing. She takes him back 18 months, where he first met her to stop his gambling addiction. They begin an affair, and she even shaves her pubes to make herself more like a painting. Eventually he gets jealous and hits her. She makes him forget her via hypnotic suggestion, but when he's hit by the car after the heist, he remembers their relationship, but thinks the driver is Elizabeth. They stop in an abandoned warehouse, and Elizabeth opens the trunk - the woman Simon killed (thinking it was Elizabeth) is in the trunk, along with the painting. He gives the painting to Elizabeth and sets the car on fire, including Franck. Elizabeth steals a truck and smashes it into Simon and the burning car, driving both Simon and Franck into a lake.

Franck survives, but Elizabeth leaves him. Months, later, she sends him a video of her with the painting and tells him that she implanted a suggestion for Simon to steal the painting and give it to her. She tells Franck he can forget the whole thing if he selects an icon on the screen. He cannot decide, and the movie ends.