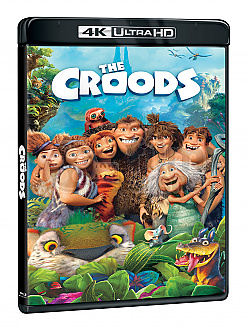 The Croods is a prehistoric comedy adventure that follows the world's first family as they embark on a journey of a lifetime when the cave that has always shielded them from danger is destroyed. Traveling across a spectacular landscape, the Croods discover an incredible new world filled with fantastic creatures -- and their outlook is changed forever.

Eep (Emma Stone) is a girl in a family of cavemen living and hunting in pre-historic times. Her family is one of the few to survive, mainly due to the strict rules of her overprotective father, Grug (Nicolas Cage). In their cave home, Grug tells a story to the family, which includes his wife Ugga (Catherine Keener), his daughter Sandy, his son Thunk (Clark Duke), and his mother-in-law Gran (Cloris Leachman). He uses the story of a character who mirrors Eep's curious nature to warn the family that exploration and 'new things' pose a threat to their survival, and says to never not be afraid. This irritates the bored and adventurous Eep, and after the family falls asleep, she leaves the cave, against her father's advice, when she sees a light moving outside.

Seeking the light's source, she meets Guy (Ryan Reynolds), a clever and inventive caveboy. She at first attacks him but then becomes fascinated with the fire he creates and is eager to learn more. He tells her about his theory that the world is reaching its 'end' and asks her to join him. She refuses and Guy leaves, but not before giving her a noise-making shell to call him if she needs help. Eep is then caught by Grug (who had been searching for her), and is later grounded for what she had done. Grug brings Eep home and is joined by the rest of the family. Eep tells them about Guy and shows them the shell given to her, only for them to destroy it in fear of 'new things'. An earthquake then occurs, sending everyone running for the cave, only to be stopped by Grug moments before the cave is destroyed by falling rocks. They climb over the wreckage to discover a land with lush vegetation, much different from their usual surroundings of rocky terrain. Grug takes his family into the forest to find a new cave.

The family is chased by a "Macawnivore" (a large, macaw-colored machairodont later called "Chunky") and attacked by a swarm of "Piranhakeets" (deadly red-feathered, piranha-like birds). In panic, Eep finds and sounds a horn similar to that which Guy gave her. Guy hears this and rushes to her. Thinking quickly, he creates a torch of fire, which scares the birds away. The other Croods are captivated by the fire, having never seen it before. They steal Guy's torch and accidentally set the land around them in flames. Some giant corn is also lit, which rockets up to the sky, prompting a display of "fireworks" as the kernels explode. After feeling impressed by Guy's intelligence and 'ideas', Grug bottles him in a hollow log to carry him in, then suggests that they take solitude in the cave of a nearby mountain mentioned by Guy. Guy is forcibly persuaded to lead the way and learns of the Croods' way of living, which he thinks of as unusual.

After an unsuccessful hunting attempt, Guy, his "pet" sloth Belt (Chris Sanders), and Eep build a puppet to fool and lure nearby Turkey-Fish. After they make their capture, the family greedily devours everything they caught. Grug then tells another of his morale-lowering tales, this time mirroring the events of their day. Guy then tells a story of his own about a paradise he calls "Tomorrow".

The next day, the family reaches a path coated in spiked rock which Grug, Thunk, and Gran get pricked upon trying to cross them. A freed Guy tries to flee but then presents one of his inventions called shoes making some out of all the resources he can find for each family member. This gains him some respect from the others except for Grug, who feels jealous of Guy's cleverness. After Guy's ideas help the Croods on their journey, the family members gain something. Ugga, Gran, and Sandy have their first idea to get past carnivorous plants by hiding under flower heads as they pass, Thunk encounters and befriends a crocodile-like dog he calls Douglas, and Eep and Guy grow closer while Grug is stranded in a ravine forcing Ugga to go back for him. The next day, Grug shows the others some of his ideas (like a see-saw, shades made out of wood, and a snapshot that involves the family being slammed with a flat rock) which fail and humiliate him. They soon reach the mountain where Grug is unable to convince the family that settling in a nearby cave is a better option. Angry, he attacks Guy. The two become stuck in tar and Guy reveals his family died drowning in a tar pool and their last words inspired his traditions of "Tomorrow." Grug has a change of heart; he and Guy trick Chunky into freeing them by pretending to be a female "Macawnivore" in trouble.

As they are about to reach their destination, an earthquake opens a deep ravine in their path. Grug throws each of them across the gap and reconciles with Eep while creating the first hug with her. Grug then throws her across the ravine and is left behind. He takes shelter in a cave and makes a torch. After seeing a blank rock face, he paints a large cave-drawing of the Croods and Guy together. He then encounters Chunky, who attacks him until Grug's torch is accidentally blown out, panicking them both. The frightened Chunky lies near Grug for comfort, who then has his first good idea. Using a bigger torch and a large skeletal rib cage, Grug manages to lure the Piranhakeets into transporting himself, Chunky, Douglas, and several other animals across the ravine, barely escaping the oncoming destruction. Afterwards, Grug shares the "hug" when he embraces his daughter again, followed by the Croods inventing the group hug.

The family discovers that they have found an ocean-like area where the sun goes down over the sea. Grug and his family - including Guy, Chunky, Belt, Douglas and all their various pets - settle down in this paradise-like environment. He stops being so over-protective; as a result the family becomes more adventurous, bringing happiness to them all.

Copyright © 2021 filmarena.cz | Created by: tvorba webových stránek
We have 7597 products for you.