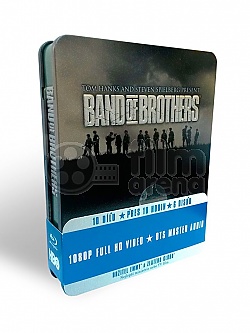 Captain Winters leads Easy Company in an attack on what they thought was a machine gun nest but turns out to 2 Companies of German SS who also have artillery support. The attack is successful in that they virtually wipe out the enemy but they do suffer many casualties. He soon finds himself promoted as the 2nd Battalion's Executive Officer and while he has concern about leaving Easy Company, he knows they are in good hands with Lt. Moose Heyliger. In the aftermath of the disastrous Operation Market Garden, Easy Company is assigned to assist a large group of British paras who are trapped behind enemy lines. Later, with Christmas approaching, the men suddenly find all passes canceled and they are quickly moved to Bastogne to help defend the city from the German offensive. The company is now led by Lt. Norman Dike, for whom the men have little respect.

The episode opens with Winters' memory of shooting a young SS officer (possibly a teenager) in combat, an incident that has had a psychological effect on the lieutenant.

The story returns to the present day, with Easy Co. stationed in Schoonderlogt, Holland on October, 17, 1944. Winters and Nixon report to battalion HQ where a new operation is being planned, Operation Pegasus; they will rescue members of Britain's Red Devils group who were trapped behind enemy lines after the failure of Operation Market Garden. Colonel Sink also stringently requests that Winters finish an overdue report on a battle involving Easy Company on October 5th.

Winters begins to recount the battle, which took place at an unidentified crossroads in Holland. Winters takes a small squad of men to investigate the area after one of Easy's men is brought in with serious injuries from a grenade. The squad finds a small detachment of German troops firing at an unseen target. Winters mounts an attack but his squad becomes pinned down by the enemy, who have the advantage of better cover. After waiting until morning and weighing their options, Winters decides the only choice is to charge the machine gun nest. He races ahead of the squad and shoots the first soldier he sees, the same teenager that haunts his conscience. The remainder of his squad arrives moments later and discover they've surprised a platoon of SS troops, some of whom are Polish. Easy also discover that another company has joined the SS soldiers, however, they are able to overpower them. The prisoners are taken back to HQ by Liebgott after Winters confiscates his ammunition, save one round, to prevent Liebgott from unnecessarily shooting any prisoners. During the cleanup phase, Col. Sink reports that the SS officers defeated by Easy were likely planning a major assault on battalion headquarters a few miles from the intersection. Winters is also promoted to captain and is made Col. Strayer's executive officer. The promotion also means that Winters will no longer command Easy Co. in battle.

Easy company members are given a short leave. Winters goes to Paris, but is still haunted by the memory of the SS teen he killed. Upon his return to his company, in Mourmelon le Grand, France, the company is called up almost immediately to report to the small Belgian crossroads town of Bastogne; they are to defend the area against the lighting attack of the Germans during the Battle of the Bulge. Easy company encounters fellow Army troops, wounded and exhausted from the strike, retreating from the area and collect whatever supplies they can. They are told they will be surrounded, without enough ammunition, food or winter clothing. The episode ends with them walking into the woods.