Beauty and the Beast (Blu-ray + DVD)

Beauty and the Beast (Blu-ray + DVD) 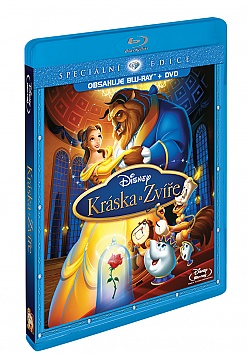 Beauty and the Beast

Belle is a girl who is dissatisfied with life in a small provincial French town, constantly trying to fend off the misplaced "affections" of conceited Gaston. The Beast is a prince who was placed under a spell because he could not love. A wrong turn taken by Maurice, Belle's father, causes the two to meet.

Beauty and the Beast

In the prologue, told through stained glass windows, an old beggar woman arrives at the castle of a French prince. The woman asks for shelter from the cold, and in return, offers the young prince a rose. Repulsed by her appearance, the prince turns her away. The beggar warns him not to judge by appearances, but the Prince ignores her and shuts the door on her. The woman then throws off her disguise, revealing that she is a beautiful enchantress. The Prince tries to apologize, but she has already seen the lack of kindness in his heart. She conjures a powerful curse, transforming him into a hideous beast, his servants into anthropomorphic household items, and the entire castle and all its surroundings into a dark, forbidding place, so that he will learn not to judge by appearances. The curse can only be broken if the Beast learns to love another and receives the other's love in return before the last petal of the enchantress's rose withers and falls; if not, he will be doomed to remain a beast forever. As the years pass, the Beast sits in his castle wallowing in despair, convinced that no one could ever love him.

Years later, a beautiful young peasant woman named Belle lives in a nearby village with her father, Maurice, who is an inventor. Belle is seen as "odd" by the other townsfolk due to her preference for reading books. She is the object of unwanted attention from the local hunter, Gaston, whom she perceives as an egomaniac and 'positively primeval', barbarian-brained, lunkhead. He and his sidekick, LeFou, openly mock her father's inventions and her love of books. Belle reveals her feelings of loneliness to her father, who promises her that his next invention, a wood-chopping machine, will be the start of a new life for them both.

Maurice rides off to a fair with his invention, but gets lost and loses his horse as night falls. He escapes from some wolves and desperately seeks shelter from a storm. Cold and tired, he stumbles upon a mysterious castle and enters. One by one, the enchanted household items - Lumire the candelabra, Mrs. Potts the teapot and her son Chip the tea cup and Cogsworth the clock and head of the household - welcome him. The Beast, however, is enraged when he discovers Maurice and is about to throw him out, not caring that the wolves would eat him, when Maurice says he needs a place to stay. The Beast then decides to lock him in a dungeon in the castle tower (against Maurice's wishes).

The next day, Gaston arranges a wedding ceremony right outside of Belle's house and invites the entire town. He invites himself in to propose to her and gives her an image of their life together -- "A rustic hunting lodge, my little wife massaging my feet, while the little ones play on the floor with the dogs; oh, we'll have six or seven [strapping boys, like me]". Belle attempts to politely decline when Gaston corners her against her front door and tries to kiss her. As she opens the door to move out of the way, he falls through the door frame and into the mud in front of the entire town. This serves as a hard blow to Gaston's ego.

Belle, who worries when her father's horse returns home without him, decides to seek out her father. Eventually, she winds up at the Beast's castle. The objects, their hope renewed with the arrival of Belle, show her the way to the dungeon while keeping themselves concealed from her sight. Belle finds Maurice in the tower dungeon, but the Beast catches her. She offers herself in exchange for her father's life, against his wishes, giving her word to remain in the castle forever. The Beast reveals himself to her, and although Belle is clearly terrified, she bravely refuses to back down from her offer. The Beast agrees and releases Maurice, who is taken back to the village in an walking coach before they can say goodbye. Moved by Belle's sadness, the Beast decides to give Belle a room in the castle instead of keeping her in the dungeon. The Beast gives Belle permission to go anywhere in the castle except the West Wing, refusing to explain why. He shows Belle her room and tells her that they must meet for dinner (at Lumiere's suggestion).

Back in the village, the citizens attempt to cheer up Gaston in the local tavern after Belle's rejection by reminding him how in awe they are of him. Maurice bursts in and asks for help to rescue Belle from "a beast", but no one believes him. When one of the villagers calls him crazy, Gaston thinks of a plan to get Belle to marry him. Maurice goes off to search for Belle alone, unaware of Gaston's plan. Gaston and the others arrive at the house shortly after Maurice leaves. Finding the house empty, Gaston orders LeFou to wait by the porch until Belle and Maurice return.

Belle meets the enchanted objects who cheer her up, but she refuses to have dinner with the Beast. Enraged, he tells the servants that if Belle does not eat with him, she will have to starve, then shuts himself away in the West Wing. He sees Belle through the magic mirror, who angrily cries that she will have nothing to do with the Beast. Melancholy, he watches one more petal fall from the rose. Ignoring the Beast's orders, Lumiere, along with the other servants, welcomes Belle warmly and entertains her with an elaborate dinner and a show. After dinner, Belle asks the servants for a tour of the castle. Lumiere and Cogsworth happily oblige, but Belle manages to sneak away from them and penetrate into the forbidden West Wing, where she discovers an extremely disarrayed and desolate room, a slashed portrait of a handsome man with strangely familiar blue eyes, and the enchanted rose. The Beast finds her there and frightens her with a terrifying display of temper. Belle flees the castle, disregarding her promise to the Beast, and, in the dark forest, is attacked by wolves. The Beast appears and fights off the vicious creatures, but is wounded during the fight; a grateful Belle returns to the castle and, while tending to the Beast's wounds, thanks him for saving her life. Over some time, the two start to become friends. The Beast even gives Belle "ownership" of his immense library. The household items are excited and optimistic that Belle may fall in love with the Beast and cause them to become human again. The relationship reaches its climax with an elegant dinner and ballroom dance.

After the romantic evening, The Beast notices that Belle seems melancholy. She tells him that she wishes to see Maurice again, just for a moment. The Beast takes her to the West Wing and gives her the magic mirror, explaining that it will allow her to see anything she might desire to see. Belle asks if she can see her father and the magic mirror reveals that Maurice is lost and sick in the forest. The Beast, having fallen in love with Belle, releases her to rescue her father and also gives her the mirror so that she may look back and remember him. Belle hurries off, finds Maurice and takes him back to the village, where a mob gathers to take him to the asylum. Gaston offers to have Maurice spared if Belle agrees to marry him but she still refuses. Belle uses the magic mirror to show the Beast to the villagers, who become frightened at his hideous visage. Belle assures them that the Beast is kind and gentle, and that he's her friend. Out of jealousy and anger, Gaston tells the mob that Belle is as crazy as her father. Belle disagrees and calls him the real beast for wanting to kill him. She tells him off that she sees him as nothing more than a sexist, narcisstic, rude, obnoxious and selfish jerk. Insulted, Gaston rallies the villagers to storm the castle and "kill the beast," convincing them that he is dangerous to the entire town. To prevent Belle and Maurice from warning the Beast, Gaston has his men lock them in the cellar of their home.

With the help of Chip the teacup, who has stowed away in Belle's satchel, Belle and Maurice escape from the cellar using the invention and rush back to the castle. The villagers force open the door, but Lumiere leads the servants in defense of the castle. Gaston deserts the battle to search for the Beast. The servants eventually manage to drive the villagers out of the castle.

Meanwhile, Gaston finds the Beast alone in the West Wing and attacks him, throwing both of them outside on the balcony and rooftops. The Beast does not defend himself because he has given up hope of being able to see Belle again. As soon as he sees Belle arriving at the castle, calling out for him, the Beast gains the will to fight Gaston. A heated battle ensues between the two, culminating when the Beast grabs Gaston by the neck and threatens to throw him off the roof. Gaston begs for his life, and the Beast relents, softened by his love for Belle. He tells Gaston to leave and never come back, and then throws him aside. When the Beast climbs back up to the balcony where Belle is waiting for him, Gaston stabs him in the back, then loses his footing and falls into the deep chasm far below, signalling his death.

Belle tries to reassure the badly wounded Beast that everything will be fine, but he knows that his wound is fatal. The Beast tells her that he was happy to see her one last time, and dies succumbing to his injury. Belle, in tears, whispers that she loves him, just before the last petal falls from the rose. The spell is broken. The Beast, brought back to life, is reverted to his human form, unrecognizable until Belle looks into his blue eyes. The castle becomes beautiful again and the enchanted objects turn back into humans. The last scene shows Belle and the prince dancing in the ballroom while her father and the objects watch and they live happily ever after.

Bonuses to Beauty and the Beast (Blu-ray + DVD)