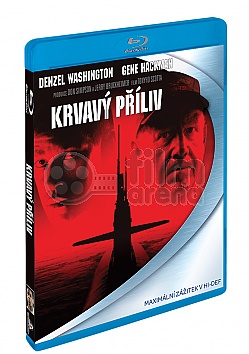 When some Russian rebels takes control of some ICBM's, the Americans mobilize. Among the vessels sent is the nuclear sub, the Alabama. But before they leave they need a new X.O. and among the choices is Commander Hunter, who hasn't seen much action. But the ship's Captain, Ramsey OK's him. While on the way, there was an incident and Hunter disagreed with how Ramsey handled it, it's evident that Ramsey doesn't think much of Hunter because Hunter was college educated while Ramsey worked his way up. They're given orders to attack but when they were in the process of receiving another order, the ship's communications were damaged, so the entire message was not received. Ramsey decides to continue with their previous order while Hunter wants to reestablish contact first. That's when the two men butt heads that ends with Hunter relieving Ramsey. Later when some men die, some of the officers feel that Hunter is not up to the task so they team up to retake control. But Hunter has taken precautions.

A rebel force has taken over nuclear missile launch sites near Vladivostok in Eastern Russia. The leader of the force, a radical Russian named Radchenko (Daniel von Bargen), threatens to launch the missiles he has seized. Radchenko's forces, about 60,000 strong, have also gained control of three Akula-class attack submarines to protect the shores off Vladivostok.

The United States summons the officers and crew of the nuclear submarine Alabama, which is being dispatched to patrol the coast of eastern Russia. If necessary, the Alabama will be available to launch nuclear missiles to stop Radchenko's forces before they can launch their hijacked missiles.

Commander Ron Hunter (Denzel Washington) of the US Navy is called into an interview with the Alabama's CO, Captain Ramsey (Gene Hackman). The Alabama's executive officer (XO) is ill and a replacement is needed. Ramsey is impressed with Hunter's service record and the two connect over horse riding. Ramsey's Jack Russell Terrier also seems to approve of Hunter.

The situation in Vladivostok escalates and Hunter and his friend, Lt. "Weps" Ince (Viggo Mortensen), are called up for duty and leave immediately for the Alabama. Ramsey gives a stirring send-off speech and the boat puts to sea. Before they submerge, Ramsey and Hunter enjoy cigars.

At an officers' dinner, Ramsey and the crew pontificate about the threat of nuclear war. Ramsey is eager to know Hunter's views on the subject, especially since the XO has a degree in philosophy. Hunter states the the true nature of war is to serve itself and leave the world destroyed. Ramsey takes the opinion seriously although he seems to disagree with his XO.

On patrol off the eastern coast of Russia, the Alabama runs drills. When a fire breaks out in the galley, Hunter rushes to help put the blaze out. At that moment, Ramsey orders a missile launching drill to be performed. Hunter is perturbed that Ramsey would order a drill in the midst of an emergency but reports to the bridge to oversee the transfer of coded transmissions and report to Ramsey. During a lull in the drill, Hunter informs the captain that the fire in the galley could flare up again but Ramsey dismisses him, concentrating on the drill. A report comes in from below decks; one of the crew has suffered a heart attack. Ramsey cancels the drill and goes below to check on the crew member, who has died.

Ramsey orders Hunter into his cabin and reprimands him for trying to interrupt the drill. Hunter calmly counters that the fire needed more attention and that the captain's calling for a drill had jeopardized the safety of the boat. Ramsey tells the XO that confusion aboard a submarine is something to be taken advantage of. Hunter still obviously disagrees, however, he chooses not to say so.

The Alabama receives an emergency action message (EAM) informing them that Radchenko is very close to breaking the codes for missile launch and that the US defense readiness has been raised to DEFCON 3. Further patrols with the Alabama's crew on even higher alert will be necessary. A fight breaks out between a petty officer, Rivetti (Danny Nucci), and another man, Bennefield (Eric Bruskotter) over the origins of the Silver Surfer and Hunter breaks it up, telling Rivetti to act like a leader. Hunter reports to Ramsey about the altercation and the tension amongst the crew over the their current state of readiness. Ramsey announces to the crew over the boat's PA system that infighting will not be tolerated and the threat of war is of the utmost importance.

In the sub's sonar cabin, Rivetti and his unit detect an enemy submarine, possibly one of the Akulas that Radchenko has command of. Ramsey orders him to identify the sub and orders an evasion maneuver to escape detection by the Akula. An EAM arrives seemingly ordering a launch of the Alabama's missiles. Ramsey orders the procedures for launch to be initiated. Another EAM comes in but the Alabama is too deep to receive it. Hunter requests that the sub's buoy be launched to receive the EAM. The buoy winch fails, causing noise and alerting the Akula to the Alabama's location. The Akula attacks with torpedoes. The Alabama successfully evades the torpedoes, one of which explodes very close, severing the buoy cable. The Alabama suffers minor damage, the Akula disappears from sonar and the buoy cable is severed, cutting off the EAM. Additionally, the radio equipment has suffered severe damage and no messages are going out or coming in.

Ramsey and Hunter review the EAM, finding that the message doesn't contain any clear order. Hunter recommends that the Alabama surface to receive the rest of the message, but Ramsey refuses, saying it's too dangerous with the Akula still nearby. Ramsey intends to continue with the launch of his missiles, but Hunter quickly disagrees, saying the incomplete message could be a target package change or an order to cancel the launch. Ramsey counters saying that the message is not a complete order and not to be followed up upon and orders Hunter to repeat his command to launch. Hunter refuses under Navy regulations, citing the fact that Ramsey's order must be repeated for it to stand, concluding that the captain is acting irrationally. When Ramsey will not concur with Hunter, the XO orders Ramsey to be arrested and locked in his cabin. A hesitant Chief of the Boat concurs with the XO and has the captain detained. Hunter assumes command and informs the crew that they will still patrol, at the same state of readiness, and attempt to re-establish communications to verify the EAM.

On sonar, the Akula reappears and attacks, launching torpedoes. Hunter orders an evasion plan and the Alabama avoids being hit. Hunter launches two more torpedoes which connect with their target and destroy the Akula. However, a last torpedo was launched by the Akula before it was destroyed and explodes very close to the Alabama. Propulsion is damaged and the bilge bay takes on water despite the efforts of several crew members to contain it. The men in the bilge bay drown when Hunter orders the bilge bay sealed. Meanwhile, the Alabama is sinking rapidly, approaching a depth of 1850 feet, where the intense water pressure will crush the hull. Propulsion is restored before the boat can be destroyed and the boat rises to a safe depth.

Several of Ramsey's officers decide that Hunter is unfit for command and they plot a counter-mutiny to free Ramsey. They persuade Weps to join them and give them the key to the weapons locker to take the sub back by force. They free Ramsey, who follows the armed men back to the bridge where they arrest Hunter and the other officers who aided him in the mutiny. Ramsey assumes command and order the launch to continue. While in detention, Hunter talks philosophically about the choice to launch nuclear missiles and start the destruction of the world.

Rivetti, while walking between cabins, is stopped by the same man he fought with earlier. Rivetti is able to overpower the larger man and free Hunter and the other arrested officers. They make their way back to the bridge to stop Ramsey from launching. After a tense altercation in the weapons cabin which delays Ramsey long enough for Hunter to seize the master missile key, the two face off on the bridge. Ramsey hits Hunter in the face twice, demanding his missile key back. Communications reports that the radio is very close to being operational. Ramsey allows three minutes for the radio to operate again and receive another EAM. The two sit in the command center, awaiting the message. While they do, Ramsey lights a cigar and brings up the subject of horse riding again, saying that Lipizzaner stallions are from Portugal. Hunter tells the captain they're Spanish horses, born with a black color and turn white later in life. Ramsey still insists they're from Portugal.

Rivetti reports that the EAM transmitter is fixed and that a new EAM is coming in. It's brought to the bridge and authenticated. When authenticated, the message is for the Alabama to stand down and cancel the launch of their missiles. Ramsey retires himself from the bridge and is saluted as he walks to his cabin.

In Pearl Harbor, Hawaii, a general inquiry is called before the Pacific Fleet admiral (Jason Robards). Having reviewed the incident, he tells both Hunter and Ramsey that they both were right and wrong in their actions aboard the Alabama. Off the record, he admonishes both of them, saying they've done much to disrupt the traditional chain of command of the Navy. The admiral also announces, to Hunter's surprise, that Ramsey has filed for retirement. Hunter is further astonished when he hears that he is to be given a captain's commission aboard another submarine and that he came highly recommended by Ramsey himself.

Outside Navy HQ, Ramsey is retrieving his dog from an ensign. He sees Hunter and tells him that he was right, about the Lipizzaner stallions being from Spain. The two smile and salute each other.