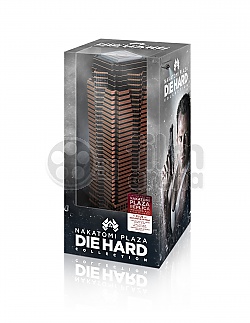 New York City Detective John McClane has just arrived in Los Angeles to spend Christmas with his wife. Unfortunatly, it is not going to be a Merry Christmas for everyone. A group of terrorists, led by Hans Gruber is holding everyone in the Nakatomi Plaza building hostage. With no way of anyone getting in or out, it's up to McClane to stop them all. All 12!

After the terrifying events in LA, John McClane (Willis) is about to go through it all again. A team of terrorists, led by Col. Stuart (Sadler) is holding the entire airport hostage. The terrorists are planning to rescue a drug lord from justice. In order to do so, they have seized control of all electrical equipment affecting all planes. With no runway lights available, all aircraft have to remain in the air, with fuel running low, McClane will need to be fast.

Die Hard: With a Vengeance

John McClane is now almost a full-blown alcoholic and is suspended from the NYPD. But when a bomb goes off in the Bonwit Teller Department Store the police go insane trying to figure out what's going on. Soon, a man named Simon calls and asks for McClane. Simon tells Inspector Walter Cobb that McClane is going to play a game called "Simon Says".

He says that McClane is going to do the tasks he assigns him. If not, he'll blow off another bomb. With the help of a Harlem electrician, John McClane must race all over New York trying to figure out the frustrating puzzles that the crafty terrorist gives him. But when a bomb goes off in a subway station right by the Federal Reserve (the biggest gold storage in the world) things start to get heated up.

When someone hacks into the computers at the FBI's Cyber Crime Division; the Director decides to round up all the hackers who could have done this. When he's told that because it's the 4th of July most of their agents are not around so they might have trouble getting people to get the hackers. So he instructs them to get local PD'S to take care of it.

And one of the cops they ask is John McClane who is tasked with bringing a hacker named Farrell to the FBI. But as soon as he gets there someone starts shooting at them. McClane manages to get them out but they're still being pursued. And it's just when McClane arrives in Washington that the whole system breaks down and chaos ensues.

A Good Day to Die Hard

Iconoclastic, take-no-prisoners cop John McClane, for the first time, finds himself on foreign soil after traveling to Moscow to help his wayward son Jack - unaware that Jack is really a highly-trained CIA operative out to stop a nuclear weapons heist. With the Russian underworld in pursuit, and battling a countdown to war, the two McClanes discover that their opposing methods make them unstoppable heroes.

John McClane, a detective with the New York City Police Department, arrives in Los Angeles to attempt a Christmas reunion and reconciliation with his estranged wife Holly (Bonnie Bedelia), who is attending a party thrown by her employer, the Nakatomi Corporation, at its still-unfinished American branch office headquarters, the high-rise Nakatomi Plaza. When McClane refreshes himself from the flight in Holly's corporate room, they have an argument over the use of her maiden name, Gennero, but Holly is called away.

As the party continues, a convoy of trucks makes its way to the building. Two men, Karl (Alexander Godunov) and Theo (Clarence Gilyard Jr.), arrive at the front desk to divert security's attention away from the trucks. Karl guns down the guards while Theo commandeers the closed circuit security field. Terrorists led by German anarchist Hans Gruber (Alan Rickman) emerge from the trucks and hold the partygoers as hostages in exchange for terrorist operatives in prison. In the confusion, McClane was able to disappear unnoticed into the building's maintenance areas, and learns that Gruber is actually using the hostage situation as a cover to steal $640 million in bearer bonds stored in the building's vault. McClane is unable to stop Gruber from executing Joe Takagi, Holly's boss, when he refuses to hand over the vault's combination.

McClane attempts to alert the local police by setting off the fire alarm, but this fails, and he is promptly discovered by Karl's brother, Tony. McClane kills Tony, taking his gun and radio, which he uses to contact the LAPD. Karl demands vengeance, and convinces Gruber to send two more henchmen, Marco and Heinrich, to neutralize him. McClane kills them both and secures a quantity of C4 explosives and all the crucial detonators which Heinrich was setting into prepared explosives. Sergeant Al Powell (Reginald VelJohnson) arrives to check the building, finds nothing amiss and drives off, but McClane gets his attention by Marco's corpse onto Powell's patrol vehicle. The situation rapidly escalates, and the SWAT team arrives to storm the building. However, Theo notices their movements on the security feed and alerts Gruber. McClane attempts to get Powell to stop the SWAT team from walking into a trap, but Powell cannot convince his superiors. The SWAT team is repelled, the SWAT armoured vehicle is disabled by a rocket launcher, and the police are out-gunned by the firepower of the terrorists. McClane drops C4 down the elevator shaft and destroys the entire floor where the terrorists are firing from, giving the cops a chance to retreat. This attracts the attention of the press, led by sleazy reporter Richard Thornberg (William Atherton), and the FBI, led by Special Agent Johnson (Robert Davi).

As the remainder of Gruber's men attempt to find McClane and the detonators, one of the hostages, Harry Ellis (Hart Bochner), betrays McClane's identity to Gruber. Gruber uses the radio to contact McClane, and demands that McClane return the detonators or else he would shoot one of the hostages. McClane refuses, and Gruber kills Ellis, to the horror of the police force who heard everything on radio. McClane continues to keep moving through the building to try to learn Gruber's plans. McClane and Gruber accidentally meet but Gruber gains McClane's trust by passing himself off as an escaped hostage. But then Gruber's identity is discovered as he threatens to shoot McClane. When Gruber's men arrive, McClane flees, dropping the detonators.The FBI shut off the building's power while they plan a helicopter raid onto the roof. However, Gruber had planned for the FBI's predictability - disconnecting the power opened the final electromagnetic lock on the vault and gave him access to the bonds. He has used the recovered detonators to rig the helipad on the building's roof with explosives, knowing the FBI would attempt a sneak gunship attack on the building. After the FBI informs Gruber that his demands have been met, Gruber's men force the hostages to the roof to be killed by the explosions, so they could escape in the confusion. McClane, after fighting off Karl and failing to warn the police of the Gruber's doublecross, is able to get the hostages back inside safely, but the FBI helicopter shoots at him, believing he's one of the terrorists. The helipad explodes, the helicopter is destroyed and Johnson is killed in the explosion.

Gruber has discovered from Thornberg's investigative newscast that Holly Gennero is McClane's wife. He holds her hostage to prevent McClane from interfering in his getaway. McClane, down to his last two bullets, is able to lull Gruber into a trap, killing the last remaining terrorist and wounding Gruber, who falls backwards and out of the building through a window. Gruber manages to hang onto Holly's wristwatch, his weight dragging her out the window as well. McClane is able to unstrap the watch and lets Gruber fall to his death. Meanwhile, Theo is detained by McClane's limo driver, Argyle, after collecting the bonds. McClane and Holly leave the building together, and meet Powell face to face for the first time. Karl comes out behind McClane and Holly with an assault rifle, but Powell, who had previously confessed to McClane that he had not fired a gun since he accidentally shot a child years ago, draws and shoots him before he can harm McClane and Holly. Thornberg attempts to interview them as they are leaving the scene, Holly punches him in the face. McClane and Holly take off in Argyle's limo as the building is secured by the police.